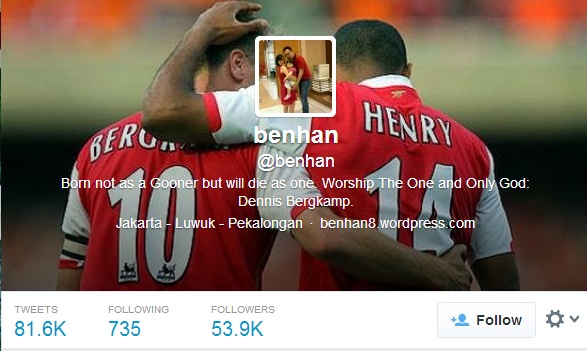 Benny Handoko (@benhan) was placed on probation for one year after being accused of defamation of a politician, under Indonesia's Electronic Information and Transactions law.

Popular Indonesian Twitter user Benny Handoko, @benhan on Twitter, was sentenced to one year of probation late last month, after being found guilty of defaming a former politician.

Handoko tweeted on Dec. 7, 2012 about former Prosperous Justice Party (PKS) member Mukhamad Misbakhun (@misbakhun), calling him a crook who had stolen from Century Bank, the embattled financial institution at the center of a 2008 scandal in which lawmakers pushed excessive bailout funds to certain banks as part of a larger money-making scheme. Handoko rose to Twitter fame because of his sharp commentary on the scandal.

"As long as the draconian ITE law exists, it will remain a pernicious threat to Indonesian democracy. It is time for Indonesia to seriously consider proposals to discard the law and embrace Internet legislation that upholds international human rights doctrine."

The Indonesian Supreme Court overturned the conviction of Mukhamad Misbakhun and Misbakhun filed a complaint about tweets about him. Public domain photo.

In 2010, Misbakhun was sentenced to two years in jail for forging documents to acquire a loan from the bank. Misbakhun soon after resigned from his party and eventually lost his seat in Congress. But in July 2012, the Supreme Court overturned the 2010 conviction.

Misbakhun threatened that if Handoko did not apologize for his tweets calling Misbakhun a crook, he would sue Handoko for libel. But the Twitter celeb refused to apologize, arguing that he based his comments on news reports.

Misbakhun later filed a police complaint against Handoko, which ultimately led to the case brought against Handoko. In assessing charges, the prosecutor cited controversial Law No. 11/2008 on Electronic Information and Transactions (ITE).

Many Indonesians, especially avid social media users, are voicing support for Handoko. Supporters see his case as a sign of rising Internet regulation and censorship in the country.

Media freedom advocates have long lobbied for the review and even repeal of the ITE, as it is often used by politicians to silence critics. They specifically highlight Article 27, Paragraph 3 of the law, which gives a person or authority the right to file slander charges against a person or entity if he or she feels insulted or degraded by a particular publication under that entity’s control.

After Handoko’s verdict was announced, concerned Indonesians immediately expressed fear that it would have a negative impact on freedom of expression in the country. They added that it might discourage whistleblowers from coming out to expose corrupt practices in the government and society.

For his part, Misbakhun advised netizens to learn from the trial of Handoko by being more careful and responsible before posting messages online. He reiterated that free expression must not be abused by hurling unfair and malicious accusations against other persons.

Handoko has yet to decide whether he will file an appeal.

Beyond the legal fight between Handoko and Misbakhun, the case could mark a turning point in the future of Indonesia’s free media. As long as the draconian ITE law exists, it will remain a pernicious threat to Indonesian democracy. It is time for Indonesia to seriously consider proposals to discard the law and embrace Internet legislation that upholds international human rights doctrine.

Mong Palatino is an activist, two-term member of the Philippine House of Representatives and Southeast Asia Editor of Global Voices.

This piece originally appeared on Global Voices Advocacy. Global Voices Advocacy is a project of Global Voices Online. It is a global network of bloggers and online activists dedicated to protecting freedom of expression and free access to information online. It reports on threats to online speech, share tactics for defending the work and words of netizens, and support efforts to improve Internet policy and practice worldwide. Check out Global Voices Advocacy’s website or follow them on Twitter or Facebook.