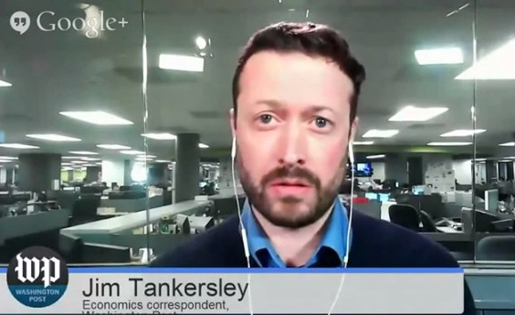 The Washington Post's Jim Tankersley joined our podcast to discuss changes happening at the Post.

This week, the Washington Post’s Ezra Klein joined a growing group of big-name journalists leaving traditional news outlets for ones that promise to be at the edge of digital innovation. Ezra Klein is bound for his own venture within the digitally native Vox Media, while the New York Times’ David Pogue and ABC’s Katie Couric both left for Yahoo. The New York Times’ Nate Silver left for ESPN. Meanwhile, these establishment news sources are scrambling to catch up to their start-up peers. The Washington Post’s Marty Baron recently announced a flurry of innovations to make the newspaper more digitally relevant, including a new initiative that will explain the real-world impacts of public policy headed by Jim Tankersley. The National Journal’s executive editor Adam Kushner will also start a new opinion venture at the Post. On this episode of the Mediatwits, we’re joined by special guests Jim Tankersley of the Washington Post and NPR’s Elise Hu to talk about the emigration of journalists to digital media outlets, and how traditional outlets are reacting. Regular panelists Monica Guzman of the Seattle Times and Geekwire and Andrew Lih of American University will join as well. PBS MediaShift’s Mark Glaser will host, as usual.

Elise Hu covers technology and culture for NPR’s on-air and online platforms. She joined NPR in 2011 to head up the digital launch of StateImpact, a DuPont award-winning public policy reporting network. Previously, she was a founding journalist at the non-profit digital news startup, The Texas Tribune. While working as a political reporter, she also oversaw the Tribune’s social and multimedia journalism, statewide television partnerships and toyed around with new story forms. Elise’s work has earned a Gannett Foundation Award for Innovation in Watchdog Journalism, a National Edward R. Murrow award for best online video andThe Austin Chronicle once dubiously named her the “Best TV Reporter Who Can Write.”  Outside of work, she’s an adviser to the John S. and James L. Knight Foundation and serves as a regular panelist for the Knight News Challenge.

Jim Tankersley is an economic policy reporter for The Washington Post, where he explains complex public policies and illuminates their human impact. Before joining The Post, he wrote for National Journal, covering the breakdown in American job creation, the decline in economic mobility and the failure of policy makers to adapt to an increasingly complex set of global economic challenges.  He has also worked at the Tribune Washington Bureau, the Toledo Blade, the Rocky Mountain News and The Oregonian. Jim and a colleague at The Blade won the 2007 Livingston Award for Young Journalists for their “Business as Usual” series of stories revealing the true roots of Ohio’s economic decline. He was also part of the “Coingate” team at the Toledo Blade that was a finalist for the Pulitzer Prize.

As the Neiman Journalism Lab pointed out in a recent piece, the past year has been marked by an outpouring of new media ventures headed by well-known journalists. In addition to Ezra Klein’s Vox Media venture, there’s Pierre Omidyar and Glenn Greenwald’s First Look Media, Nate Silver’s FiveThirtyEight at ESPN, and the transplant of AllThingsD to a new venture backed in part by NBC Universal called Re/code. How will these new media ventures change the landscape of digital news media? And how successful will the efforts of traditional media outlets be to catch up? Additionally, what does this recent outpouring of digital innovations at the Post indicate about the direction Jeff Bezos is taking the paper?