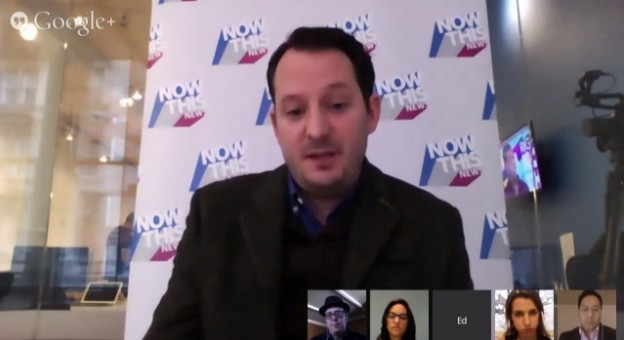 NowThis News Editor-in-Chief Ed O'Keefe joined the podcast this week to discuss video and social content in the media industry.

As smartphones and tablets proliferate, news video is going mobile and picking up where broadcast news left off. Network evening news audiences have been dwindling for decades — from audiences of over 50 million in 1980 to this year’s 22.1 million — while online video use has skyrocketed. Traditional print pubs such as New York Times, Washington Post and WSJ have pushed deeper into video while startups such as NowThis News, Newsy and Storyful use quick videos, some as short as six seconds, to deliver news. In recent months, all three startups have established collaborations or have been acquired by traditional media outlets. This week, NBC News and NowThis News announced a partnership that will give the former around a ten percent stake in the startup. In December, media conglomerate E.W. Scripps acquired Newsy, and News Corp. acquired Storyful. This week, in our return from winter break, the Mediatwits will chat with NowThis News editor-in-chief Ed O’Keefe about the rise of short news video content. As usual, PBS MediaShift’s Mark Glaser will host the show, and we’ll be joined by regular panelists Andew Lih of American University and Monica Guzman of the Seattle Times and Geekwire.

Ed O’Keefe is the Editor-in-Chief of NowThis News. Previously, Ed served as Executive Producer of ABC News Digital. He lives in New York City, and you can follow him on Twitter @nowthised.

NowThis News is pushing into mobile video news, but many members of its team come from traditional outlets, including the Washington Post, NBC Universal and ABC News, among others. Founded in 2012, the startup produces scores of short videos per day. Realizing that social media platforms can serve as a pipeline for news, NowThis creates content designed for Snapchat, Vine and Instagram. Compared to traditional media outlets that are beginning to dip their toes into social media, NowThis is distinct for using these channels to provide news rather than promote their programs. Since its recent NBC News partnership, the start-up’s videos will be available for use by NBC TV programs.

The rise in video startups comes at a time of uncertainty in the digital media world, with a Tuesday federal appeals court decision that invalidated Net neutrality rules on the web. The ruling swept aside previous Federal Communications Commission efforts to ensure that network providers treat all Internet traffic equally. Now, Internet companies with more funds might be able to pay for prioritized service, placing underdogs such as video startups at a disadvantage. The effect these changes might have on news video companies remains to be seen.

What are the big innovations these startups bring to bear? Can traditional broadcasters adapt?