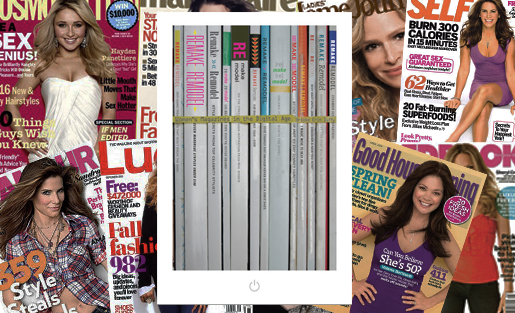 In her new book "Remake/Remodel: Women’s Magazines in the Digital Age" Brooke Erin Duffy suggests that women’s magazines’ adaptation to industry trends and technology could change them in subtle but fundamental ways.

Women’s magazines are full of fashion, beauty and relationship tips. However, studying them has also taught one researcher a lot about their future, and about the future of the magazine industry as a whole.

Brooke Erin Duffy, an assistant professor in the School of Media and Communication at Temple University, explains her findings in her new book “Remake/Remodel: Women’s Magazines in the Digital Age.” Duffy suggests that women’s magazines’ adaptation to industry trends and technology could change them in subtle but fundamental ways. Her analysis shows how gender, profit, leadership and technology are all intertwined at women’s magazines, with real consequences for publications and readers. I talked with Duffy about her research.

“In both scholarship and the popular press, women’s magazines tend to be disregarded, or not seen as real sources of journalism. I wanted to make a contribution to suggest why they are important to study. They reveal a lot about larger changes.” -Brooke Erin Duffy

Everything Old is New Again

“Women’s magazines historically have helped to foreshadow a lot of the changes going on in larger media industries, whether it’s creating content targeted for a niche audience, or the murky relationship between advertising and editorial,” she said.

Of course, women’s magazines aren’t alone today in testing new ways to combine editorial content and advertising. However, Duffy argues that given women’s magazines’ historical willingness to blur these boundaries, and the ease of developing sponsored content related to their usual topics, publishers may be more open to less traditional possibilities. As an example, Duffy described how sponsored content about hair products could be easily integrated into a magazine’s content.

Those who worked solely on print publications still supported a strong “church and state” barrier between editorial content and advertising, and described how they worked to avoid mentioning advertisers in editorial content.

However, staff who worked on digital aspects of magazines — especially on their tablet publications — didn’t seem to share that perspective.

“On the web, [blending advertising and editorial] was seen as much more OK, especially on the iPad. There’s not this deeply entrenched culture and an understanding of what the medium is,” Duffy said. “On the iPad, people were talking about, ‘We can feature these exclusive advertising opportunities. Held horizontally, the ad can come to life this way.’”

Beyond advertising, differing expectations about print and digital magazines’ content led to confusion and frustration at some companies, Duffy found. In some cases, people who worked on the print publications didn’t know who their managers were, couldn’t tell if they should take direction from the print or digital leaders, and weren’t sure how to craft content for one or both formats.

“I was talking to an editorial assistant about how even though she was assigned to the print magazine, she had a lot of great ideas that would help propel the website. But every time she proposed something, her boss would say, ‘Condé Nast Digital doesn’t want us doing that,’” Duffy said. “It was like a shadowy force, like the Wizard of Oz.”

Duffy realized from her research that boundaries among media formats are often still quite rigid, despite today’s talk about media convergence and the alleged blending of print and digital media.

“People working in these had very clear senses of where they worked. The church-state relations is one of those examples. People were clinging to the idea that print is different from the iPad from online,” Duffy said.

“Companies are trying to bring in people who understand digital, and the assumption is that men understand digital,” Duffy said. “Women may be getting phased out of this industry in terms of higher leadership roles. Some of the senior leaders and digital specialists [now] tend to be male.”

This issue isn’t new. As Duffy noted, in 1970, about 200 feminist activists held a sit-in at Ladies’ Home Journal magazine, demanding that the editor-in-chief be female and that the magazine portray women more positively. Three years later, a woman finally became editor.

Does it matter that men may now have a stronger say in the content of women’s magazines, especially for their digital formats? “Historically, there was the idea that producers should mirror the audience,” Duffy said.

Inviting Women in, for a Price

Even as leadership changes, women’s magazines are inviting more contributions from their audiences, though that crowdsourcing raises its own set of problems. Again, Duffy mentioned Ladies’ Home Journal, this time for its crowdsourcing experiment (previously reported here at MediaShift), which invited more female readers’ voices into the pages of the print magazine.

“In a lot of ways, [the women’s magazines] are doing a good job because there are so many interesting outlets, promotions, and user-generated contests,” Duffy said. “They’re finding some innovative ways to engage audiences.”

But participation in some of these activities — particularly those that require using social media — may present risks most consumers don’t realize. These engagement efforts invite women into participation in the magazine with a hidden price: their user data.

“From a more critical stance, I don’t think people realize the extent to which their information is being used … I think the consumer stance can be highly problematic for some of these contests,” Duffy said.

Duffy’s research asks us to seriously consider the issues faced by women’s magazines and their readers, and shows how larger industry trends might affect this genre of magazine differently.

“In both scholarship and the popular press, women’s magazines tend to be disregarded, or not seen as real sources of journalism. I wanted to make a contribution to suggest why they are important to study. They reveal a lot about larger changes,” Duffy said. “Women’s magazines are of critical importance.”