Q&A with Dan Archer: Comics Journalism and the Power of Collaboration 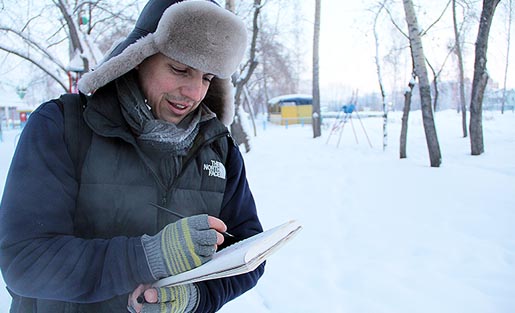 Dan Archer is a unique visual journalist who creates comics to tell all kinds of stories, from investigative to explanatory. Archer was a 2011 Knight Fellow, spending his time at Stanford working on ways to promote comics journalism as a legitimate, innovative way of news storytelling. These days, Dan is focused on telling investigative stories. His pieces have been published by The Guardian, The Huffington Post, BBC, America Public Media and several other outlets. In this recent interview, Dan talks about using Kickstarter to fund a recent major project, the challenges of comics journalism and the impact of his Knight Fellowship.

"At the end of the day the goal is to give the reader a unique reading experience while simultaneously moving, informing and entertaining them in equal share." -Dan Archer

Q: What exactly is comics journalism and how is it different from traditional forms of journalism?
Dan Archer: Comics or graphic journalism is an umbrella term that covers any approach to reporting using both words and images together, as opposed to the conventional model — text with separate illustrations. The main difference is that stories are filed as few pages of artwork with text inside speech balloons or captions.

They are not comic strips — three or four panels with a punch line at the end, such as Garfield or Doonesbury. They are not single panel editorial cartoons, which use symbolic or reductive imagery to express (or solicit) an opinion. They are not intrinsically “comic” or funny.

Within graphic journalism there are different offshoots, such as:

(For more information check out my introduction to comics journalism for Poynter.)

How do you do the reporting for your journalistic comics?
Archer: Depending on which of the categories an assignment falls into, I’ll take along an audio recorder, usually an iPhone, a sketchbook, some pens and a travel watercolor set if I have time to add color. The information gathering process is the same as in traditional text-based journalism: conducting interviews, noting down quotes and, if possible, taking reference photos.

The main difference is that I’ll also be sketching character tics and the way that my interviewees move, their body posture, to better capture their personality when I draw up the final artwork. I’ll often also sketch out the floor plans of rooms where the events they are describing take place, or some of the details they mention in their accounts, to ensure accuracy. For example, I drew this quick sketch of the floor plan of a restaurant and based on it, then drew this draft of where people were at in the scene to show to my interview subject to make sure my information was correct.

All of my notes (visual and textual) come together on the same page, and I’ll throw some watercolor on there too, if there’s time. Then I’ll take those pages home and arrange the structure of the piece. This stage involves sketching up thumb-nailed pages to give my editors a rough outline of the page composition and pacing. Here is an example of one of the draft panels from the human-trafficking piece I did for the BBC.

Once they approve it, then I draw up the artwork at original size, scan it in, color it in Photoshop, apply the lettering digitally for easier edits and turn everything into finished pages to send, either as TIFFs for print or JPEGs for the web.

What is your main challenge in deciding on which stories to tell in this format? Can you create a journalistic comic for any story?
Archer: Some stories certainly lend themselves better to the medium than others. You want to avoid “talking heads” comics, which are essentially direct dialogue with superfluous illustrations. In those cases, bringing in the visual doesn’t add much to the reader’s experience. But I believe that even a few hand-drawn sketches of an event can capture a situation in a more immediate, impactful way than photos can.

I tend to shy away from the “explainer” type of comics journalism these days for the simple reason that I think too often comics are associated with the requisite process of simplification — plus I prefer to work in the field.

The main challenge is tying a journalistically rigorous story to a visual narrative thread that combines drama with a pleasing aesthetic. At the end of the day the goal is to give the reader a unique reading experience while simultaneously moving, informing and entertaining them in equal share. Nothing ambitious!

Why did you decide to focus on stories about human rights?
Archer: It’s about giving people who don’t usually have an outlet to speak the ability to have their voices heard. Often those who are most marginalized (be they trafficking survivors, undocumented immigrants or homeless) are the least willing to have their faces put on camera, understandably. By sketching them I’m able to create more of a connection, and show them the way that they will be represented on the page. The act of sketching helps to establish a rapport with the interviewee and often leads to a more fruitful discussion, helping both me and the subject to lower our guards and talk more openly as we watch the picture come together.

Through my work I hope to draw reader attention to subjects that they might overlook, if the same stories were presented in text alone. The same goes for the devices and techniques of visual storytelling: as opposed to video or photojournalism, comics journalists are able to give the reader a first person perspective by putting them in their shoes on the events that they are reporting. This is especially important in the context of human trafficking, where all too often the survivors are shown as the third person “other” – typically young girls with their eyes blacked out, or shown through grainy night vision photography. I wanted them to present their experience without resorting to any of those visual clichés.

Last year you successfully raised money through Kickstarter to fund a graphic journalism project on human trafficking in Nepal that includes a graphic novel and web comics. Why did you decide to seek crowd funding?
Archer: Crowd-funding was one of the many strategies I used in addition to grant writing, serializing my work to assorted outlets in print and online, and partnering with NGOs to conduct interviews and fieldwork surveys.

The main advantage of crowd-funding was to create a dialogue between me and my readers, which continues to this day. I was able to share updates, both while I was in the field and back home in California, and receive immediate feedback. It helped get the word out about the project across social media and create an informal network of champions who were invested in disseminating my work while I was in the field. Not to mention the small matter of creating a guaranteed customer base for when the project is finally finished.

However, to fund my work I’ve also created a visual consultancy called Graphic Voices that provides visual storytelling solutions to companies, newsrooms or NGOs who don’t have their own in-house creative teams.

What kind of response has the Kickstarter project received so far?
Archer: The reaction to the project has been phenomenal: one highlight was in April when the BBC publishedpart of my work on its website, which then went viral and got millions of hits within days of launching. The other was having both USAID and Humanity United backing a project to measure the effectiveness of different types of media (text brochures, comics, radio, posters) in remote regions of Nepal. Data gathering is due to begin next month.

In order to make this model sustainable, we need to encourage readers to put their money where their eyeballs are and pay for well-crafted, long-form content that they appreciate. For an example, Issue 1 of my graphic novel based on my experience of reporting on trafficking in Nepal is available for purchase here.

What did you learn at Stanford that has influenced your approach to comics journalism?
Archer: Don’t expect to get things right first time – continue to refine and hone your approach over multiple iterations. Be more open and receptive to feedback. Avoid working in a vacuum – it’s amazing the different responses you can get from diverse readers when you give them the same page of comics. Never underestimate the power of collaboration: I was lucky enough to work with a number of my cohort both during and after my fellowship year, and see how they approached their respective areas of expertise. That gave me a great deal of insight into how I could best adapt their work into a more visual format, as well as tailor my own to suit an audience that are new to comics journalism.