Silicon Valley Is Not a Place, But a State of Mind 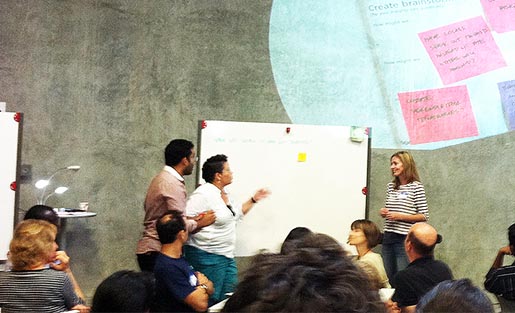 When I arrived as a Knight Fellow at Stanford, I asked the staff, “Where is Silicon Valley?” I was expecting that it would be a building like the Stanford Shopping Center, with every tech company inside.

“Silicon Valley is more like a concept, driven by the spirit and curiosity to build new things,” I was told. From that moment, I really wanted to understand what that meant. Now, I was looking for two different things — to explore and experience these ideas.

"The values that we demonstrated as a group (spirit, curiosity, collaboration and finding solutions for real-world problems) told me that finally I had found Silicon Valley. These are the ideas and culture that have turned many students at Stanford into entrepreneurs, inventors and collaborators."

But the picture was still incomplete until I had the good fortune to attend a Boot Camp at the Hasso Plattner Institute of Design, commonly known as the d.school.

As a group, our challenge was to help a new female student at Stanford whose parents wanted her to be as religious as she had been at home. They also wanted her to talk to them every day. As a student, that would be difficult for her. At first, we thought about the many existing social media websites that she could use to communicate — but that wouldn’t suit the parents who also wanted to have a complete record of her activities at the end of the year.

We brainstormed by empathizing with both her and her parents, defining the problem, ideating, prototyping, and finally testing a solution. We came up with the concept of a new app that would help her share every activity of the day with her parents through photographs. The parents would also send their picture stories back to her.

The pictures she took would be automatically added to a calendar and at the end of the year, the app would create a single story of her year, like a family picture book, telling every moment of her time as a student.

The values that we demonstrated as a group (spirit, curiosity, collaboration and finding solutions for real-world problems) told me that finally I had found Silicon Valley. These are the ideas and culture that have turned many students at Stanford into entrepreneurs, inventors and collaborators.

No place for new ideas

Unfortunately these values don’t exist in many universities in the developing world. My country, Pakistan, is no exception; I graduated in Journalism from the University of Peshawar in northwestern Pakistan. Some obvious reasons could be that universities don’t encourage students to be innovative, or that students do not have the passion for new ideas.

And that could be because there is no space for immature ideas to breathe. Many students have ideas, but kill them when they think of the resources they will need to make them real. Others are scared by the amount of innovation that already exists elsewhere, so they think there is nothing left for them to create. And in Pakistan, everyone is competing against each other, which makes it difficult for them to collaborate and increase productivity.

But here at Stanford, students pursue their ideas regardless of the resources and the competitive marketplace by choosing to innovate and collaborate, and that is the beauty of Silicon Valley.

Tayyeb Afridi grew up in Pakistan’s tribal areas. After studying journalism at the University of Peshawar, he worked as a reporter on local radio and print media. In 2006, he became a producer for Radio Khyber, which broadcasts in the region of the Khyber Pass. Here he began the first-ever radio bulletins of local news, which ran for two years despite the dangers posed by militancy in the region. Two years ago, he joined Internews Network, an international media development agency, to help organize training courses for local radio stations. Led by his passion to empower citizens in northwestern Pakistan, he is now establishing a news agency to broadcast balanced local news coverage for the tribal areas and Khyber Pukhtunkhwa on radio, online and mobile platforms.