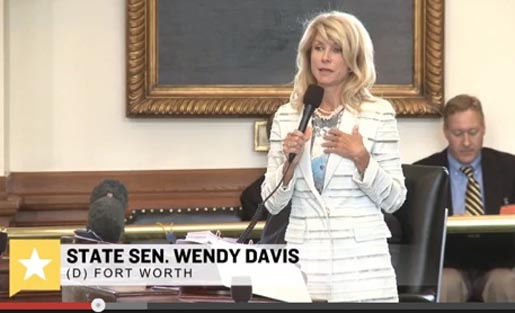 An image from the livestream of Sen. Wendy Davis' filibuster appears on the Texas Tribune's Kickstarter page. Credit: Screenshot/Texas Tribune/Kickstarter

Editor’s note: This is the next installment of “Brass Tacks,” an occasional series on NewsBiz focusing on pragmatic advice for selected best practices in the business of digital news.

“It’s not like you’re just casting it in stone and praying. You can adapt, based on what you’re seeing in the campaign.” -Rodney Gibbs

The Texas Tribune, already boosting revenue through live events and corporate sponsorships, just notched another fundraising milestone: a successful Kickstarter campaign. It took a little more than three weeks for the Tribune to surpass its goal of $60,000 (plus a $10,000 matching pledge from the Knight Foundation) for equipment that will enable the Tribune to stream live video coverage of the 2014 Texas governor’s race.

The Tribune’s Kickstarter campaign ended Oct. 22 after tallying $65,310, plus the additional $10,000 pledge from Knight and another $10,500 in checks. Nearly 20 percent of the amount pledged through Kickstarter came from Twitter referrals, compared to just less than 9 percent from Facebook. So, at least for this Kickstarter campaign, Twitter was twice as effective as Facebook.

In recent months, news organizations have used Kickstarter to fund journalism projects ranging from the Center for Investigative Reporting’s FOIA Machine to ProPublica’s Investigating the Intern Economy to the more globally minded Worldcrunch Impact. (Garrett Goodman of Paris-based Worldcrunch reflected about his three takeaways from the crowdfunding experience.)

Pre-launch prep is vital. Gibbs brainstormed with colleagues about what type of project to pitch. He reached out to friends (both journalists and non-journalists) who had found success with Kickstarter. He studied and heeded Kickstarter’s own advice, including the importance of creating a video and making sure the proposed project has a finite end. And even with all that preparation, Kickstarter still sent back the initial project proposal, asking for more specifics.

Craft a clear, succinct call to action. In the Tribune’s case, the appeal basically boiled down to eight words: Help us livestream the 2014 Texas governor’s race. “It’s kind of that proverbial elevator pitch,” Gibbs said. When making your fuller case, though, craft pitches catered to specific audiences, whether that means complete newcomers, fellow employees or die-hard supporters. For example, Gibbs’ blog post announcing the Kickstarter campaign safely assumed that most Tribune readers were familiar with the Wendy Davis filibuster coverage that inspired the livestreaming project, whereas the Tribune’s complete pitch on Kickstarter had more background information.

Rally co-workers and make it easy for them to share. “A lot of people here want to help,” Gibbs said. “They’re just busy with their beat or their department.” So Gibbs made it easier for his colleagues to participate by sending out emails containing pre-written text for tweets and Facebook posts, as well as images to promote the campaign. “That helped people leverage their own communities,” he said. It also created internal momentum that pushed the Tribune through the mid-campaign “trough,” when interest typically wanes. (And it built a sense of office camaraderie that led to some hilarious but spooky rejected Kickstarter promos.)

Aggressively spread the word — online and in person. The Tribune launched the Kickstarter campaign on the opening day of its annual public policy festival, where staffers talked it up in person. Two weeks later, an email blast to the Tribune’s membership list drew more than 300 clicks to the project’s Kickstarter page. And throughout the campaign, Tribune reporters and editors sent out constant reminders on Facebook and Twitter, creating enough buzz to draw tweets of support from the likes of national political bloggers Chris Cillizza and Ana Marie Cox.

Adjust as you go along. “It’s not like you’re just casting it in stone and praying,” Gibbs said. “You can adapt, based on what you’re seeing in the campaign.” For example, as a post-launch incentive aimed to help reach the Knight Foundation’s challenge of 1,000 individual backers, the Tribune offered a button as a reward for anyone who contributed at least a dollar. Also, based on requests in response to the campaign, the Tribune committed to host a three-part webinar series to teach participants how to livestream.

This story originally appeared on NewsBiz.