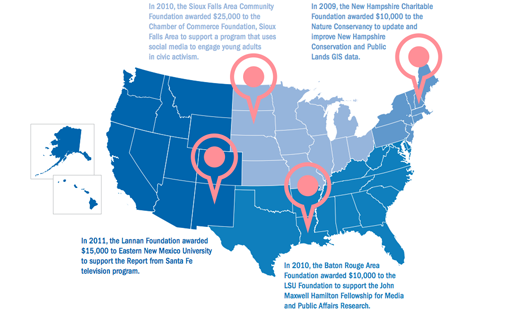 Organizations in the Western region of the U.S. received the largest amount of grant dollars, although the South was close behind.

Along with the changing media landscape, foundations are increasingly supporting media-related efforts in multiple disciplines — with a bigger push into digital platforms.

According to a new report by the Foundation Center, with support from the John S. and James L. Knight Foundation and the Wyncote Foundation, $1.86 billion was awarded in media-related grants from 2009 to 2011.

In fact, media funding increased 21 percent from 2009 to 2011. In these years, Newseum and the University of Southern California were the top two recipients, receiving a total of $239.5 million between the two. Additionally, the increase in foundation support for new media — such as web-based and mobile media — was four times greater than the growth in support for traditional media — such as print, television and radio.

In a post on the Knight Blog, Steven Waldman raised questions about how the foundations are approaching the media space. He says that growth is good while also pointing out that old media players still dominate. Indeed, none of the top 10 recipients of traditional foundations were digital-native startups. Waldman also claims that foundations are now approaching the changing landscape of media, realizing that the whole needs to be bigger, not re-segmented into smaller parts.

An interactive visualization tool with charts and additional data is available at mediaimpactfunder.org.

From this, one major takeaway is the encouragement from foundations via grantmaking for new media formats. Not only are foundations realizing the importance of media, but investments in media are increasingly becoming a bigger part of the whole.