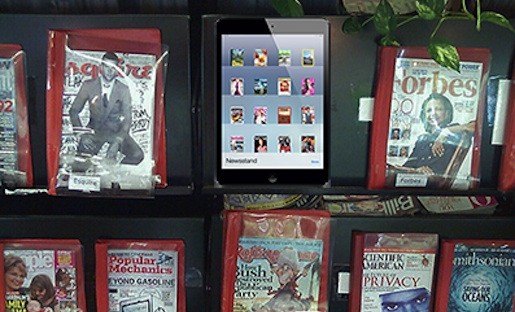 Remix of photo by Ben Ostrowsky.

Magazine publishers are experimenting with all sorts of different ways to get you to pay for their digital products, including single issues, subscriptions, “buffets” (like Next Issue) and package deals (like Zinio’s Z-Pass). But if you have a library card, you may be able to get quite a few digital magazines without paying anything at all.

Public libraries in cities large and small already offer their patrons digital magazines free of charge. The most common source is actually digital newsstand Zinio, which offers libraries subscriptions through the library services company Recorded Books. Digital magazines are broadening libraries’ collections and deepening patrons’ interaction with library resources, helping them read media in the format they prefer, whenever and wherever.

“The budgets in most libraries are staying steady or going down, and the allocation of what’s going to digital services is going up.” -Brad Gray

The Zinio service offered by Recorded Books launched in October 2012 and now offers subscribing libraries a selection of 850 magazines from the U.S., U.K., Canada and Mexico, says Brad Gray, manager of business development at Recorded Books.

“We take the consumer business and turn it into a library experience,” says Gray.

Gray says that there are now nearly 1,000 library contracts for the service. Each contract represents one library system and could cover a multi-branch urban library or a small rural library. Recorded Books’ management provides security and privacy, while also tracking usage for libraries.

Libraries choose which magazines they want to offer to their patrons, often choosing titles already popular in print collections or those available only digitally, such as Newsweek. Annual subscription fees are determined by the number of items each library normally circulates each year.

The user interface requires a library card number or other authentication to allow patrons to access the Zinio magazines. After the login, the interface is essentially just like that seen by any other Zinio user, whether on the Zinio website or in its mobile apps. Readers select magazines from the library’s offerings and can download them permanently to their accounts and devices, even for offline reading.

A look at the interface for library users of Zinio, from a screenshot of a Recorded Books instructional video.

The most popular magazines in the Zinio library service are news magazines, followed by entertainment, travel, food, women’s and health magazines, Gray says. Among the top titles are Newsweek, Cosmopolitan, Us Weekly, and The Economist, as well as National Geographic, which offers an enhanced, interactive edition through Zinio.

“The budgets in most libraries are staying steady or going down, and the allocation of what’s going to digital services is going up,” Gray says. “We hear that they are ultimately there to serve the public. Many have reduced their hours. This [service] allows them to extend the library’s hours. We find that the highest use of Zinio is in the late afternoon and into the evening, so this allows them to extend those days and their service opportunities.”

Two libraries that have adopted the Zinio/Recorded Books service — the Los Angeles Public Library and the Skokie (Ill.) Public Library — are generally pleased with it so far, though they’ve encountered some challenges and found that not all patrons are ready to go digital.

Peggy Murphy, the collection services manager for the Los Angeles Public Library, says that patrons’ response has been impressive in the three months the service has been offered. Within the first two months, patrons accessed over 22,000 magazine issues. The library has just purchased access to 75 more titles for a total of 305. Some patrons have even become “power readers,” Murphy reports, retrieving 10 magazines at a time from the service.

“We hear nothing but good things from patrons. They love these magazines,” Murphy says. “One patron says that when she can’t sleep at night, she just reads magazine after magazine. It’s a nice, easy way to get a really high-quality magazine experience without actually having the print magazine.”

Toby Greenwalt, virtual services coordinator for the Skokie libraries, says that library surveys show that patrons’ smartphone and tablet use has risen dramatically. The library started offering digital magazines back in summer 2011; Greenwalt says they are “pretty aggressive” about trying new technologies.

Today, around 250 to 300 issues are “checked out” every month by the Skokie library’s roughly 41,000 cardholders. The Zinio subscription costs the library system about $5,000 per year.

“The response [to the Zinio service] hasn’t been quite as big as we wanted it to be, but the people who do adopt it are die hard about it,” Greenwalt says. “There is a little bit of a learning curve to it. You have to work through an interface, and … we have to hold people’s hands to get them to the point where they can request their own magazines. But people stick around.”

Photo by Piscataway (N.J.) Public Library via their Tumblr.

Getting the word out about the digital magazines has been a challenge in both Los Angeles and Skokie. Both libraries advertise the service on their websites and through fliers, bookmarks, and face-to-face conversations with patrons. Greenwalt and Gray both described another successful strategy: marking the print magazines in the library that are also available digitally. “Then people realize they can access it at home, through our online catalog,” Greenwalt says.

Both the Los Angeles Public Library and Skokie’s libraries will keep offering print magazines for the foreseeable future, despite the good response to the digital options.

“When a patron is in a branch, it’s often a retired person or a mother with children. They want to have a magazine on hand they can pick up and read. They don’t want to book a computer, and they don’t have a tablet or iPad with them,” Murphy says. “The library’s magazines and newspapers are still very well used. Just because something new comes out and supersedes the other formats doesn’t mean they’re going away.”

And, of course, not everyone has a mobile device or is even interested in digital formats.

“This will always be a supplement to our print collection,” Greenwalt says. “Our audiences are very diverse. We have people who are only interface with us online and people who will refuse to touch a computer. We’re trying to meet the needs of a variety of people and interests.”

Geo-Locating for Magazines at the Library

Another digital magazine service is just starting to experiment with a library service. Foli (previously covered at MediaShift) is currently an iPad-only magazine app that detects a user’s GPS location and serves up digital magazines that have been purchased by the business — or library — at that location.

Henry He, co-founder and CEO of Foli, says that the company hasn’t yet focused on libraries as a business opportunity, but one library — in Escondido, Calif. — has signed up for a trial of the service.

“We know eventually libraries will be a good market for us. We were surprised by so many inbound requests [for product information],” He says. “Libraries worry about becoming irrelevant and about people not going to the library. Foli attracts people to go the library.”

Escondido Public Library advertises its Foli service on its website.

So far, patrons’ response to Foli has lagged, says Viktor Sjöberg, digital services librarian for the Escondido Public Library. Part of the problem may be the iPad-only nature of Foli, which is working on an Android version of its app.

“Just from working at the reference desk and coming into contact with the patrons, I see a lot more Android tablets and cheaper tablets that are used here,” says Sjöberg.

The idea of using technology to draw patrons to the library appeals to Sjöberg, though he isn’t sure most of his library’s patrons will use their tablets for magazines when they arrive.

“It’s an interesting way of merging the physical with the virtual. But apart from that kind of philosophical argument, for people who come to the library with an iPad, that’s not the first thing they think to do,” Sjöberg says.