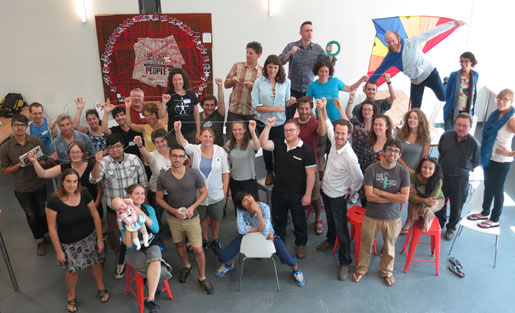 Attendees of the Public Lab 2013 Barnraising pose for a group photo. Photo by Shannon Dosemagen.

This post was co-authored by Public Lab’s Jessi Breen and Liz Barry.

This year’s Public Lab Barnraising brought 50 people together in Louisiana for our annual, retreat-style community gathering. This is the closest thing we have to a Public Lab conference — but with an emphasis on “doing stuff together” rather than just presenting/talking. In the spirit of bringing a community together to collectively raise a structure such as a barn, Public Lab comes together in-person to develop tools, toolkits, supporting materials such as guides and tutorials, test the tools, and develop new research directions and projects. Participants represent a wide range of interests, from technologists and designers to social scientists and community organizers. As we prepared for the 2013 barnraising, we all crossed our fingers that we’d be storm free between the East and Gulf Coasts, unlike last year when Hurricane Sandy disrupted many travelers. However, we weren’t so lucky!

"In an open space technology experience, people work towards solving a problem or answering a question in the context of complexity and diversity."

On October 3, with community members already in the air en route to New Orleans, we received news from LUMCON (the research center on the Gulf Coast where we would be lodging, meeting, and conducting research) that they were facing a potential 2-3 foot storm surge from Tropical Storm Karen and would be shutting their entire facility down and canceling our conference. Panic ensued, but only briefly. With some quick work and kind hearts, within a couple of hours gracious hospitality was offered to us by University of New Orleans TRAC and Propeller co-working space who agreed to house and host barnraisers joining us from as far away as Jerusalem and London.

And so we convened. Following time-tested principles of Open Space Technology, the group gathered to explore this year’s theme of education. We proposed sessions that would enable us to arrive at the end of our time together with a workable plan for supporting education initiatives in the coming year. Some plenaries were agreed upon in advance — for instance, we reserved an entire morning to discuss our diverse community’s ethics of practice and to collaboratively write our value statement where we each contributed statements in the form of, “as a member of the Public Lab community I value …”

Much progress was made by a dedicated group of teachers working to connect Public lab activities with U.S. federal standards for kindergarten-12th grade core curriculum. The diversity of sessions was representative of the diversity of individuals attending the barnraising — practitioners, NGO workers, journalists, activists, academics, designers, teachers.

Throughout the three-day conference, the rhythm pulsed between plenary sessions attended by all to small group breakouts for getting work done, which kept the group fresh and productive. The “Rule of Two Feet” governed; as stated by Harrison Owen, “If at any time during our time together you find yourself in any situation where you are neither learning nor contributing, use your two feet, go someplace else.” The spirit of “Be Prepared to Be Surprised” infused our encounters with open mindedness. Each session had a note taker using the “Talk” page (etherpad) of the relevant Public Lab wiki page. All notes and photo/video documentation were gathered here.

We wrapped up our third and final day together by listing out the outcomes of all sessions and the commitments made by individuals and Working Groups. There is now a Writing Group, a Water Quality Group, and a revamped Education group specifically working towards adapting Public Lab tools to integrate with the U.S. science education standards and generate “hello world” type experiments for use in the classroom. New community members joined the Public Lab organizers, a group of nominated community leaders who meet weekly and guide the way our community collaborates and grows.

It is worth noting that contemporary unconferences in the tech world employ some but not all of the principles of open space technology. In an open space technology experience, people work towards solving a problem or answering a question in the context of complexity and diversity. This stands in contrast to standard tech world “birds of a feather” meetings, which emphasize homogeneity and breakout sessions featuring uni-directional presentations. In open space technology, everyone tackles issues that are part of the same overarching issue. Open space technology emphasizes not only setting the agenda, but within each session, collaborating on the shared goals that were established at outset. It’s about getting work done together.

We are already planning for next year’s barnraising. We are committed to gathering in the Gulf Coast, and have accepted the fact that once again we will likely have to call it a hurricane party!

The 2013 Barnraising was sponsored with generous support from Rackspace and the John S. and James L. Knight Foundation.

A co-founder of Public Laboratory for Open Technology and Science, Shannon is based in New Orleans as the Director of Community Engagement, Education and Outreach. Shannon has worked with Public Laboratory (formerly Grassroots Mapping) for the last year as the Gulf Coast project lead, organizing volunteers as they collected aerial images of the Gulf Coast. Shannon also works with the Anthropology and Geography Department at Louisiana State University as an Ethnographer and Community Researcher on a study about the social impacts of the spill in coastal Louisiana communities. Prior to working with Public Laboratory, she was the Oil Spill Response Coordinator at the Louisiana Bucket Brigade, directing projects such as the first on-the-ground health and economic impact report in Louisiana post-oil spill. Shannon has an MS in Anthropology, a BFA in Photography and Anthropology and has worked with nonprofits for over 10 years.