Mediatwits #97: Investigative Reporting and the Government Shutdown in the Age of Social Media 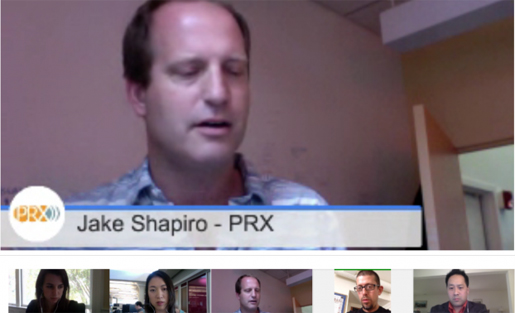 Investigative reporting is expensive, time-consuming and arduous — much more so than rapid-fire articles that follow the daily breaking news mill. But if the journalism industry is already struggling to pay its bills, what is the future of in-depth, watchdog reporting? One program, Reveal, which debuted Sept. 28, offers a venue for investigative journalism in the form of public radio. The program is the brainchild of the Center for Investigative Reporting and Public Radio Exchange. For this episode of Mediatwits, we’re joined by guests Joaquin Alvarado of the CIR, Jake Shapiro of PRX. We’ll also discuss this week’s drama in the Beltway as Congressional brinksmanship screeched the government to a halt with Elise Hu of National Public Radio, and how this has been covered in the age of social media.

American University’s Andrew Lih will host while Mark Glaser is on paternity leave.

Before joining The Center for Investigative Reporting, Joaquin Alvarado served as senior vice president for digital innovation at American Public Media and founding senior vice president for diversity and innovation at the Corporation for Public Broadcasting. He is the founder of CoCo Studios, which promotes media collaboration and game development for fiber and mobile networks. Joaquin was the founding director of the Institute for Next Generation Internet, which launched in 2005 from San Francisco State University. In 2004, Joaquin began the National Public Lightpath, advocating high-speed, fiber-optic network as the next generation of the Internet. He serves on the boards of TechSoup Global and DEI – the public broadcasting development association. He is the co-author of “Contemporary Chicana and Chicano Art.” He lives with his wife and two children in Oakland.

Jake Shapiro is founding CEO of PRX — an award-winning nonprofit whose mission is to harness technology to bring significant stories to millions of people. Since its launch in 2003 PRX has been a leader and innovator in public media: pioneering distribution models, developing signature shows, and creating cutting-edge mobile apps. In 2012 Jake helped found Matter Ventures – a for-profit startup accelerator for mission-driven media entrepreneurs. Jake is an Ashoka Fellow, Senior Researcher at the Berkman Center at Harvard, and advisor to a number of public media organizations, media funders, and Internet startups. He also plays a mean guitar.

Elise Hu covers technology and culture for NPR’s on-air and online platforms. She joined NPR in 2011 to head up the digital launch of StateImpact, a DuPont award-winning public policy reporting network. Previously, she was a founding journalist at the non-profit digital news startup, The Texas Tribune. While working as a political reporter, she also oversaw the Tribune’s social and multimedia journalism, statewide television partnerships and toyed around with new story forms. Elise’s work has earned a Gannett Foundation Award for Innovation in Watchdog Journalism, a National Edward R. Murrow award for best online video andThe Austin Chronicle once dubiously named her the “Best TV Reporter Who Can Write.”  Outside of work, she’s an adviser to the John S. and James L. Knight Foundation and serves as a regular panelist for the Knight News Challenge.

Reveal promises to not only break in-depth national stories, but to follow up on the reporting’s effects and take listeners behind the scenes of the process. In its pilot episode, host Al Letson interviewed the attorney overseeing Edward Snowden’s defense, covered a CIR report about corrupt charities and broke a story about the Department of Veterans Affairs over-prescribing opiates to veterans. As a collaboration between a non-profit and public radio, Reveal presents an interesting model. Is the public sector the future niche for investigative reporting? Does this mean that in-depth reporting is becoming further differentiated from mainstream, traditional outlets?

Tuesday saw the Congressional fight over the implementation of the Affordable Care Act, otherwise known as Obamacare, trigger the shutdown of the US federal government. There are multiple reasons for the American public to be upset, but how well have media outlets covered this complex set of issues, from the influence of far-right Tea Party politicians to force Republican leadership to this point, or the implementation details of the ACA, or trying to sift through who is at fault? As the first government shutdown in the age of social media, YouTube and Reddit, how does these platforms change how politicians and traditional media outlets can direct the narrative?