Can 114 Videos Tell One Story About Forced Evictions in Rio de Janeiro? 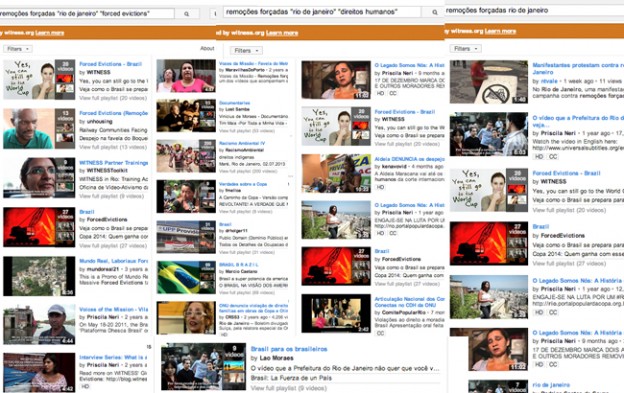 Over the course of 18 months partners identified 114 videos to curate to tell the story of the evictions in Rio.

In January 2012, some partners and I sat around a table in Rio de Janeiro to discuss how to make the stories we were hearing about forced evictions in the city more visible.  We were up against several challenges, and one of the biggest was confronting the local government’s repeated denials that the issue even existed, as well as getting the media to ask harder questions.

Mayor Eduardo Paes loved saying that “there were no forced evictions in Rio” and all of those having to move from their homes to make way for the 2014 World Cup and 2016 Olympics-related construction were “being fairly compensated and adequately resettled.”

"We also knew there were several videos circulating online with powerful testimonies ... because they lived scattered and unconnected across the web, they weren’t telling a larger story, and they weren’t having the full impact they were capable of."

But from visiting communities throughout the city, we knew this was just not true.

The power of video

We also knew there were several videos circulating online with powerful testimonies from those affected by evictions and harrowing images of communities being razed to the ground.  These were videos shot by community members, alternative news collectives, NGOs, social movements, and mainstream media outlets.  But because they lived scattered and unconnected across the web, they weren’t telling a larger story, and they weren’t having the full impact they were capable of.

So we asked ourselves: How could we use these videos to paint that larger picture, to connect the dots between those stories and prove that forced evictions were indeed happening and needed to stop?

We decided to start collecting all the videos we could find on forced evictions in Rio and embark on a curation project — a mission to identify, verify, catalog, contextualize, and systemize the isolated dots on the YouTube map in order to draw the constellation and shed light on the overarching story that was unfolding throughout the city.

How we did it

A screen shot from the curated video project’s website

Over the course of 18 months, we identified 114 videos, from raw cell phone clips shot in the heat of the moment to edited pieces.  We then cataloged them using a Google form to ensure the uniformity of the data, and we organized the material according to several different sub-categories, including:

We then set out to verify the information in the videos.  We did this by using the journalistic standard of triple-sourcing information to ensure accuracy, seeking three independent sources to corroborate and confirm the reports from each community.

The next step was to link the violations in the videos to the specific laws they were breaking at the local, state and federal levels as well as in international human rights treaties ratified by Brazil — we were lucky to have a fantastic team of volunteer lawyers who helped us do this.

Finally, it was time to look at the data to extract the overarching story.

Here’s an excerpt from one of the testimonies we watched. This came from Edilson, a resident evicted from the Restinga community in Voices of the Mission: Restinga:

At 10 a.m., they got here with all of the machinery, police, riot police with specialized weapons. They started kicking people out of the houses. If you didn’t agree to leave, they would take that bulldozer and tear down the resident’s door, and then the officers would come in and take you out by force to demolish the home.

The data told a compelling story: In communities undergoing forced evictions, 53 percent of videos reported the lack of prior warning before demolitions and 44 percent reported intimidation, threats, and violence during the evictions.

For more on the findings, check in with the WITNESS Blog for Part 2 of this series.

Priscila Néri, a Brazilian journalist and human rights defender, works at WITNESS.org on its global campaign to end forced evictions.