The Promises and Pitfalls of Pitching News Startup Ideas 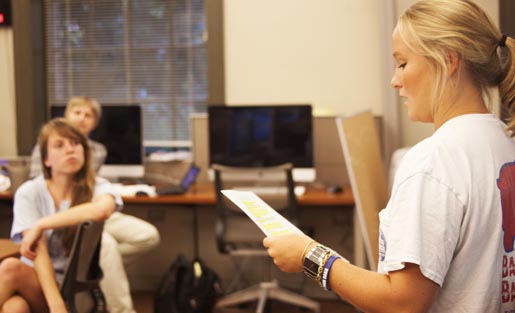 The evening of August 26 was loud in the Reese News Lab: 16 students pitched their product ideas to the Lab to explore throughout the semester. Only four of the projects were selected. Would my idea survive the vetting process?

"Could I meaningfully go through some 33 slides in 2 minutes? What could be easier than that? Well, lots of things."

I’d chosen the idea of location-tailored news, with a probable monetization model of selling traffic information to bigger providers (Google Maps, Microsoft’s Bing, etc). However, after initial research it became clear that the market is heavily saturated, and with the recent acquisition of Waze (social traffic updates service), Google probably wouldn’t be interested in this idea at all.

So I decided to suggest a ready-to-go mobile platform that could be used by small and medium news organizations.

The tentative name I came up with was “ReadyToGo.”

I spent a couple of hours on researching (primarily through Google and relevant journalism websites like Poynter) and figured out that there were no easily findable platforms like that on the market. There were a couple of similar products that connected citizen journalists with the professional media and allowed the media to assign tasks and buy pictures. But Meporter was last updated in early 2012, and Rawporter was more alive but still didn’t look like it had a lot of success to share with the users.

After that preliminary research, I refined the idea and the pitch. The main advantage of this product would be that it wouldn’t be competing with the news organizations for users, but providing the small-to-medium news organizations with the means of easily rolling out the branded and customized mobile application and working directly with their local audiences.

To build my pitch, I followed the advice from Laura Ruel, the wonderful professor in the journalism school, and tried to make my pitch answer these questions: why there is a problem, what needs to be done, and how you are uniquely suited to solve it with your product.

I soon ran into the problem that Professor Ruel highlighted as standard for the most pitches: TMI, which stands for “too much information.” I had way too much to say and not enough time to say it. But it was too late to change strategies, so I polished it up as much as I could.

Could I meaningfully go through some 33 slides in 2 minutes? What could be easier than that? Well, lots of things.

But the Lab staffers gave me some applause, and they looked like they’ve enjoyed at least the cute and horrifying pictures I put inside.

What could’ve been done better?

I wish I didn’t have to change the initial idea and had time to develop my second idea to be better, more focused, and with more distinctive features.

The presentation should’ve been trimmed to, say, 10 slides.

The topic itself could’ve been better.

In the end, my pitch wasn’t selected to move forward to the final four. But given the time restraints and the experimental focus in general, I still think it was at least a fair pitch — and a great deal of learning for me. The next one will be better, I’m sure.

Nick Shchetko is a technology reporter and editor based in North Carolina. He’s been working in the technology journalism field for more than a decade, with a focus on his home region of Belarus, Russia, and Eastern Europe. He also covered a number of international IT events and the business of global tech companies. Nick holds a bachelors in radio engineering from the Belarusian State University of Informatics and Radio Electronics and is pursuing a masters in Mass Communication (Business and Media) from the University of North Carolina at Chapel Hill.