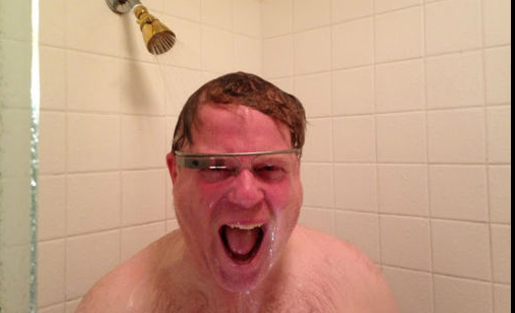 It's not the shower scene from "Psycho," but the image of social media maven Robert Scoble in his shower wearing Google Glass, has become infamous in its own way. Scoble will join the Mediatwits to talk about his obsession with Glass.

Google Glass could have a transformative effect on journalism, especially as we watch Tim Pool from VICE use Google Glass to report on Turkish protests. But it’s important to examine the shortfalls as well as all the great new advancements, both real and prophesied. Special guests Rackspace’s Robert Scoble, Veterans United’s Sarah Hill, CUNY’s Jeff Jarvis and USC Annenberg’s Robert Hernandez, all early adopters of Google Glass as well as social media and journalism experts, will talk about their experiences with the device and what they see as its strengths and weaknesses for its potential future in journalism. MediaShift’s Mark Glaser hosts, along with Ana Marie Cox from the Guardian and Andrew Lih from American University.

Note: The Mediatwits will be on summer vacation next week, and will return on August 16.

With more people trying out Google Glass, the possibilities have captured every tech-lover’s imagination.

Sarah Hill is a 12-time Emmy award-winning reporter for the Veterans United Network, the broadcast channel for Veterans United. She also freelances at KOMU-TV. Hill was the first journalist to use a Google Plus Hangout on TV and continues to mentor broadcasters and businesses on how to use Google + Hangouts and Human Media to connect with customers face to face. She’s also a Glass Explorer and is using the new technology to bring veterans closer to their memorials. Hill has also covered the aftermath of the 2004 Tsunami in Sri Lanka and Indonesia as well as Hurricane Katrina. In addition, she’s produced documentaries in Vietnam and Guatemala about the world’s mobility problem. Subscribe to her blog about Hangouts On Air and learn about the Human Media Movement.

Jeff Jarvis is the author of Public Parts: How Sharing in the Digital Age Improves the Way We Work and Live and What Would Google Do? and blogs about media and news at Buzzmachine.com. He is associate professor and director of the Tow-Knight Center for Entrepreneurial Journalism at the City University of New York’s Graduate School of Journalism. He is consulting editor and a partner at Daylife, a news startup. He consults for media companies and is a public speaker. Until 2005, he was president and creative director of Advance.net, the online arm of Advance Publications. Prior to that, Jarvis was creator and founding editor of Entertainment Weekly; Sunday editor and associate publisher of the New York Daily News; TV critic for TV Guide and People; a columnist on the San Francisco Examiner; assistant city editor and reporter for the Chicago Tribune; reporter for Chicago Today.

Robert Scoble is Rackspace’s startup liaison officer, helping small teams have a huge impact with cloud computing technology. Scoble travels the world looking for what’s happening on the bleeding edge of technology for Rackspace’s startup program. He’s interviewed thousands of executives and technology innovators and reports what he learns in books (“The Age of Context,” a book coauthored with Forbes author Shel Israel, will come out in Q4 of 2013), YouTube, and many social media sites where he’s followed by millions of people. In 2000 he started his technology blog. In 2003-2006 he worked at Microsoft as an evangelist and one of the five guys who started Microsoft’s famous Channel9 video community.

Robert Hernandez, also known as WebJournalist, has made a name for himself as a journalist of the Web, not just on the Web. His primary focus is exploring and developing the intersection of technology and journalism – to empower people, inform reporting and storytelling, engage community, improve distribution and, whenever possible, enhance revenue. He is an assistant professor of professional practice at USC Annenberg School for Communication and Journalism, but he’s not an academic… he’s more of a “hackademic” and specializes in “MacGyvering” Web journalism solutions. He has worked for seattletimes.com, SFGate.com, eXaminer.com, La Prensa Gráfica, among others. Hernandez is also the co-founder of #wjchat and creator of Learn Code for Journalism with Me project. He is currently serving on the Online News Association board and a lifetime member of the National Association of Hispanic Journalists.

With more people trying out Google Glass, the possibilities have captured every tech-lover’s imagination. There’s potential for rock stars, marketers, authors, family, national and local news alerts, basically everyone, and the possibilities seem limitless. Google Glass could have a disruptive effect on broadcast journalism. As the saying goes, “The best camera you have is the one on you.” With the potential to take pictures with a simple phrase, there are exciting possibilities for journalists and citizens to capture breaking news, such as through a Google Hangout, during protests in Istanbul, or even on Capitol Hill. But sound and stability are still a concern, leaving professional-quality video out of the picture, and the lack of apps available limits its functionality.

Will Google Glass replace any modes of journalism we’re used to seeing now, or will it only add to the current state of journalism? Will it ever completely replace some of the tools we use today? What are the downsides to public discourse and communication?

Bradley Manning not guilty on aiding the enemy, but guilty on other counts (WSJ)

Facebook to sell TV-style ads for $2.5 million each (Bloomberg)