The Future of LocalWiki: Collecting, Sharing and Opening the World’s Local Knowledge 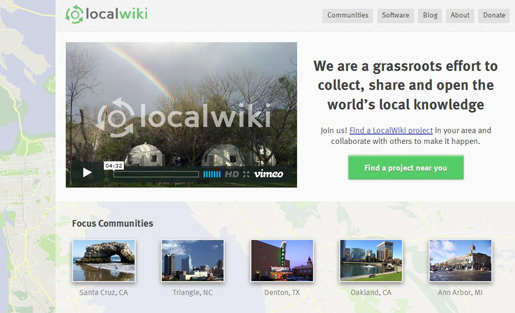 LocalWiki is planning to develop a singular LocalWiki "hub" that will provide people with a global, universal platform for local knowledge.

Where we are right now

When we started the LocalWiki project a little more than two years ago, we set out to bring the wonder, joy, and transformative power of projects like the DavisWiki to as many communities as possible. We wanted to show the world that a more open, more empowering and collaborative model for local media was possible.

"When we began the LocalWiki project, the question we got asked over and over was: 'But can you replicate this? Davis is...weird.'"

We worked hard to create an entirely new type of “wiki” software designed specifically for local community collaboration. Our goal was to make the ultimate platform for local community knowledge sharing. In the process, we broke a lot of ground — we created the first open-source, entirely visual page editing process; a beautiful collaborative mapping system; the first open-source, visual “what’s changed” view for pages and maps; a powerful geographic API; and much more.

When we began the LocalWiki project, we kept getting asked “But can you replicate this? Davis is… weird.”

We worked alongside a number of communities to help them build out successful projects and test our platform. Together, we’ve chronicled the greenways of Raleigh; helped map and describe Antarctica; told the story of the informal neighborhoods of Denton; covered over 300 topics in the history of Oakland; and much more.  We’ve seen city councils give praise to LocalWiki projects, and we’ve had countless community members come together, in person, to build out LocalWiki projects together.

Today, there are more than 70 major LocalWiki projects in 10 countries and in seven languages. Every month, around 400,000 people use a LocalWiki project. And the LocalWiki software platform has been installed over 1,000 times, making it one of the most-replicated pieces of open-source civic software ever.

But most importantly, we’ve begun a movement — a movement focused around communities coming together to collaboratively write their past, make meaning of their present, and build visions of their future.

Here’s a video of me discussing the state of LocalWiki in 2013 with highlights from different LocalWiki projects around the world:

Despite the tremendous progress we’ve made, there’s still so far to go. Over the past several months we’ve taken time to reflect on where we’ve come and where we want to go, and thought hard about some of the biggest problems facing our current approach:

Fundamentally, what we want to do is collect, share and open the world’s local knowledge. We’ve proven our model can be replicated successfully in several major communities, but our challenge now is to find ways to massively scale the project up with the aim of reaching millions of people throughout the world.

We’re extremely happy to announce that, with the generous support of the John S. and James L. Knight Foundation, we’re embarking on a new project that aims to address these problems head-on, scale up LocalWiki and ultimately make it easier for anyone, anywhere to learn about where they live.

At the core of this new project will be the development of a singular LocalWiki “hub.” This hub will provide a frictionless way to learn and share without technical or logistical challenges; serve as a repository for both structured and unstructured local information; and ultimately provide a global, universal platform for local knowledge.

Imagine just going to localwiki.org, searching “volunteer,” and finding all of the volunteer opportunities in your area. Or learning about the history of a nearby lake from a friend and being able to share it with your community instantly, without having to create a LocalWiki project first. Or finding a great dataset of park information for your entire state and being able to import it into LocalWiki, as a whole. This — and much more — is what we are going to experiment with over the coming year.

Here’s a little video of me discussing LocalWiki’s aims and future direction:

Many aspects of the project are still yet to be determined. LocalWiki is a community-driven project through and through, so to kick things off we will start holding hangouts with LocalWiki communities in the coming weeks to chart a course together. At first, we plan to start with something simple that helps people get started with LocalWiki projects and then iterate, iterate and iterate.

But we can’t do it without your help!

We couldn’t be more excited to share the power of LocalWiki with many, many more people all over the world.  It’s going to take a lot of work, but with your help we know we will succeed. Let’s do it!

If you’re a member of the press, please see our press release here.

Philip Neustrom is a software engineer in the San Francisco Bay area. He co-founded DavisWiki.org in 2004. For the past several years he has worked on a variety of nonprofit efforts to engage everyday citizens. He oversaw the development of the popular VideoTheVote.org, the world’s largest coordinated video documentation project, and was the lead developer at Citizen Engagement Laboratory, a nonprofit focused on empowering traditionally underrepresented constituencies. He is a graduate of the University of California, Davis, with a bachelor’s in Mathematics.