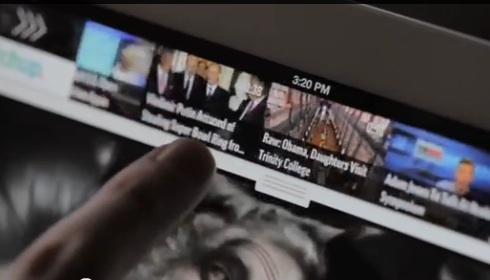 Watchup, an app that helps you keep up with news, just released a 2.0 version.

After several months of our hard work and lots of lasagna, Watchup 2.0 has finally hit the iPad App Store.

"We’re breaking down the barriers between video aggregators and newsreaders to become the first video-centric newsreader in the market."

Launching the 1.0 version of the app at the MIT Media Lab last year, and running it every day, has been an incredibly useful and educational experience. We created Watchup to bring the power of video journalism to emerging screens. We believe that an informed audience is one that can easily access the best content that’s available in the shortest amount of time.

The newly launched Watchup 2.0 offers frictionless watching for those times when you just want to lean back and relax. But the app now covers those moments when you want to further interact with the iPad by offering related articles to read while you’re watching a video. We’re breaking down the barriers between video aggregators and newsreaders to become the first video-centric newsreader in the market. Why only read when you can actually watch a video, too? It’s a second screen experience, all on your iPad.

Here are some of the changes in the new version.

You don’t open Watchup anymore. You turn it on, and your newscast plays continuously.
The first version of Watchup was all about letting you pick the videos you wanted to manually assemble your newscast. However, we realized that some people were intimidated by having to make choices or they simply didn’t have the time to do so. But the basic idea remains.
“It’s the newscast I’d design as viewer,” said Hari Sreenivasan, weekend anchor and director of digital partnerships for “PBS NewsHour.” “Why settle for one network or one broadcast, when with a few clicks, I can stack a program I’d love to watch including content from several sources?”

Now, if you still want to retain control over your newscast, and want to choose the videos you want to watch, you can browse à la carte, channel by channel, by dragging the upper panel down.
This is a functionality for our power users who like staying in control. Just touch a video to either queue it up or just play it immediately.

Need context? Drag our right handle in to read articles that are related to the video you’re watching.
The fact is that not all the videos require your full attention and not all the videos come with the necessary context. So why not peruse an article while watching a video?

Add up to 20 channels to your lineup

In the previous version of the app we intentionally limited the number of channels you could subscribe to. We have now raised the limit from 10 to 20 to let you watch more channels, but we are keeping a so that your interface doesn’t become too crowded.

Our à la carte browsing and “watch & read” functions are part of what we call “lasagna design.” This approach lets us augment your news experience with several layers of content and functionalities.

If you like keeping up with the news and want a rich multimedia experience, Watchup is the app for you. A big “thank you” to Knight Foundation which has wholeheartedly supported us in our journey, and thank you to all our users for your great feedback. Please send more feedback as we keep improving the experience!