Mediatwits #86: Social Media vs. CNN in Breaking News; Rise of The Guardian 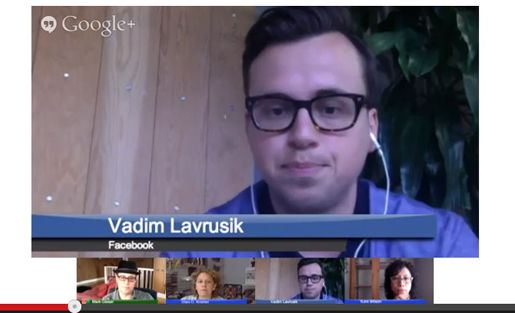 Facebook's Vadim Lavrusik joined this week's episode of the Mediatwits, talking about how breaking news spreads on social media, as well as the rise of U.K. newspaper the Guardian.

When news happens, where do you turn first? A recent Gallup poll says most people still turn to TV, but if you followed the recent airplane crash at SFO or the military coup in Egypt, you know the action was on social media. We’ll discuss the role that social media plays in breaking news, how journalists are using social media, and what they can do better with special guests Vadim Lavrusik of Facebook and Yumi Wilson of LinkedIn. Next, we’ll talk about the rise of The Guardian, a British newspaper that has pushed hard online into the U.S., and how its recent scoops with Edward Snowden over the NSA snooping have brought it head-to-head with NYTimes.com. MediaShift’s Mark Glaser hosts, along with former paidContent editor Staci Kramer.

Watch or listen to the podcast right here:

"[Facebook] wants to be the #1 driver of traffic to media organizations. That's one of our big goals." -Vadim Lavrusik
ADVERTISEMENT

Vadim Lavrusik is the journalism program manager at Facebook where he works on public content product and partnerships to improve social journalism on the platform. He is also an Adjunct Professor teaching social media at the Columbia University Graduate School of Journalism where he also graduated with an MS in Digital Media. Prior to Facebook, he worked  as the Community Manager and Social Media Strategist at Mashable.com. He has written for PBS NewsHour, Nieman Journalism Lab, Minneapolis/St. Paul Business Journal, the Star Tribune, Poynter.org, Mashable.com and more.

Yumi Wilson is the community manager for LinkedIn for journalists. She is part of a team dedicated to training journalists and other folks how to take full advantage of LinkedIn. She is also an associate professor of journalism at San Francisco State University. In a previous life, she was a news reporter for the Associated Press in Los Angeles and the San Francisco Chronicle. Follow her on Twitter @YumiWilson.

Following recent trends in breaking news, sources and journalists are using social media in a huge way to shape the story as it’s happening, including citizen journalism for video and photography. But social media is also a powerful tool for journalists to find sources, seek ethical and practical advice, spread their reach and more. Meanwhile CNN had been the go-to place for breaking news, but has stumbled recently. It made high profile mistakes during the Boston Bombings chase and had wall-to-wall trial coverage of the George Zimmerman trial during the Egyptian coup. NYU’s Jay Rosen says that CNN has made itself obsolete: Why focus on breaking news, CNN’s bread and butter of the past, when everybody has now taken that model and arguably made it better. Plus, Reuter’s Jack Shafer notes that what viewers won’t find on CNN they’ll find elsewhere.

Vadim: How has Facebook’s role changed during breaking news? Yumi: What tools should journalists use to help them get the most out of social media? Has CNN head Jeff Zucker taken the right move in favoring stories with less import and more interest? What does CNN’s current trajectory say about the news business as a whole?

2. Rise of The Guardian

The future looks bright for The Guardian, the UK newspaper that broke the stories based on leaks by Edward Snowden. From NSA data collection to phone hacking by News Corp., the third-biggest online news source in the world is starting to make waves. It also has a stable financial footing and a booming digital strategy. However, The New York Times and The Washington Post have underrated the organization as a “British news-site” and “underweight” and NSA leak stories author Glenn Greenwald as a “blogger.”

What is The Guardian doing right or wrong to succeed on a global level? What can other news outlets do to catch up or stay ahead?

Zach C. Cohen is an editorial intern for PBS MediaShift studying abroad at la Universidad Nacional in Heredia, Costa Rica. He is also a reporter for Latin Pulse, a weekly radio program on Latin American foreign affairs based at AU’s School of Communication. Get regular updates from @Zachary_Cohen on Twitter or on his blog.