Kickstopper: When the Crowd Funds Projects You Abhor 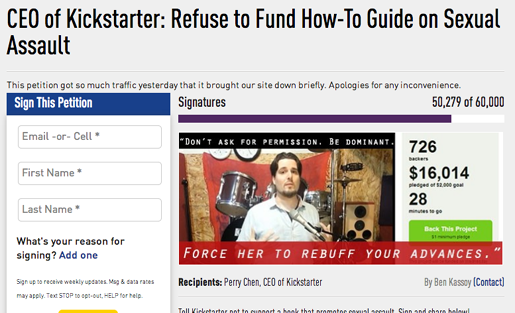 The DoSomething.org petition against Above the Game's crowdfunding campaign.

Like Facebook and other corporate social platforms, Kickstarter last week was pressured to refine its policies governing which speech it will and will not accept and support on its platform.

"How do we balance the exciting democratization of funding channels with standards to check our base impulses and ensure basic human decency?"

The catalyst for the conversation was a DoSomething.org petition with more than 50,068 signatures (in just over a day) against Ken Hoinsky‘s successfully completed Kickstarter crowdfunding campaign. Hoinsky’s initial $2,000 goal was surpassed, reaching $16,639 before the campaign ended.

(The reason people have taken issue with Hoinsky’s “Above the Game” book is that it advises men to be more physically aggressive and dominant in their pursuit of sex with women. There are many people who feel that men are already plenty physical and plenty dominant in heterosexual dating. Hoinsky responded here.)

Regardless of how you feel about pick-up artists and amateur authors who wish to spread that gospel, this campaign raises interesting questions for a wide range of social sites, and crowdfunding in general.

This isn’t actually the first campaign to attempt to prevent a Kickstarter project. Several campaigns have sought to shut down feminist Kickstarter projects that intersect with games, such as Tropes vs. Women in Video Games and 9 Year Old Builds Her First RPG (see video below). (Thanks to Philip Tan of MIT Game Lab for the tip on these campaigns.)

What are the Rules Governing Speech, and Who Interprets Them?

Speech on Kickstarter is regulated, legally and culturally, through a combination of U.S. speech laws (which will be applied if a suit is brought), and the site’s own community guidelines and everyday decisions. These guidelines, the company has signaled, are open to adaptation, but the campaigners have also pointed out that the existing rules prohibit content that is “threatening, abusive” or “offensive.” It also “reserves the right to suspend a campaign at any time and for any reason.” Clearly a concept like “offensive” is subject to multiple interpretations.

Yancey Strickler, a co-founder of Kickstarter, came to visit the Media Lab at MIT recently. In that talk, he shared that he was initially the sole approver of Kickstarter projects. Their sole rule in the beginning, informal and unstated though it was, was “no bummers.” By that they meant no projects that employ guilt as a motivating force (e.g., dying children). They sought projects that were positive, and excluded cause-based fundraising. The company’s policy has clearly shifted from these early days, because even the company has agreed that Above The Game is a bummer. Maintaining a culture of positive projects is increasingly difficult as more projects are submitted, but crucial to the company’s brand identity.

My initial reaction to this petition campaign was: Why don’t the organizers send people upset about this to flag the project through Kickstarter’s internal reporting mechanism? That’s why it’s there, and this style of user-generated censorship has proven an effective way to silence offensive speech in other instances.

Well, it turns out, the organizers had used Kickstarter’s internal flagging mechanism to bring the case to the company’s attention, and it is still sending people that route, but Kickstarter itself had already released a statement declaring the book safely within their “current guidelines.”

The #FBrape campaign went after Facebook’s advertisers, quite successfully, operating on the assumption that the company is more sensitive to the ire of its advertisers than its users. Kickstarter lives and dies by its users, as the company collects a 5% fee on all successfully funded projects. The power and perception of its brand, then, drives its revenues, and so the DoSomething.org campaign targets the public’s relationship with that brand. (This isn’t to say that the company will react or not react because of the revenues attached to a decline in brand value.)

Kickstarter has made an endless number of awesome things possible, and they’ve directly stated that they find the content to be published in this book “abhorrent.” But they also don’t want to cancel pre-approved, successfully funded projects too often.

Kickstarter has since apologized, accepted the blame, clarified their community guidelines to prevent the funding of future seduction guides, and donated $25,000 to an anti-sexual violence organization.

They attribute their failure to cancel the project to the short window of time in which they were alerted to the problems with the campaign (hours before its conclusion), but also confirmed my assumption in this post: They hesitate to cancel projects because it alienates creators.

A commenter took issue with the “not enough time” excuse, noting that according to this CNN article, the company had previously cancelled a fake Kobe beef jerky campaign minutes before it reached its deadline. Coincidentally or not, that Kobe jerky campaign is one of the four projects Ken Hoinsky had funded prior to launching his own campaign.

What Do You Do When the Crowd Funds Something You Abhor?

There’s plenty of speech in our society that is legally protected, but still abhorrent. Collectively, we impose other social penalties on speech we abhor, like developing a commonly held negative reputation of that speaker, limiting the reach of their voice. We battle for attention in society, as Westboro Baptist Church shows up to protest and mar unrelated funerals, and as Hoinsky looks to leverage the controversy around the book into additional attention. This is just a limited-run book of advice for guys who can’t get laid. These questions will only grow more relevant as civic crowdfunding and crowdfunded business investment take off.

In this case, Kickstarter proved mostly responsive to the concerns people felt about the project in question. But we’ll see these issues again, as we see more crowdfunding projects and a proliferation of platforms seeking to replicate Kickstarter’s mechanics without necessarily replicating their standards. It’s unlikely that this is the last time a critical mass of people will again desire something controversial. How do we balance the exciting democratization of funding channels with standards to check our base impulses and ensure basic human decency? We might bring the Federalist Papers with us to the beach this summer.

This is an updated version of a post that originally appeared on the MIT Center for Civic Media blog.