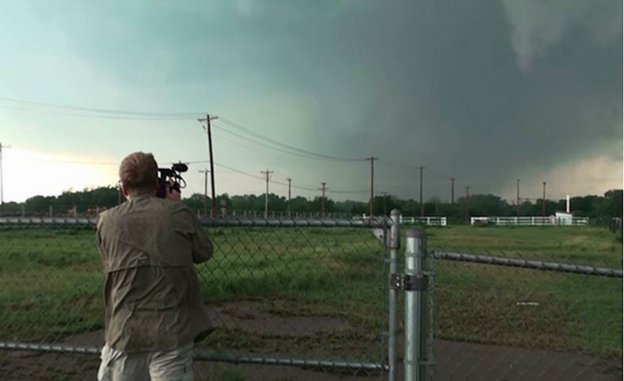 Mike Boettcher, OU professor and ABC News correspondent, stands in the path of the tornado. Photo by Jon Haverfield.

Oklahoma University graduate Dan Shepherd has covered numerous disasters around the world as a longtime network TV producer, but coming back to Oklahoma to cover the Moore tornadoes really hit home.

He was in Florida covering another story for NBC News when he saw video of the tornado’s fury being fed into the bureau from NBC affiliate, KFOR.

“In this era of immediate news coverage, you don’t have time to sit down and reflect. You have to describe the scene, as you are moving through it live. I want to try to give the students the tools they need to do that." -Gaylord professor Mike Boettcher

“Every shot that they zoomed into revealed total, massive destruction,” Shepherd said. “Once we saw that, we knew we were watching a major story unfold.”

Shepard was one of the many students, professors, and alumni of the Gaylord College at Oklahoma University who, as the sky went black on May 20, converged on the area of destruction in OU’s backyard in order to cover the overwhelming story and help get information out to an anxious public.

NBC knew that Shepherd was from Oklahoma, so he got the call soon after the storm hit to go to his home state to cover the disaster. It was a call he was expecting but one that he knew would be difficult to answer.

“The hardest part was seeing a town that you’re so familiar with while going to school at OU, and comparing what it used to look like with the devastation that’s staring at you in the face,” he said.

“All the streets that I was familiar with, the neighborhoods where I’d driven through many years ago, and the high school football stadium that I had been to decades past,” Shepherd said, were devastated. “It’s never easy to see total devastation like that, but it’s especially hard when it’s in an area that you call home.”

Shepherd spent a week covering the unfolding story, but one interview continues to touch him the most, “hands down,” he said. That is the story of high school student Alyson Costilla. Heeding warnings about the approaching storm, the 18-year-old had gone home early from school. Her mother, Terri Long, was racing home from work to be with her when the tornado tore through Moore. Long took cover inside a 7-Eleven store, which was in the direct path of the tornado. It was there that Long, along with several others, perished.

“We met Alyson a few days later as she prepared for her senior graduation at Southmoore High School,” Shepherd said. “In one week, Alyson lost her Mom and her house, as she was preparing for the pinnacle of her high school career. She was the strongest and most composed young woman I’ve met in a long time.”

Shepherd has since been called to produce other stories when more tornadoes raced across Oklahoma on May 31. But amidst the tragic stories, Shepherd recognizes a bright spot in his job:  He gets to share with the world Oklahoma’s legendary kindness.

“This storm will stay with me because it was home, but I was also amazed at how quickly people came out to help,” Shepherd shared. “Total strangers cleaning out debris, organizing debris-clearing crews, and bringing in supplies were common place.”

Shepherd went on to explain, “I also think that this is especially typical of Oklahoma and its residents’ way of thinking. There’s a job to do, go out and do it, don’t complain, and be thankful you’re in a position to help. Oklahoma generosity never ceases to amaze me.”

Students Rush to the Scene

Leslie Metzger, a Gaylord College of Journalism undergraduate alumna and current Gaylord graduate student, was one of the first student journalists to rush to the scene after The New York Times contacted Gaylord College on Monday evening asking for help in covering the storm.

Metzger went to Journey Church, one of the Norman relief centers that had been set up just moments after the tornado touched down. What she saw, she recalled, when she entered the large building on the edge of Moore was overwhelming.

“When I walked into the door, I saw nothing but looks of shock and people in a daze,” Metzger said.

All around her survivors flooded in while dozens of volunteers waited to carefully tend to them. Metzger looked for a person to interview and stumbled upon a mother and her 4-year-old daughter sitting alone at a table eating oranges. The little girl was scribbling a red crayon furiously across a piece of paper. Metzger said the marks looked like a child’s version of a tornado. The two had witnessed the twister’s wrath close-up.

“It was heart-breaking to see the little girl draw red blobs of devastation,” she said. “And you wondered how this would affect her in the future. At the same time, your heart broke for the mom because there was only so much she could do to protect her, and she didn’t know where her husband was or if they had a home to go back to.”

Metzger was just one of many Gaylord students who immediately sprang into action the moment the tornado swept through Moore. Jessica Bruno and Kenzie Meek-Beck, Gaylord College seniors, volunteered to help any news organization that needed extra hands.

“My first instinct as I was watching the news was I want to be out there covering this,” Bruno said. “It was becoming one of the biggest stories of the year, and I couldn’t stand the idea of being a student journalist 20 minutes away not doing anything.”

“I learned that as a journalist you can never be fully prepared for something like this, but you have to just jump in there and do your job,” Bruno said.

Meek-Beck added, “Even though it was scary and something different from what I was used to, my education had given me the resources and understanding of what I had to do in an intense time.”

The Tornado Was Coming Right At Us

Gaylord professor Mike Boettcher already had been following the tornadoes that ravaged Oklahoma the day before as a correspondent for ABC News when he learned that Moore could be in the crosshairs of yet another killer storm. He contacted Gaylord journalism student and senior Jon Haverfield, who is a storm chaser for several local and network news organizations, and asked him to help report on the storm.

“Jon knew the storm would ignite in Newcastle and that’s where we were when it all started,” Boettcher said.

The two chased the tornado right to Moore and to the door of the Briarwood Elementary School, which took a direct hit.

“The tornado was coming right at us,” Haverfield said. “The debris was very large. It was the biggest tornado I’ve seen, and the roar was loud and similar to a waterfall sound.”

Fearing for their lives, the two moved to safer ground temporarily and then came back to the school — not to report at that moment but to help with the rescue.

“Near Briarwood there was panic in the air. Parents were arriving and were searching for their kids,” Haverfield said. “The cries I heard from the mothers is something that I never want to hear again.”

It was at the school when Boettcher realized this storm was like no other he had covered.

“As I was walking in towards Briarwood, I was following a grandmother who was in tears,” Boettcher said. “She was asking people that passed her if they knew what happened at the school. She pleaded, ‘Has anyone seen my granddaughter?’”

“We probably walked a half a mile with her through the destruction,” he added. “She was devastated. She finally made it to the elementary school and saw that all the children there had survived. Seeing the relief on her face was the only good thing for me up until that point.”

Boettcher is no stranger to scenes like this one; he covered the 1999 Moore tornado as a network correspondent, the 1995 Oklahoma City bombing, and recently won two national Emmy Awards for his coverage of the war in Afghanistan.

Boettcher added, “Even in the 1999 Moore tornado, I don’t remember the damage being quite like that. It was remarkable.”

Boettcher now plans on using this experience as he teaches the next generation of journalism students how to cover breaking news.

“In this era of immediate news coverage, you don’t have time to sit down and reflect,” he said. “You have to describe the scene, as you are moving through it live. I want to try to give the students the tools they need to do that.”

This is an edited version of a story that originally appeared on the website of University of Oklahoma Gaylord College of Journalism and Mass Communication.

Kathleen Johnson is the McMahon Centennial Professor at OU. The McMahon professorship enables the college to attract experienced professionals to train the next generation of broadcast journalists. For more than ten years Johnson worked as a news executive for major market television stations across the country including in Oklahoma, Florida and Washington, D.C., specializing in creating and launching cutting-edge television news programs. Johnson most recently worked as a senior executive in the direct-to-home satellite television industry, launching the nation’s first 24-hour children’s educational TV network. She is also president and CEO of her own national media company, KJ Media. She has received a national Emmy nomination and four regional Emmy awards as well as nine Telly awards for her work in children’s television, news documentaries, and long-format entertainment productions. Additionally, she is the recipient of an Edward R. Murrow Award from the Radio Television Digital News Association, an Associated Press award, and a New York Film Festival award.

The Gaylord College of Journalism and Mass Communication is celebrating 100 years of empowering storytellers through excellence in journalism education. Gaylord College awards a bachelor of arts in journalism with emphasis in advertising, broadcasting and electronic media, journalism, professional writing or public relations. Advanced degrees offered are the master of arts in mass communication, master of professional writing and doctorate of philosophy in mass communication.