5 Tips to Stretch Yourself Beyond Text to Tell a Story 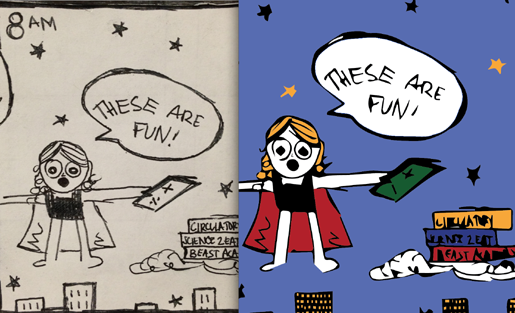 The author used Adobe Illustrator to give her drawing color.

How can I best tell the story?

That’s one of the most important questions I’ve learned to ask while working at Reese News Lab.

"As an avid consumer of news, I’ll be the first to admit that other forms of journalism are often more engaging and tell the story better than a block of text."

I’m a word person. I like news writing, and I dabble in short stories and poetry. There’s a huge part of me that says, “You know how to write. Why don’t we stick with that?” But as an avid consumer of news, I’ll be the first to admit that other forms of journalism are often more engaging and tell the story better than a block of text.

Rather than say “this is a story for a designer,” I’ve sought out non-traditional ways to tell stories that I, as a writer with no programming or design background, can actually do. This is not to say that I don’t consult a designer before, during and after creating the story, because I do. But there are certainly ways that a traditionalist like myself can add a little pizazz to a story through graphics and multimedia.

Here are some basic, non-traditional lessons that I’ve learned this summer:

While working on a story about the learning losses that kids face in the summer months, I compiled a list of STEM summer camps in the state of North Carolina. But I wanted to make the list searchable. If your kid was a 5th grade student interested in engineering, I wanted you to be able to easily find those camps in that list. I didn’t know how to create it myself, but it turned out that we already had the code for a searchable data table. All I had to do was enter the data.

While researching a story about math textbooks done in comic form, I decided that I wouldn’t have a complete package without a comic strip to accompany the text. I didn’t know how to draw a comic with software, so I hand-drew one. After it was done I scanned and inserted it into an Adobe Illustrator document. I had no previous Illustrator experience and had honestly, always been a little intimidated by my many peers who listed it on their resumes. But the program is actually pretty user-friendly, and I was able to produce a comic strip that enhanced the story.

3. You can learn video

I’ve always been impressed by videographers. I think I’ve always been a little sure that it’s a skill you’re just born with. While natural talent certainly doesn’t hurt, it is possible to shoot and edit good video even if you’ve never held a video camera before (as we all did for our Bald Head Island story). Here are some some basic video tips I picked up:

4. There are free infographic tools available

If you’re an experienced Illustrator, you can probably create an infographic all by yourself. But if you’re a novice, there are a number of free websites that can help. For a story on teacher salaries, I had numbers and information that I wanted to organize in a way that was easy to understand. I used a site called piktochart.com to create an infographic.

If you can’t figure something out, use a search engine. You’ll likely find a handful of helpful how-to videos and tips. Also, use the Internet if you’re looking for inspiration. Check out non-traditional methods other people have used and then add your own style to make it work for your story.

If you want other non-traditional examples, check out these that STEMwire has created:

And non-traditional storytelling isn’t just for the news, as my colleagues in the Reese News Lab Summer Start-up have found. It’s also helpful in business.