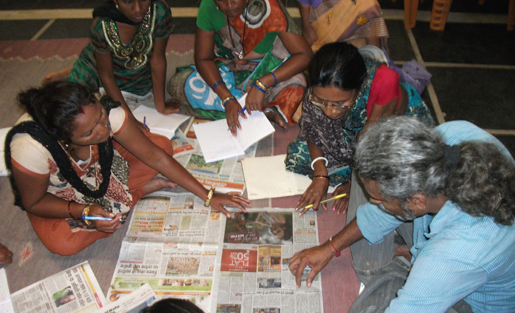 The world lauds the way India leads its polio drives. But small hamlets like the Sakhri Village in Madhya Pradesh, that fall outside these efforts, don’t make news. Their story would, perhaps, never have been told. But, thanks to the efforts of crusading journalist Saroj Parasthe, not only was the situation highlighted, but also remedied.

“When I realized that children here hadn’t been immunized for the last two years I was shocked,” she said. “I have children myself, and I know the dangers of not immunizing them on time.” Her story titled, “Maternal and Infant Health Endangered by Health Center Scam” (below), forced attention on the situation of these poor, illiterate villagers whose only health center was completely dysfunctional.

"Today it's our journalists who counter the usual government line about why people are dissatisfied. They bring out the voices of those displaced and whose basic human rights are threatened." -Jessica Mayberry

Parasthe’s work ensured that the 137 families residing here received the health care they were entitled to. This is one of 50 issues of corruption or government neglect that the Video Volunteers’ (VV) Community Correspondents have been able to solve in the last few years.

Parasthe makes an unlikely journalist. A high school graduate, she hasn’t gone to college, and her medium of communication is Hindi. “I work with different non-governmental agencies in my area, and it was through them that I was selected for a training session with the Video Volunteers organization,” she said. “They taught me how to shoot and edit video, and more importantly, speak to people so that real issues can be highlighted.” Before Video Volunteers, Parasthe had never even taken a photograph. “I was selected for the training because I was afraid of coming forward and speaking up,” she said.

Jessica Mayberry founded Video Volunteers after spending a year training rural Indian women in filmmaking as a W.J. Clinton Fellow of the American India Foundation. Set up in 2006, VV is 7 years old today. “The primary reason behind VV was the simple belief that women taught to use a camera could be empowered to bring about positive change in their situations and communities,” Mayberry said. It was the end of a full working day, yet Mayberry’s enthusiasm drowned out the static on my bad phone connection.

“Today it’s our journalists who counter the usual government line about why people are dissatisfied,” she said. “They bring out the voices of those displaced and whose basic human rights are threatened.” These journalists form a part of the IndiaUnheard news section, a community news service launched by VV in February 2010. Comprising a network of 125 Community Correspondents spread across 24 Indian states, these reporters, often from very marginalized and neglected communities, offer a glimpse into an India that doesn’t make the headlines.

(For more on Video Volunteers and India Unheard, you can read Jessica Mayberry’s posts on Idea Lab, where she wrote about the projects in detail.)

VV is the most active in Central India — in areas like Jharkhand, Madhya Pradesh and Chhattisgarh where issues of insurgency and land grabbing are rife. “70 percent of the population here is tribal but in the mainstream press there are no tribal journalists,” Mayberry said. “Most of our community correspondents are tribals and have grown up with the realities of displacement. They report from the unique perspective of those who live the issues they report on.”

This concern is reiterated by Shubhranshu Choudhary, Knight Fellow and founder of citizen journalist news service CGNET Swara. “The Chhattisgarh Journalists Union had more than 900 names of journalists allocated to cover the area from different media organizations listed,” he said. “I tried to find out how many journalists spoke any of the tribal languages of the region they had come to cover. I could find only a handful.”

Some of the most active reporters for the IndiaUnheard news are men. But it’s the impact that VV’s training has had on women that draws attention. By enabling women to describe underreported perspectives, VV has ensured a whole new variety of voices who perhaps would never have found expression. These women journalists don’t just report on the typical “women’s issues” we might expect them to focus on; instead their work shows that no topic is taboo and no situation too complex for them to get to the bottom of.

Savitha Rath’s story, “Coal Satyagraha: My Land My Coal” (below) underlines the corruption and greed that make the mining industry in the country and the plight of the poor from whom land is snatched away in the name of development. “I loved school and really wanted to study,” she said. “But I had to drop out early because my father couldn’t afford it anymore.”

Being a natural activist, she was always on the lookout for opportunities that could use her skills. With Video Volunteers, she added a new dimension to her activism. “They trained me to use a camera and record the voices of people, their tears, their struggles,” she said. “Suddenly I realized I really had the power to make a difference.”

While covering one story on the people’s protests against illegal mining she was subtly threatened by the police. She knew they could prevent her work from being broadcast. She hid her camera under her clothes and was escorted back to her office by six friends from the area on bikes. “It was so exciting — there was no time to feel scared,” she said, her laughter lighting up her voice.

Video Volunteers recruits journalists through different non-governmental organizations and social movements and then provides the requisite training. “Professionalizing something like this takes time,” Mayberry said. “Distributing our reports is often tough. But we’re not just trying to prove a business model, though we believe a ‘rural stringers network’ is highly scalable and meets a real need in the Indian media ecosystem. We’re a human rights organization, that is becoming known as a group that isn’t afraid to speak up on harsh realities.” And 25-year-old Zulekha Syed’s work underlines this.

She has been deeply engaged in exploring the controversial plans to demolish slums and build both high-income and low-income high rises, called the Slum Redevelopment Program. A resident of the Vikhroli park site slum, Zulekha gives an in-depth view into the lives of Mumbai’s other half, the half that is usually brushed under the carpet, or bulldozers. In her recent video, “Scenes from Mumbai’s Class War: Builders Vs. People,” she highlights the threats the people for whom apparently the government is spending millions is threatened and harassed. She was recently accepted for a graduate degree in mass communication in a city college in Mumbai. It is very rare for so-called “slumdwellers” to make it into institutions like this.

VV is mostly funded by donations and foundations like the Knight News Foundation and Christian Aid. All VV community producers are paid for their work.

“30 percent of our budget is earned income that we get via trainings and consultancies,” said Mayberry. “We tried for a couple of years to sell content to mainstream media.” VV tied up with News X a popular English-language television channel in India.

But generating revenue through selling content to mainstream media channels is perhaps the hardest aspect of their work.

“It’s very tough to get networks to pay,” she said. “We are hoping that channels will realize how effectively our reporters can be used as local stringers.” But increasing urbanization in India has led to declining interest in the kind of issues VV highlights as well. “I hope some MBA sitting somewhere hears us and come up to help. Our next challenge is to work out the business model of a rural stringers network. There is a big business opportunity waiting to be explored.” Until then, VV continues to change India, one video at a time.