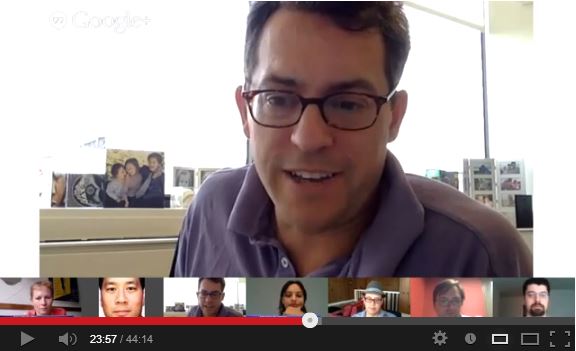 Vox Media CEO Jim Bankoff joined this week's episode to talk about the success of live-blogging and live-streaming tech announcements in Silicon Valley and beyond.

This week’s episode focuses on the role of live coverage in the media ecosystem. When does it work? When does it not? How do you balance speed and accuracy? How does it pull in readers? We’ll talk to some of the leading minds in breaking news journalism and how their live coverage has meant big bucks. First up, Texas Tribune’s Rodney Gibbs talks about live coverage of Wendy Davis’s state senate filibuster. Then, we’ll talk to Vox Media CEO Jim Bankoff about the popularity of live-blogging on Vox sites. MediaShift’s Mark Glaser hosts, along with Ana Marie Cox from the Guardian, Mónica Guzmán from the Seattle Times and GeekWire, and Andrew Lih from American University.

Note: The podcast will be off on July 5 for the holiday weekend. We’ll be back in action on July 12 with Facebook’s Vadim Lavrusik as our special guest!

Jim Bankoff runs all aspects of Vox Media, one of the fastest growing online publishers, focused on the sports, personal technology and gaming categories. Vox Media was named Digital Publisher of the Year by Digiday in 2013. SB Nation, its sports brand, boasts 300 individually branded, fan-centric sports communities. In November 2011, Vox Media launched The Verge, covering technology. A veteran of the online industry, Jim developed and led dozens of the most popular websites on the internet including AOL, Mapquest, Moviefone, AOL Music and Engadget as an Executive Vice President at AOL. He co-founded TMZ.com and also oversaw AOL’s industry-leading instant messaging services, AIM and ICQ.

Rodney Gibbs is chief innovation officer at the Texas Tribune, making sure it leverages technology wisely and creatively across all aspects of the organization. He has started two digital media companies. The first, Fizz Factor, developed handheld games for Nintendo and Sony platforms. The second, Ricochet Labs, created social-mobile games for news and entertainment brands, including the BBC, Lollapalooza, and the Texas Tribune. Active in the digital media community, Rodney chairs the advisory board of the University of Texas’ computer science game program, and he serves on the boards of KUT, Austin’s NPR affiliate; the Austin Film Society; and KLRU, Austin’s PBS affiliate.

Texas State Senator Wendy Davis held a 12-hour talking filibuster June 25 in hopes of blocking a bill that would ban abortion after 20 weeks of pregnancy and close many clinics that offer abortion services in the state. The Texas Tribune, a nonprofit media organization based in Austin, offered constant live-streaming coverage up to and including the post-session debacle as to whether or not there was a final vote on the legislation. With a live-stream, live-blog and analysis, the Tribune woke up the next morning to heaps of praise. Twitter users also served to stop debate when rules weren’t followed, and the hashtag #StandWithWendy galvanized support for the filibuster. The same could not be said for CNN, which ignored the filibuster and instead aired a segment on blueberry muffins during the most momentous parts of the filibuster. Fox and MSNBC were also mocked, and certain parts of the debate were muted to TV audiences. (CNN and Fox also delayed coverage of the Supreme Court’s ruling on the Defense of Marriage Act June 25.)

This was a home field story for the Texas Tribune, but did you expect such wide international exposure? What are the challenges with live-event coverage online? Filter the good, bad and incorrect?

Silicon Valley is often abuzz during the latest technology unveils, whether they be from Apple, Google, Facebook or Twitter. Live-streams, live-blogs, hashtags and briefs triumph in events heavily publicized and prophesied in media days before each announcement. One up-and-coming player in this realm is Vox Media, which recently saw a boom in traffic during the gaming E3 conference and the Worldwide Developers Conference for Apple: 3.2 million uniques in two days, and more than 500,000 video streams. We’ll talk to Vox Media CEO Jim Bankoff about the custom tech tools and studios they’ve built to take advantage of live event coverage.

How do publishers make money on those big traffic bumps? Is the traffic here today, gone tomorrow? How do you justify the investment?