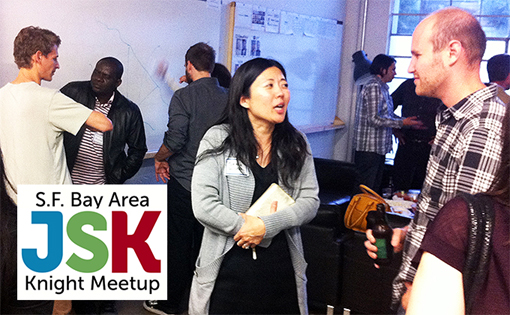 Knight Alumni and Fellows brainstorm with the media entrepreneurs at Matter, a startup accelerator in San Francisco. It was the second event organized by the S.F. Bay Area Knight Alumni Meetup. Photo: Robin Evans.

About 20 Knight Alumni and Fellows recently converged on a big-windowed workspace in San Francisco’s South of Market district. Sure, there was pizza and beer, but what really drew them was the chance to crunch ideas with developers working to “change media for good.”

The dozen or so developers aren’t journalists. They are media entrepreneurs at Matter, a startup accelerator funded by the Knight Foundation, KQED and PRX (Public Radio Exchange). Its mission is to be a place where “the values of public media meet the mindsets of Silicon Valley entrepreneurship.”

The teams at Matter were selected for a four-month program that gives them $50,000, training, mentoring and assistance as they develop and test their prototypes. Matter’s operations director is Jigar Mehta, the 2011 Knight Fellow behind the “18 Days in Egypt” crowd-sourced documentary and a former New York Times video journalist.

The event was the second for the newly formed S.F. Bay Area Knight Alumni Meetup, which brings together Knight alumni for mutual support, professional growth, and to extend the mission of the John S. Knight Fellowships at Stanford — to promote innovation, entrepreneurship and leadership in journalism.

Each project team at Matter described what they were working on. Afterward, Knights gravitated to different team members for more personal conversations and brainstorming.

The media innovation teams currently at Matter are:

Jigar’s colleagues at Matter are CEO and partner Corey Ford, who built Runway, an incubator for entrepreneurs at Innovation Endeavors, taught design thinking at the Institute of Design at Stanford University and was a production manager for the PBS/WGBH series Frontline; and Jake Shapiro, founding CEO of PRX, the award-winning public media network, and former associate director of the Berkman Center for Internet and Society at Harvard.