10 Tips to Filming in an Epidemic: ‘Hit and Run History’ Hits Cape Verde 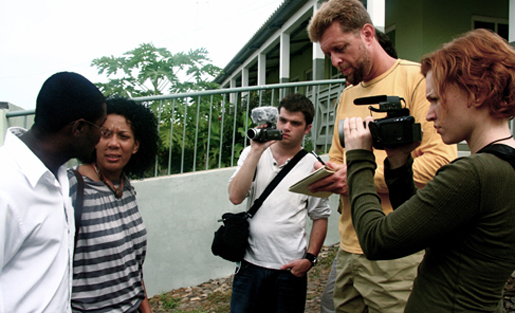 While following the story of the Columbia Expedition around the world, "Hit and Run History" plunged into Cape Verde's dengue fever epidemic, bringing relief supplies to a hospital on the island of Fogo.

Only days before the production crew for “Hit and Run History” was to board a flight to Africa, I got a message over Facebook: “Bring plenty of bug spray.”

"In November of 2009, having booked tickets and packing our gear, we learned the news: dengue fever, heretofore unknown in the desert islands, had arrived in Cape Verde and hit hard. Thousands were infected, and six people dead. A national epidemic was declared."

The year prior, we had taken on the story of the Columbia Expedition — the first American voyage around the world. With the rapid changes in digital filmmaking and social media, our task of going from zero to pilot episode had been breathtakingly easy. Gathering a crew from the shores of Cape Cod, many of us never having filmed anything more than a birthday party, we ranged all over Southeastern New England like Gumshoe Historians. With little training except for my own knowledge of Columbia, it was a guerrilla history lesson. (Read more about our early experiences in this first post on MediaShift.)

But after a few grants and proceeds from screenings, and an overwhelming public reception, we had committed to following up with a second chapter. Leaving Boston in 1787, the ship Columbia’s first stop was the archipelago of Cape Verde, 300 miles west of the Sahara.

This is history as a travel-adventure series, following the story point-to-point. It’s also an ongoing story about how the recent cascade of advancements in technology have lowered the entry point for anyone to get into global documentary filmmaking. Social media additionally played a key role in probably saving our lives and the chance to help others.

In November 2009, having booked tickets and packing our gear, we learned the news: Dengue fever, heretofore unknown in the desert islands, had arrived in Cape Verde and hit hard. Thousands were infected, and six people dead. A national epidemic was declared.

“We can’t go,” was the initial response. But realizing we were uniquely equipped to both help and bring the story home, it was obvious. “We have to go.”

When heading directly into a tropical epidemic to film an adventure, consider these tips:

1. Learn Lessons from the prior episode

By late 2009, HD video was now the standard. We would be more careful with our shots, not just “leave the camera on” as before. Sound had to be better. Jay Sheehan, our production manager, had spent days cleaning up audio for our pilot. This time we would be mic’d or have a camera with a shotgun mic trained on each speaker. Selections for these were expanding and prices dropping.

Columbia was in Cape Verde a month. We figured there was maybe half an hour’s worth of material. The climax was a dramatic incident where Captain Kendrick, the expedition’s commander, drew his sword in the streets. So we tapped the budding DIY aesthetic. While still at home, we commissioned a blade. Rusty Griffin, a metalsmith, agreed to forge one for us. We filmed the whole process, starting with a visit to the vault at the USS Constitution Museum to find a design. Before we left for Cape Verde, we got to test that sword out — old-fashioned fun.

3. Get a small, street-smart crew

Reality programming meant tastes were changing. Viewers wanted to see our crew in the shot, hear what they had to say. Our group of five would be lightly equipped, looking more like a group of tourists. We’d be less likely to be a target of theft or hit up for location fees if our cameras look less like rocket launchers and more like soda cans.

4. Use Social Media to find experts

Cape Verde has two official languages: Portuguese and Creole. Luckily, Southeastern New England is home to not only a large Cape Verdean community, but generations of Portuguese, Azorean and Brazilian immigrants. We posted an Open Call on our Facebook page to find a native speaker to join the crew. With many great applicants, we found a good translator.

And we’re so glad we did. Right after we bought our airline tickets, our translator begged off. Then Peter Burgess, a finalist in our Open Call, messaged me on Facebook about the outbreak of Dengue Fever in Cape Verde. A mosquito-borne illness in a desert island nation that was completely unprepared.

I’ve been blogging since before you owned a computer. When I posted to CapeCodToday what we were heading into, it was picked up as news and caught the attention of other media. News of Cape Verde is big in Southeastern Massachusetts because families go back and forth to the homeland regularly. CapeCodToday commissioned us to file three news articles from our trip, focused on the dengue epidemic.

At our pre-trip crew meeting, Cape Cod Times reporter Patrick Cassidy sat in. After gauging our crew’s lack of concern over facing a deadly epidemic, he heard my announcement. The Brockton Neighborhood Health Center was collecting supplies for the next flight over to Cape Verde. I had called them, offering to bring supplies, and then offering our spare ticket from our recently departed translator for an aid worker. BNHC’s Luisa Schaeffer agreed to return with us to her native Cape Verde. Now we had a translator as well as a guide. On the day we left Boston, we were front-page news.

8. Get into the story

In Cape Verde’s capital of Praia, the president’s brother picked us up at the airport. Two days later, we flew to the island of Fogo, where the hospital was in dire need of supplies. Columbia never came here, but we had to cover this. Our checked bags contained the basics for fighting the symptoms of dengue: Ipuprofen, cotton balls, rubbing alcohol, Vitamin C. The hospital was handling three times their capacity of patients, with cot-filled tents overflowing the courtyards and parking lot. It was so quiet despite the throngs of patients and visitors. We filmed it all. Then the country’s television station showed up and filmed us.

9. Post-production from the field

By that evening, we were on the small and rustic island of Maio. Stopping into a corner market, we watched the broadcast from the hospital. Within 48 hours of being in the country, we were on the national news. The next day, our DP, Alex Schwantner, edited a short from our visit to the hospital using my MacBook Pro and a rugged portable LaCie drive. Even here, Internet access was available, found in the back of a tiny hardware store. We uploaded this video to YouTube and an article to CapeCodToday. During our whole time here, we hadn’t seen a single foreign journalist. We were it.

10. Circle back to the original story

When we returned to Praia, the epidemic was subsiding. Still taking care to avoid dawn and dusk, when mosquitoes feed, we hired a rowboat over to what the American sailors called the “Isle of Quails.” Columbia had dallied a month there, with her officers arguing mostly about their water supplies. The first mate was fired. The ship surgeon escaped ashore. Meeting the doctor in the street, Captain Kendrick drew his sword to force the man back to the ship. Local soldiers intervened. After that, the Americans had to get out fast. Their next stop was far to the south.

Same for us. Or so we thought.

The following spring, we were at the South Shore Natural Science Center, screening our new “Cape Verde episode. The audience loved the sword parts. The Fogo hospital scene had everyone riveted.

The author and Alex Schwantner of ‘Hit and Run History’ in Praia, Cape Verde.

In the Q&A afterward, a question came up if we would consider re-purposing it as a web series. “No,” I said. “It works as a whole, not little pieces. And we don’t want to just give it away online.”

“One of my editorial beats was covering the station’s online history channel,” Kyanna said later. “So when I was invited to this screening, I went and instantly saw the potential for an exclusive online video mini-series.”

We saw it as a chance to try something different.

Two-time Emmy nominee, Master Mariner and op-ed columnist Andrew Giles Buckley has followed the Columbia Expedition, the first American voyage ’round the world, for nearly 20 years. His productions Hit and Run History and Through My Eyes have travelled to Cape Verde, the Falklands, Cape Horn and Chile. Awarded 13 Massachusetts Cultural Council Grants and the first-ever Social Media Outreach Grant by the Massachusetts Foundation for the Humanities, in May of 2013 both series were each nominated for an Emmy. Follow the story on Twitter @hitrunhistory and @tmyeyes.