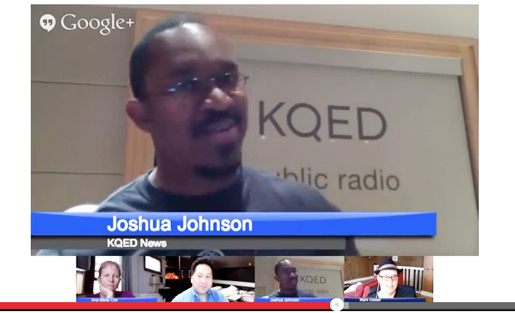 KQED's Joshua Johnson discussed the future of AM/FM radio, in the face of a Stitcher survey that showed most Americans are dubious it has a future

Who’s snooping on whom? First came the news that Bloomberg reporters were using the company’s terminals to find out when federal officials were logging into the system. Then came the news that the Department of Justice was secretly obtaining phone records of up to 20 journalists at the AP. While both cases were not connected, they point to a blurring of boundaries in the digital age, when digital spying and cyber-security grow ever more important. Special guest Declan McCullagh of CNET joins us to talk about our lack of privacy and what we can do about it. Plus, special guest Brian Stelter of The New York Times will talk about how broadcast TV networks are struggling against cable, streaming competition and even upstart Aereo. And our third special guest Joshua Johnson, a newscaster at San Francisco public radio station KQED, will rebut a survey from Stitcher showing that 57% of Americans believe AM/FM radio will fade away in five years. The roundtable will be hosted by Mark Glaser, with regulars Ana Marie Cox from The Guardian and Andrew Lih from USC.

Joshua Johnson joined KQED Public Radio in July 2010 to be part of the newly merged on-air and online news team, KQED News. Each weekday morning he writes, reports, edits and presents Bay Area news during Morning Edition. He also serves as substitute host on KQED’s daily talk show, “Forum,” and on its weekly news-in-review show, “This Week In Northern California” on KQED Public Television. Johnson joined KQED after six years as an anchor/reporter in his native South Florida. There he helped to launch WLRN Miami Herald News, an innovative partnership between WLRN Public Radio and The Miami Herald. Before working in public radio Joshua was an assignment editor for WPEC-TV in West Palm Beach, his hometown, and for WTVJ-TV in Miami. Follow him on Twitter @jejohnson322.

The Justice Department secretly seized two months’ worth of phone records for more than 20 phone lines used by The Associated Press. Officials justified the seizure as a necessary step in the investigation of a leak that led to a May 7, 2012 AP story revealing the details of an Al Qaeda terrorism plot foiled by the CIA. News organizations are usually notified in advance of a subpoena for phone records, but in this case, the Justice Department argued that prior notification would “pose a substantial threat to the integrity of the investigation.” Journalists have condemned the seizure as yet another Big Brother-esque affront to privacy and the freedom of the press, but as David Carr of The New York Times points out, snooping is “a two-way street.” This past week, Bloomberg terminal clients, such as the U.S. Treasury and FDIC, found out that Bloomberg reporters were using the terminals to monitor their login activity. In the information age, writes Carr, “The absence of friction has led to a culture of transgression…the most ubiquitous threats to our privacy do not originate in some secret government bunker. In the media, in the general public, in business realms, we are keeping an eye on ourselves.” In an age of rampant privacy breaches, what is the appropriate course of action for the government and journalists? Were the Justice Department’s actions justified? Were Bloomberg’s? When it becomes possible to know anything and everything, what should the boundaries be?

No Warrant? No Problem. How the Government Can Still Get Your Digital Data (ProPublica)

This week marks the beginning of the biggest ad-selling season for broadcast networks. Commonly known as “upfront” selling season, this period is when networks preview their upcoming shows for fall to persuade advertisers to buy commercial time. Upfront rates are projected to rise 6 percent this year, but this is a much lower increase than networks enjoyed in previous years. The problem is increased competition from cable TV as well as streaming rivals such as Hulu, Netflix, Amazon and YouTube. The newest threat to broadcast networks is a startup called Aereo, which captures free over-the-air signals from stations and streams them to their own paying internet subscribers. Several broadcasters have attempted to obtain injunctions against Aereo on the grounds of copyright infringement, but so far without success. CBS, Fox and Univision have threatened to go off the air if Aereo continues to operate. In a changing media landscape, most broadcast networks have failed to adapt — how should they adapt if they want to stay relevant? CBS has fared better than many other networks — why is that, and what lessons can other networks learn from CBS? Do the failed Aereo lawsuits indicate a shifting institutional perspective on copyright and intellectual property?

Broadcast TV Is Having a Rough Time, but Don’t Count It Out (AdAge)

Market research firm Harris Interactive this week released the results of a survey where a majority of Americans, 57%, predicted the demise of AM/FM radio within five years. The survey was conducted on behalf of Stitcher, an on-demand internet radio streaming service. Among students, 71% predict the demise of over-air radio in five years. The survey also found that young adults are far more likely to consume media (music, movies, television) via on-demand rather than traditional sources. Respondents frequently cited the ability to avoid advertisements as a major appeal of on-demand services. However, market research firm Arbitron found that 90% of adults still listen to AM/FM radio weekly, and it remains a popular choice with drivers. Will online streaming, satellite and podcasts ever be able to completely replace AM/FM radio? Some traditional radio outlets have started offering their content for on-demand streaming as well. Will consumers choose to listen to this on-demand version of AM/FM content, or will they continue to choose other providers such as Pandora or TuneIn? To what extent should the survey results be taken seriously, given that they were conducted on behalf of an Internet streaming company?

Is AM/FM Dead? Majority Say On Demand is The Future (Stitcher blog)