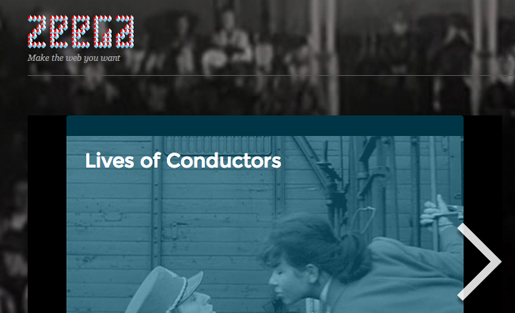 In 24 hours, Zeegas — a new form of interactive media — will be installed on four projection screens at San Francisco’s renowned Museum of Modern Art. This showcase is part of “The Making Of…“ — a collaboration between award-winning NPR producers the Kitchen Sisters, KQED, AIR’s Localore, the Zeega community and many others.

Join in this collaborative media experiment and make Zeegas for SFMOMA. To participate, log in to Zeega and create something for the exhibition. To make the simplest Zeega possible, just combine an animated GIF and a song. And if you want to do more, go wild.

You can contribute from anywhere in the world. The deadline is midnight EST on Wednesday.

If you’ve never made a Zeega, worry not: It’s super-easy. You can quickly combine audio, images, animated GIFs, text and video from across the web. Zeegas come in all shapes and sizes, from GIFs accompanied by a maker’s favorite song to a haunting photo story about a Nevada ghost town to an interactive video roulette.

The Zeega exhibition is one piece of “The Making Of…Live at SFMOMA.” As SFMOMA closes for two years of renovation and expansion, over 100 makers from throughout the region will gather to share their skills and crafts and tell their stories.

For the event, there will be two live performances of Zeegas and the “Web Documentary Manifesto,” and there will also be a session with Roman Mars (“99% Invisible”), The Kitchen Sisters, AIR’s Sue Schardt talking about Localore, and other storytelling gatherings throughout the festivities. For the full program, click here.

Jesse Shapins is a media entrepreneur, cultural theorist and urban artist. He is Co-Founder/CEO of Zeega, a platform revolutionzing interactive storytelling for an immersive future. For the past decade, he has been a leader in innovating new models of web and mobile publishing, his work featured in Wired, The New York Times, Boingboing and other venues. His artistic practice focuses on mapping the imagination and perception of place between physical, virtual and social space. His work has been cited in books such as The Sentient City, Networked Locality and Ambient Commons, and exhibited at MoMA, Deutsches Architektur Zentrum and the Carpenter Center for Visual Arts, among other venues. He was Co-Founder of metaLAB (at) Harvard, a research unit at the Berkman Center for Internet and Society, and served on the faculty of architecture at the Harvard Graduate School of Design, where he invented courses such as The Mixed-Reality City and Media Archaeology of Place.