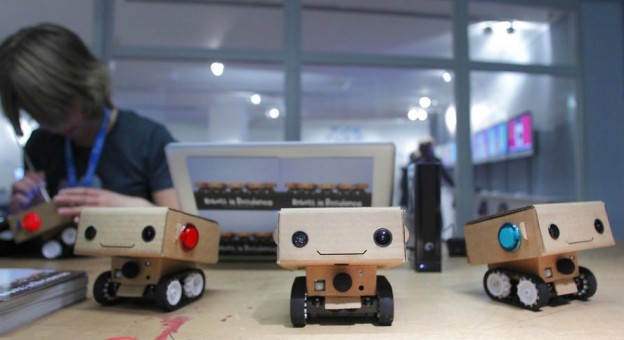 The opening scene of a Vimeo video about "Robots in Residence" with Alexander Reben and Brent Hoff, which was part of the Tribeca Film Festival's "Storyscapes" project. Image and video from Submarine Channel.

This year the Tribeca Film Festival took digital storytelling directly to the people with an entirely new juried interactive exhibition programmed by the Tribeca Film Institute’s director of Digital Initiatives, Ingrid Kopp. Nestled in a gallery-like space on Varick Street, “Storyscapes” featured five cross-platform/transmedia projects that were both free and open to the public via reservations and walk-ins. A fully interactive, hands-on, immersive experience, one of the projects, “Robots in Residence,” even allowed participants to take the actual robots out into the streets of New York with some surprising results.

Creating physical installations for digital and online-focused projects has its own challenges and rewards. I spoke with many of the Storyscapes creators to find out if participating in a Film Festival was worth the time, cost and effort as well as how the “up close and personal” audience experience and actual deployment of the project varied from their online presentations.

"There is no good way or bad way of doing [transmedia]; there are millions of ways, and this is why it’s so exciting to create in this field." -Bruno Choinière

For many of the creators, this was the first time they have seen their audience physically interact with their projects. With the exception of the Aaron Koblin and Chris Milk project, “The Exquisite Forest” installed at the Tate Modern in 2012, most of the projects did not have a physical component before participating in Storyscapes. Creating the actual display, as well as addressing technical issues, was an interesting challenge for the creators and forced them to take a hard look at how to best curate the online content in order to present it in a cohesive and creative fashion to the Tribeca Film Festival attendees and general public.

A screenshot from “Sandy Storyline.”

Laura Gottesdiener and Rachel Falcone of “Sandy Storyline” had to rework the interactive viewing and sharing elements of their project for Storyscapes.

“Both the content and engagement with the project is different in the physical space,” Gottesdiener said. “Online, we present hundreds of unique and contained stories side by side, allowing people to choose what they want to experience and in what order. In the physical exhibition, we pieced these stories together into a nonlinear yet singular storyline.”

They also limited the participants’ ability to contribute at Storyscapes by only accepting photographs, whereas the online participants could contribute audio and video files, as well as written content.

“Fundamentally, we spent hours exploring and envisioning how we could design an exhibition that would inspire people not only to watch but also to participate,” Gottesdiener said.

Gottesdiener said this choice was successful because at the exhibit, participants’ contributed pictures became part of the display almost immediately.   ”Sandy Storyline” had never been presented to the public, so they had to design and built the physical exhibit from scratch — a feat that wouldn’t have been possible without assistance from dozens of the project’s collaborators. Reminiscent of the debris left by the devastating storm that is the project’s namesake, worn wood housed multiple digital image displays that rotated images captured during the storm as well as during the recovery and aftermath. Gottesdiener considers the design a success on the interactive front, but she added, “The question moving forward will be how we can design exhibitions to inspire people to contribute deeper and more involved stories.”

A screenshot from the site of “Star Wars Uncut.”

For Casey Pugh of “Star Wars Uncut”, the actual volume level of the physical space was something he wished he had taken into account prior to installing at Storyscapes.

“I don’t think we anticipated the kind of noise we’d have to compete with for this installation, as each project had its own audio, plus the noise of people in the room. That is something we’d want to think about for another iteration of this, whether closing off the space to be more immersive or using a different audio setup so you could hear everything,” he said.

Wrangling the sheer content created from participants to present at Storyscapes was Pugh’s biggest challenge.

“We met with the Tribeca team to talk about the kinds of ideas we had for bringing “Star Wars Uncut” to life in person. I really wanted something that would show the breadth of the “Star Wars Uncut” universe, with so many different kinds of submissions, styles, and users of all ages; also, to allow audiences to lead the navigation of the experience since the project is all about the fans,” he said.

With the number of finished scenes for “The Empire Strikes Back Uncut” now over 1,500, it would have been overwhelming for the Storyscapes audience to think about viewing all of these at the exhibit so Pugh created a video quilt out of 480 handpicked scenes.

“It gives you a sense of the scope of the project when you see them all on the wall at once, and I like how anyone can participate physically by using the iPad interface to explore the scenes by category, or just what strikes them visually,” he said.

Pugh also added that one advantage of showing the work in a physical space is the dedicated computer.

“It is difficult to quickly explore hundreds of videos at once through just a standard web browser,” he said. “Sifting through 1.5GB of video with pure fluidity can only be achieved in a physical space with a dedicated powerful computer.”

A Journal of Insomnia

For “A Journal of Insomnia,” Bruno Choinière and Guillaume Braun believe the gallery space is an extension of the web experience.

“People who get in our installation are invited to talk about and confess their insomnia through different questions,” Choinière said. “They can answer in two different ways, one being drawing and the other being writing. While they are doing this, people outside the installation can see their answers. The online experience also showcases these answers on the web.”

There is a metaphorical aspect to this design, explained Braun: “The installation represents the solitary state inside the box and the social aspect of the insomnia outside.”

Choinière added: “The whole installation was prepared for Storyscapes, but we created it so that it can travel and be easily installed to send across the world. Since it is an extension of the whole project, we still have a very strong digital approach even if it is, at the end of the day, a physical installation. We wanted to merge both worlds and make sure there is no difference or missing link between the two iterations of the project.”

A Journal Of Insomnia | Installation from National Film Board of Canada on Vimeo.

Braun draws a parallel between creating the project for Storyscapes and cross-platform storytelling in general.

“Creating an installation is mainly the same thing as creating for multiple platforms. You think around the purpose of each platform and create or adapt your concept to it; iPhone, tablet, computer or even a physical installation, it’s just another platform, and we just need to think and create always having this in mind,” he said.

He notes that the main advantage to the physical installation is that they were able to create a “rich and profound experience that users can live, touch, interact, hear, smell, etc. It’s a way of having a very interesting connection with our audience.”

Reben of “Robots in Residence.”

For Alexander Reben of “Robots in Residence“ his project is all about the physical experience. “Robots in Residence” began as his thesis project at the MIT Media Lab with a robot named Boxie. He created Boxie to study human-robot symbiosis. He gives this example of what “human-robot symbiosis is all about: “It is hard for a robot to get up stairs, but by being cute (the robot) and asking a person to help the robot, it can get up those stairs by forming a symbiosis with a person and leveraging their legs.”

Reben partnered with Brent Hoff to help with the filmmaking aspect of the project after he discovered just how powerful the human-robot relationship could be.

“Boxie also had a camera and asked questions, and I was surprised by the things people would tell it, especially strangers from the street,” he said.

During Storyscapes, one robot even recorded a woman attempting to steal a police car.

Reben emphasized that the human/robot experience can become very introspective as well.

“Many (participants) have described it as ‘zen’ and ‘thought-provoking.’ The online experience is just the project of this (physical experience),” he said.

Reben hopes more people will be able to have their very own robot and share their experiences on social networks to further the experiment/project.

For all the creators participating in Storyscapes, the interactivity with their live audience was the highlight of their experience at the four-day program. Choinière and Braun were impressed by how many people actually climbed inside their installation and shared profound and touching answers or drawings.

“There was always someone inside the confessional constantly. We are really happy that people felt free to share their experience. At some point the person inside the cube became sort of a performer while everyone outside was watching live the answers or the drawings,” Braun said. “The was a sort of consciousness of being watched, but that still didn’t impact on the quality of the answers.”

Profile: Installation Robots in Residence with Alexander Reben and Brent Hoff from Submarine Channel on Vimeo.

When I asked Pugh if he thought the time preparing “Star Wars Uncut” for the film festival was worth it, he responded, “Although it was a bit of a time sink to put together the installation, it was completely worth it. It’s great to introduce people to the project this way who have never seen or heard of it before. So many people feel a connection to the “Star Wars” story even if they don’t describe themselves as a die-hard fan. We got reactions that ranged from nostalgia, awe at the originality, laughter at the jokes, love for the kid actors, or admiration for fellow filmmakers. We don’t get to see those reactions in person usually, so that was definitely a plus in this space.”

Gottesdiener and Falcone both said they felt especially honored to participate since this was the inaugural year of the program and they could immerse themselves in the film festival experience.

“We expected to learn new models about how to create interactive platforms and how to translate those to physical spaces, and the four other participating projects and featured speakers certainly fulfilled that expectation,” Gottesdiener said.

Asked if he would recommend that other cross-platform storytellers participate in a film festival in this capacity, Reben answered: “I would say it depends on the project and what venue makes sense. Since transmedia is so broad, it would be hard to make a sweeping recommendation. Some projects may live best just online.”

“A Journal of Insomnia” creators also emphasized that for each project it is different.

“It’s more around a case-by-case situation because if you create something just for doing it without linking it enough to the concept, the experience would fall short,” Choinière said. “We don’t think that there is a way of doing things or an instruction on how to make transmedia. It’s project-related, and there is no good way or bad way of doing it; there are millions of ways, and this is why it’s so exciting to create in this field. Get out of your comfort zone would be our main recommendation.“