6 Seconds on Broadway: How Vine Could Revolutionize Theater Promotion 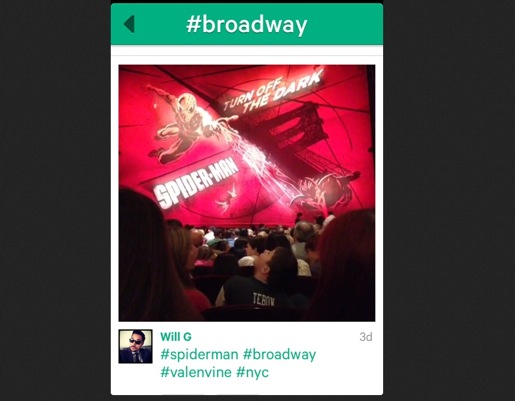 One Vine user shares a pre-show video of "Spider-Man: Turn Off the Dark."

[Broadway] shows are going to realize that what is captured and shared in the theater is more impactful than the shows' multimillion-dollar print campaigns." -Scott Kane

This week Vine hit the No. 1 spot in Apple’s App Store — signaling its meteoric rise.

ADVERTISEMENT
A Vine video taken during a performance of Wicked.

In the theater industry, there are already a sizable number of videos tagged with #broadway and #musical on Vine, including ones from popular shows such as “Wicked,” “The Book of Mormon,” “Spider-Man: Turn Off the Dark,” as well as more recent musicals such as “The Mystery of Edwin Drood” and “Hands on a Hardbody.” From the harmless shots of Playbills and smiling faces before a show to blatant video of sets and scenes — some clear, some fuzzy — it can all be found within the confines of Vine.

While six seconds might not seem like a lot, it’s enough to get those in the theater industry thinking about how it might impact what they do.

For instance, six seconds is enough time to capture a costume, a set, even a quick dance move, resulting in a plethora of intellectual property and trademark violations. But can it cause any harm to the show and those involved?

The real harm is caused by the act of taking the video and thereby disrupting patrons nearby, and not from the video itself, according to Andrew Asnes, Broadway producer and creator of TheaterAdvisor.com, whom I contacted via email.

But, added Asnes, “the danger is that the quality and sound of the footage is usually poor and therefore may misrepresent the [show].”

On the flip side, one could argue that these videos help promote a show, spreading it to a wider audience.

“Any method of social sharing is positive as it exposes the show to more people,” Asnes wrote. “People are relying more and more on word of mouth, not only from close friends but from the general public.”

Scott Kane, chief marketing officer at the Shorenstein Hays Nederlander theaters, agrees: “What is actually captured, whether it’s a photo or video, can only generate more awareness for the show via sharing. And at some point, shows are going to realize that what is captured and shared in the theater is more impactful than the shows’ multimillion-dollar print campaigns.”

Vine is Here to Stay

After all, early signs show that this new app is more than just a fad. According to recent stats by Onavo Insights, Vine has grown its monthly active users by more than 50 percent in just its first two months, while other video-sharing apps like Viddy and SocialCam have experienced a gradual decline month over month. And within that short period of time, Vine managed to capture 2.66 percent (up from 1.77 percent) of the iPhone market share, with a continuous upward trajectory. Plus, Vine has the backing of Twitter giving it automatic credibility, popularity, and millions upon millions of users to tap into.

A Vine user shares a glimpse of the new musical ‘Hands on a Hardbody.’

Unlike YouTube and other social video-sharing tools, Vine’s six-second time limit, in theory, forces the user to be more selective and creative in capturing people’s short attention span, similar to Twitter’s 140-character limit. Vine also allows for the user to combine several clips into a series or larger theme. Combining the platform’s unique features and the fact that it’s new makes it a hip alternative.

And the platform’s creative potential is already being tapped into. The esteemed Tribeca Film Festival, for instance, started a new competition, #6SECFILMS, that tasks filmmakers to submit their best six-second Vine film. Categories for the competition include #GENRE, #AUTEUR, #ANIMATE and #SERIES. According to the Tribeca Film Festival’s website, the winners in each category will receive $600 — a hundred bucks for each second of video.

Big film studios such as 20th Century Fox are already latching onto Vine, too. “The Wolverine” has received a lot of media attention recently for creating a Vine with several clips as a lead-up or “teaser” to the trailer of the film. As The Huffington Post put it, the Vine video was “putting the tease in teaser.”

So perhaps the theater industry should take a cue from Tribeca and “The Wolverine.” Or as Asnes suggested, even the Grateful Dead. Include a “tapers” section for Vine users, wrote Asnes, allowing patrons to take video during the show. “There would have to be quite a lot of controls in place but I believe it would open up the ways people would share their passion and enthusiasm for a show.”

Amanda Bohan is the founder of Amanda Bohan Marketing, a social media and digital strategy company that works with arts & entertainment clients, as well as a variety of start-ups. Previously, Amanda was part of the social media leadership team at MEC where she created effective social strategy for top brands. She was also part of the social media team at Situation Interactive, where she worked on a variety of entertainment clients. Follow her on Twitter at @amandabohan.

Daniel Vahab is a freelance writer as well as a marketing and public relations professional. Vahab’s writing has appeared in such major publications as Mashable, Yahoo! News, The New York Times, The Huffington Post, U.S. News & World Report, LinkedIn Today, The Baltimore Sun, The Jerusalem Post, the Sun-Sentinel, Social Media Monthly, and the Jewish Daily Forward, among others.