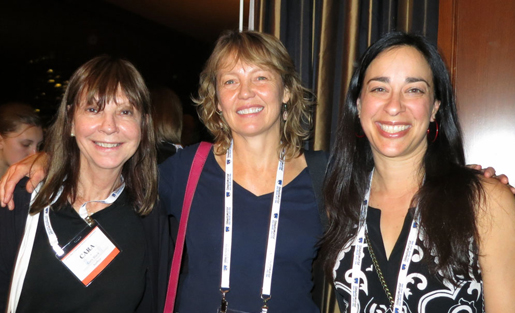 Carla King (center) at the SF Writers Conference this past February, with mystery writer Cara Black at left and romance writer Bella Andre at right. Photo by Meg Waite Clayton.

The San Francisco Writers Conference has always been strong on self-publishing, and this year the conference fully embraced the topic by inviting Guy Kawasaki to keynote. The Silicon Valley venture capitalist and former chief evangelist of Apple has written a new book: “APE: Author, Publisher, Entrepreneur-How to Publish Your Book.” This new how-to guide came from his experience publishing 10 books, creating “beta” readers, and working with editors, Silicon Valley-style.

If this conference taught authors anything, it taught them about publishing options. This year, the wall between traditional and self-publishing is visibly crumbling."

Kawasaki’s trademark smile and upbeat message, along with amusing anecdotes and self-deprecating manner, charmed the 500-plus participants, many of whom still dream of winning an agent and traditional publishing deal. Therefore, his best laugh came when he told the audience that there are two kinds of authors: the authors who admit they want a traditional publishing deal … and the ones who are lying.

>>>> RELATED: Guy Kawasaki discusses his book and self-publishing on The Mediatwits podcast <<<<

If this conference taught authors anything, it taught them about publishing options. This year, the wall between traditional and self-publishing is visibly crumbling. At the presenters party, Smashwords founder Mark Coker introduced me to romance writer Bella Andre, who in October 2012 negotiated a ground-breaking print-only deal with Harlequin that allows her to keep the e-book rights.

One can only hope that other traditional publishers will loosen their “all rights” policies and follow suit. Andre is a New York Times bestseller and digital phenomenon. “When I considered publishing my e-books in print format, Harlequin was naturally my first choice. I am beyond thrilled,” she said. But her books on Smashwords and Kindle stay put.

A former Silicon Valley publicist, McLean has been on the cutting edge of publishing and technology from the beginning. As a member of the management team for the San Francisco Writers Conference she’s been instrumental in creating the right balance of publishing and craft for writers attending.

I spoke with longtime self-publishing guru Dan Poynter to get his opinion on what’s new and important in the self-publishing tools and techniques, and what writers need to know. Surprisingly, he told me the biggest mistake writers make is to ask “How do I sell this thing,” after the book is finished. By then it’s too late, he told me. They should have asked a different question entirely, and much earlier in the process. That is, how do I slant my book to attract readers? Hear more about how to succeed by employing this advance marketing research in my talk with him:

Brian Felsen is the president of CD Baby, which also runs BookBaby, FilmBaby, and HostBaby. We talked about pain points for authors, such as being overwhelmed about technology and how much there is to learn. Then we had a fun discussion about how fiction and nonfiction writers may differ in their marketing approaches, as noted by keynote speaker Kawasaki who said you should market before you even start writing your book, and the other keynote speaker, Andre, who said the opposite: Don’t spend time marketing, just start writing your next book.

We also had a great conversation about traditional publishing’s role in curating content becoming replaced by crowdsourced curation. Can the “wisdom of the crowds” possibly do as good a job at identifying the truly great books and authors?

Next I talked with science writer and novelist Ransom Stephens, who spoke at the conference on writing, publishing, and marketing. For some years I’ve watched Stephens’ publishing trajectory move through several phases — from self-published author to working with a small press, and now he has a new deal with 47 North, an Amazon imprint for science fiction, fantasy, and horror.

Here, Stephens talks specifically about how to build a fan base using social media tools and traditional promotion techniques:

When I mentioned Felsen’s concern that the demise of traditional publishing may affect curation negatively — by rising the popular (pulp) books to the top instead of the genius writers — Stephens took the opposite opinion to support beta testing and curation, Silicon Valley-style:

Just over a year ago Scott Andrew James attended my Self-Publishing Boot Camp workshop and since then he has not only published his book, but founded the RedHat project that helps authors with social media and platform building. He’s strong on marketing and crowdsourced funding, and he told the audience how Kickstarter, Indiegogo, and Pubslush can really help authors build a platform, raise money, and have a lot of fun while they’re writing their books.

Finally, I talked with author Michael Daugherty, who also attended a Self-Publishing Boot Camp last year, who has finished his nonfiction thriller “The Devil Inside the Beltway.” Here, he describes his immersive, year-long self-publishing journey:

From 2008 and 2012 the San Francisco Writers Conference has been very strong in self-publishing content. Listen to my 2012 interviews with Laurie McLean, Kevin Smoker, Patrick Von Wiengandt, and Joel Friedlander — describing how technology and self-publishing have changed the conference over the years.

Get the Conference on Disc or MP3

Each year the conference sessions are recorded, and you can get just the sessions you want or the entire conference on MP3 or a CD. Order here.