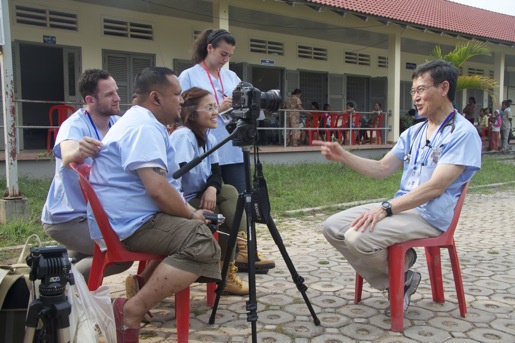 In a rural province of Cambodia, a broadcast journalism student from California State University, Fullerton prepares a news report about an American medical missionary group that’s come to the village to provide medical and dental treatment. But the student, Joseph McHale, doesn’t just stand in front of the camera offering a dispassionate, objective account of the medical mission. Part of his report includes footage of him actually assisting a visiting dentist with a bloody tooth extraction.

“As you can see, I’m here with Dr. Franklin Young, who trusted me to be his dental assistant for the last few days,” McHale, dressed in scrubs, a surgical mask and blue latex gloves, says to the camera as he leans over the patient having a tooth pulled.

When students go on these humanitarian missions they're taken out of their comfort zone and placed in some of the poorest parts of the world." -Jeffrey Brody
ADVERTISEMENT

California State University, Fullerton student Joe McHale does a stand-up for a news report in Cambodia; a land-mine victim stands behind him. Photo courtesy of Jeffrey Brody.

As globalization becomes an increasingly important part of modern life, American journalism schools are launching study-abroad programs in ever more remote and exotic destinations with an eye on training the next generation of foreign correspondents. In some of these programs, students don’t merely report on the communities they visit; they provide service to the local community even as they cover issues of poverty, inadequate health care and human rights.

Some might say these students are crossing the long-established journalistic line between reporting and helping, that they are losing the distance and impartiality journalists need to do their work properly.

But others say that by helping, by getting involved, they are actually learning to be better journalists.

“I think it’s important for journalists to have compassion,” says Jeffrey Brody, a professor of communications at California State University, Fullerton, who has led groups of students, including McHale, on medical missions to Southeast Asia for the past three years. The students spend part of their time helping the medical workers, part producing promotional materials for the mission, and the rest doing journalism.

“When students go on these humanitarian missions they’re taken out of their comfort zone and placed in some of the poorest parts of the world,” Brody says. “They share in the suffering of others. That makes them better journalists and better citizens.”

Brody, who covered Southeast Asian immigrant communities as a reporter for the Orange County Register in the 1980s and continued to report on them after he became an academic, first came up with the idea of taking journalism and communication students on medical missions after hearing about Project Vietnam, a Southern California-based nonprofit program that sends teams of health care workers to help poor, rural communities in Vietnam. In 2010 Brody arranged for a group of a dozen journalism students to accompany the health care workers on one of their regular missions. In 2011, he took a second group to Vietnam, and in 2012 he arranged for his students to travel to Cambodia with the Cambodian Health Professionals Association of America.

Brody’s students have to prepare themselves for rugged conditions and potentially serious health threats. They must get immunizations against exotic diseases and take drugs to ward off malaria. The students sleep in primitive lodging and eat the local food, which can include pigs’ snouts, frogs and tarantulas.

Many of the students’ reports from Southeast Asia focus on the lasting effects of the Vietnam War and the genocide by the Khmer Rouge — people who were blinded or had limbs blown off by landmines, uprooted families that still live like refugees. Others focus on the problems of today — poor sanitation, polluted waterways, inadequate health care, crushing poverty.

While the students get to cover stories they could never report on in the United States, the most profound part of the program is often the service component, where they become a part of the medical relief efforts.

“I would have never thought in my wildest dreams that when I volunteered to lend a hand to the doctors and dentists of the CHPAA mission that I would end up with a suction tube in one hand and a sprayer in the other,” McHale, who graduated in 2012, wrote in a blog post about his experience. “Overall, the experience I had with Dr. Young and CHPAA was amazing.”

Erna Smith, a professor of professional practice at the USC Annenberg School for Communication and Journalism, has brought groups of journalism graduate students to Cape Town, South Africa for the past five years. While there, students do internships at local media organizations and report on the community. In addition, they travel to the township of Paarl, 40 miles northeast of Cape Town, to organize media training workshops for local youth.

“We ask the youth to come up with story ideas and my students coach them through using the equipment,” Smith says, explaining that USC provides flip cams and digital audio recorders. “These workshops have been the strongest part of the Cape Town program. They always get the highest reviews from my students.”

Smith says the media-training program provides the South African youth with a vehicle to tell the stories of their people. They report on gangs, teen pregnancy, the local economy, and traditional tribesmen who have moved to the more developed Paarl area in search of jobs and a better life. And by helping the local youth tell these stories, the American students are enriched.

“A lot of what makes these international programs great is not the techniques and skills the students learn — that’s a given — but it’s what happens to their character and their outlook on life,” Smith says. “When you’re a journalist, you need to understand the world is not just your world; you have to understand the larger world around you.”

Smith says the trip to South Africa changes her students. “Anyone I’ve taken there is different when they come back. Many are profoundly changed. They see where they are in this world of haves and have-nots. They really get that by the time they leave.”

The biggest learning occurs when they get back home, Smith says. “They start asking themselves questions. They really begin to think about how they’re consuming things, how much stuff they consume. There is this deflation, this existential ennui when they come back and see the superficiality of this culture. It smacks them in the face.”

“I have a grad student writing a paper on whether media is a piece of international development. I argue it is. It’s not like working in a hospital or putting in a water well, but as far as I’m concerned what we do is important. By training reporters we’re helping to develop a free press.”

Stucky says her teams of American and Moroccan journalism students often report stories that would otherwise go untold, like the story of women fighting for the right to inherit land or the one about a young lesbian couple risking imprisonment for their hidden relationship.

“I don’t think any of the stories we’ve told would have been reported if we weren’t here,” Stucky says. “It really inspires me what these kids do together.”

Rachele Kanigel is an associate professor of journalism at San Francisco State University, where she advises Golden Gate Xpress, the student newspaper, and teaches reporting, writing and online journalism classes. She was a daily newspaper reporter for 15 years and has freelanced for magazines and websites, including U.S. News and World Report, TIME and Prevention. She directs summer study-abroad programs for ieiMedia for Education in International Media) and is the author of The Student Newspaper Survival Guide. Follow her at @jourprof.