How the Boston Phoenix Kept Its Readers But Lost Its Advertisers 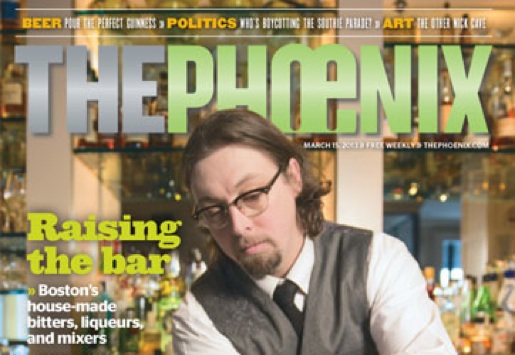 The final issue of the Boston Phoenix.

For the Boston Phoenix, the decline lasted years — but the end came swiftly.

Last Thursday afternoon a local journalist called to ask if I’d heard rumors that the 47-year-old alt-weekly was about to go under. I hadn’t. Within an hour, Boston.com was reporting that the Phoenix would cease publication immediately. One more issue — online only — will be posted this week. After that, the Phoenix, my professional home for 14 years and an important part of my life since the 1970s, will go dark.

It would be smug, facile and wrong to attribute the Phoenix's death to a slide into irrelevance. Rather, what did in the Phoenix was the decline of community."

It was a shock, but it wasn’t a surprise. Last fall, publisher and founder Stephen Mindich took an enormous gamble, converting the Phoenix into a glossy magazine in the hopes of attracting high-end advertisers that had traditionally disdained the scruffy newspaper.

The national advertising he had been counting on failed to materialize, though. In the last few months the publication was shedding pages and hemorrhaging money. Still, I’m told that the day before Mindich’s announcement, staff members held a long meeting to plan future issues.

Although the Phoenix now stands as an extreme example, its demise may presage the beginning of the end for the alternative press, a lumbering dinosaur in an era when — as Reuters media critic Jack Shafer notes — people looking to kill time are far more likely to pull out their smartphone than go looking for anything in print.

Still, it would be smug, facile and wrong to attribute the Phoenix’s death to a slide into irrelevance. Its print circulation of more than 100,000 was roughly what it had always been. Its journalism, on subjects ranging from the media’s complicity in climate change to Mitt Romney’s binders-full-of-women deceit to a bizarre tale of strife and intrigue on the Breitbartian right, was as strong as ever. Rather, what did in the Phoenix was the decline of community. That is, of a certain kind of community — local businesses — that had supported it financially for many years, but that by the end had almost entirely ceased to exist.

The Phoenix and I go back a long way. In the early 1970s, as a high school student in a rural community an hour from Boston, I read the city’s alt-weeklies eagerly, absorbing their left-leaning politics and discovering music ranging from Bruce Springsteen to the Mahavishnu Orchestra, Miles Davis and Carla Bley.

Yet it was many years before I asked the Phoenix for a job. After a decade in community journalism, I left to start a regional news-and-lifestyle magazine, a venture that ended the way such ventures usually do. At 34, expecting our first child, I was kicking around, doing layout and production for the local Catholic paper, when a copy editor’s job at the Phoenix opened up. I took it, and started in early 1991. I stayed until 2005, spending most of those years as the paper’s media columnist.

Some wonderful remembrances have been written by Phoenix alumni in the past week, including those by Susan Orlean of the New Yorker and Esquire’s Charles Pierce in Grantland. The Phoenix’s last editor, Carly Carioli, wrote a poignant sign-off, and Al Giordano has promised what’s sure to be a must-read for his Mexico-based news site, the Narco News Bulletin.

Here’s how I would put it: I was at the Phoenix for its last great flowering. With the 1960s and ’70s a fading memory, editor Peter Kadzis reimagined the alt-weekly as a hipper version of a city magazine. Politics and music remained staples, but so did a more encompassing vision of Boston aimed at readers for whom Woodstock and Vietnam were barely a rumor.

A vintage Phoenix ad that’s been circulating among Phoenix alums.

In 1994 Lloyd Schwartz won the Pulitzer Prize for Criticism for his classical-music coverage. In 2001 Kristen Lombardi wrote a series of reports on the Catholic Church’s pedophile-priest scandal, months before the Boston Globe began publishing its Pulitzer-winning work. And though no one was overpaid, money was no object if the story was deemed worth doing. Ellen Barry, who now covers Russia for the New York Times, was dispatched to Moscow for Boris Yeltsin’s 1996 re-election campaign. I covered three national political conventions, not counting the one in Boston in 2004. In 2000, I got a chance to chase the media horde pursuing John McCain and George W. Bush across South Carolina.

Those glory days would soon end.

In 2002 I took a year’s leave to write a book. When I came back, shrinkage had set in. By the time I left for good, it was clear that the flush times were over. What no one could imagine was that, in less than a decade, the Phoenix would be gone altogether.

From Green to Red

So what happened? Some of it is pretty obvious. About a dozen years ago the Phoenix switched from paid to free distribution, which might have made sense at the time but which proved disastrous given the advertising collapse that was to come.

Craigslist, of course, had a devastating effect on a paper that depended on pages and pages of classified ads — college students looking for roommates, bands looking for musicians and, yes, people from all walks of life looking for sex. National advertising from cigarette companies and record labels dried up.

But beyond those factors, the community that sustained the Phoenix has passed from the scene. At one time the Boston area was awash in concert venues, record stores, guitar emporiums, independent book stores, head shops — the kinds of businesses that reached their customers by advertising in alternative weeklies. Now they are almost entirely gone. There was very little to offset the costs of producing a free magazine and a free website. It’s no wonder that Mindich personally had to subsidize the Phoenix to the tune of $30,000 a week, according to a report in Boston magazine.

On the surface, it might seem odd that Mindich will continue to publish the Portland (Maine) Phoenix and the Providence Phoenix, much thinner alt-weeklies that are still printed on newspaper stock. Yet many smaller cities have maintained the sort of community that can sustain such papers. Indeed, Tiffany Shackelford, the executive director of the Association of Alternative Newsmedia, told the website NetNewsCheck that the relative health of the Portland and Providence papers reflects broader trends.

“We’re seeing that alt-weeklies are still really thriving in small to medium markets where they’re an important voice for their community,” she said. “In larger markets, there’s more competition for advertising.”

With the Internet taking away the Phoenix’s classified-ad revenue and with the passing of its traditional base of display advertising, Mindich really had no choice other than to try something completely different.

It failed, but it was a noble failure. Sadly, some 50 people are losing their jobs. I’ve lost a touchstone that had been an important part of my life for the past 40 years. And Boston has lost an intelligent, vital, irreplaceable voice.

Dan Kennedy is an assistant professor of journalism at Northeastern University in Boston and a panelist on “Beat the Press” a weekly media program on WGBH-TV. His blog, Media Nation, is online at www.dankennedy.net. His book on the New Haven Independent and other community news sites, The Wired City, will be published by University of Massachusetts Press in May 2013.