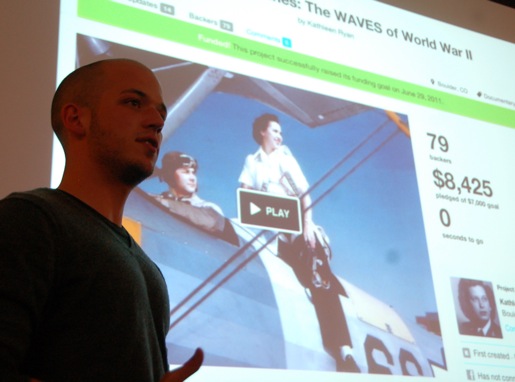 This piece is co-authored by Justin Runquist. Both Kaitlin Gillepsie and Runquist are with the Murrow News Service.

Facebook managing editor Dan Fletcher announced Wednesday that he will be leaving the social media giant next month.

"You guys are the reporters. There is no more engaging content Facebook could produce than you talking to your family and friends." -Dan Fletcher.

Speaking before a crowded audience at the Edward R. Murrow College of Communication at Washington State University in Pullman, Wash., the 25-year-old Fletcher said he will be pursuing his own online startup.

“I’m leaving Facebook in the middle of April because I’m so excited about these other models,” Fletcher said. “I think largely, Facebook is a really good force in our society, but there’s other stories I want to tell, too.”

Fletcher joined Facebook in January 2012 in a move that sparked speculation that the company may move into the news business. Fletcher, former social media director for Bloomberg News, helped create FacebookStories, which produced “branded journalism” for the company. FacebookStories was designed to share the experiences of “people using Facebook in extraordinary ways,” according to the site. Those stories were translated into 16 languages for users around the world.

“I think the biggest mistake they made in bringing me on is this title,” he said, referring to the managing editor title for Facebook. It was misleading, he said.

The company “doesn’t need reporters,” Fletcher said, because it has a billion members who can provide content.

“You guys are the reporters,” Fletcher told the audience. “There is no more engaging content Facebook could produce than you talking to your family and friends.”

Branded journalism has been adopted by numerous other companies in the past year. At Facebook, it can seem “weird” for the company to address its users through branded stories, Fletcher said.

Fletcher praised the work of several startups, including 29.io, Matter Magazine, The Atavist and Kindle Singles, content providers that sell stories online or on mobile devices. Fletcher said he is excited about the prospects for long-form, in-depth journalism on the Internet — and he disputed the idea that online journalism should be free.

A graduate of Northwestern University, Fletcher worked for Time magazine after graduating. He wrote a Time cover story titled “How Facebook Is Redefining Privacy” in May 2010 as the social network prepared to reveal modified privacy controls.

“Facebook makes us smile, shudder, squeeze into photographs so we can see ourselves online later, fret when no one responds to our witty remarks, snicker over who got fat after high school, pause during weddings to update our relationship status to Married or codify a breakup by setting our status back to Single,” Fletcher wrote in that piece.

“As a reporter at the time, Facebook was growing so, so fast,” Fletcher said. “I don’t think they understood how fast they were growing.”

When asked whether his views of Facebook had changed during his 15 months with the company, Fletcher laughed.

Fletcher revealed few details about his next project.

“I wish I could end this with, ‘here’s what I’m going to go do,’” Fletcher said. “That would certainly be helpful for me. But I’m not there yet.”

Justin Runquist and Kaitlin Gillepsie contribute to the Murrow News Service, which provides local, regional and statewide stories reported and written by journalism students at the Edward R. Murrow College of Communication at Washington State University.