4 Questions for Andy Carvin on Being a Social Media DJ 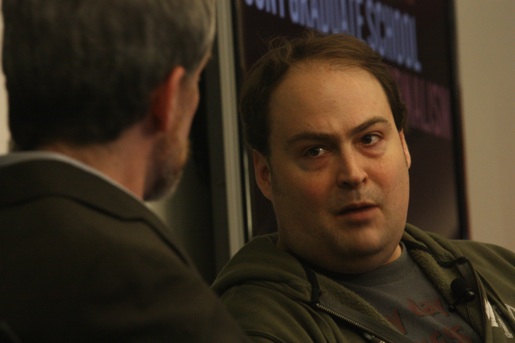 Andy Carvin is the “war reporter who never attended the war.” And indeed, NPR’s senior social media strategist came to the attention of the journalism and wider world in a unique fashion during the Arab Spring, tweeting virtually around the clock while monitoring half a dozen revolutions in the region — all from his perch in Washington.

While Carvin’s background is not strictly in journalism, but rather in online community organizing, he has been described as a new kind of journalist — a news DJ, a digital media anchor. He himself says he is a “real-time open-source oral historian.”

I think that there is going to be a role for reporters, producers, editors that spend an above average amount of their time focusing on social to complement what is happening offline."

The labels tell of the shifting definition of journalism today. And Carvin, who in January published an account of his experience titled “Distant Witness — Social Media, the Arab Spring, and a Journalism Revolution“ (CUNY Journalism Press, January 2013), has been making the rounds to tell his story, and what it foretells for journalism’s future.

Carvin sat down with me in February for an interview at the CUNY Graduate School of Journalism in New York. An abbreviated transcript appears below. You can watch a video of the full Q&A here:

1. So much has been said about not only the Arab Spring itself, but about what you did in covering it. If there is a single takeaway that you are now applying to the work that you are doing today, what would that be?

Andy Carvin: I would say if you put the effort into cultivating a community of people that aren’t just an audience for you, but are people that feel that they have a vested interest in your success, and also have certain skills that can assist you in that success, you go from having an audience to an army. My Twitter followers act as my translators, my researchers. They know pretty much every dialect in North Africa and the Middle East so they can tell the difference when a video is from the Middle East or Northern Syria.

Carvin: In general, using social media and online communities to improve your reporting falls into two categories. One, if you have a critical mass of eyewitnesses — that could be protest, an earthquake or something much smaller scale, but witnesses nevertheless — or subject matter experts. And those don’t need to be people that have PhDs. A lot of them I’ve worked with over the last couple of years, they are students, they are homemakers that happen to know a lot about the local culture, because that’s where they are from. But they are still experts in their own right.

So by having a critical mass of either experts, or eyewitnesses, or both, it allows you to attempt these types of techniques. It takes time to build up these networks via social media. But I try to make the argument when I talk to editors that cultivating sources is cultivating sources. It doesn’t matter if you are doing it offline or online, as long as it is constructive and they have potential value. So ideally you should be doing both.

So the one challenge is building up that source network. And the second one is when there is a story to be covered, that you don’t find yourself in a position where you are being asked to drop all that social media stuff and concentrate on the broadcast or concentrate on what is going out on print. Because if you do that, you are missing this pool of information that could turn out to be very valuable. That doesn’t mean you don’t go out into the streets and do the interviews like you always do. There will always be a role for that. But I think that there is going to be a role for reporters, producers, editors that spend an above average amount of their time focusing on social to complement what is happening offline.

3. What about the school shooting at Sandy Hook? That process of public verification of information not yet known to be true was the source of a lot of criticism.

Carvin: I was using my same techniques. I wouldn’t go out and claim any of these things were true. They almost always contained some kind of question mark asking what other people knew. All of these rumors came from mainstream media. At least, that is where I first saw them, through their official accounts. And much of it didn’t turn out to be true. Now afterwards I got some criticism from a couple of people in the news business saying that I helped propagate rumors and spread them by discussing them, despite the fact that I was questioning them. So they felt it was inappropriate for me to be having that kind of discussion at all publicly, even though other news organizations had run with it publicly.

The philosophical split you are seeing here is people that think anything that is a rumor or not confirmed should be hidden in the deepest depths of the newsroom until it is verified, versus what I do, which is acknowledging that certain things are already out there being discussed by the public, and in many cases by the media, and I ask for additional sourcing. And some people don’t like that.

<< Related: How the #Newtown Tragedy Unfolded on Twitter via Andy Carvin >>

4. Your brother Eric works as a social media editor at the Associated Press. What happened in the Carvin family household that got Eric Carvin and Andy Carvin into social media?

Neither of us have gotten into social media. Both of us have gotten into storytelling. I think if anything my family probably instilled the importance of telling stories, and telling other people’s stories, and not letting those stories fall through the cracks. I think it is one of the reasons that I don’t honestly care if people decide not to call me a journalist or not to call me a reporter. It just doesn’t bother me, because I see ultimately what I am doing as a form of storytelling. And storytelling doesn’t always have to be reporting. And I think that if I am giving the public opportunities to bear witness in new ways, then I have done something good.

A. Adam Glenn is associate professor at the CUNY Graduate School of Journalism, and a longtime digital journalist and media consultant. Connect with him on Facebook or LinkedIn, and follow his Twitter feed.