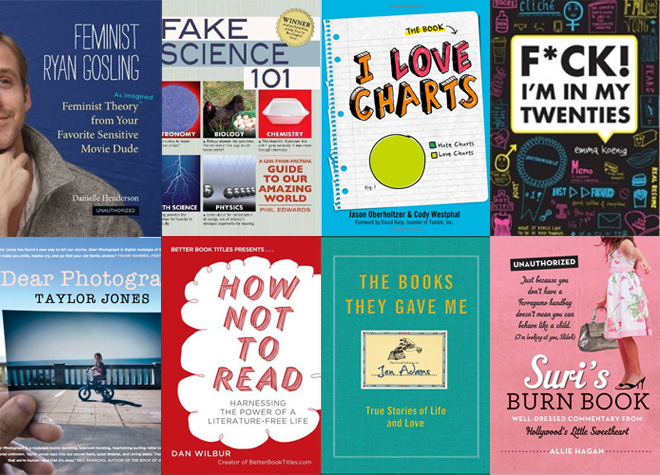 Far from dying down, the Tumblr-to-book trend is strengthening the platform's creative community.

In 2012, multimedia micro-blogging service Tumblr was the hub for not only viral memes, but also creative book deals.

The blog-based book or “blook” is hardly new. Post Secret and Stuff White People Like kicked off the blog-to-book movement in the mid-2000s. Book deals for the Tumblr generation — Garfield Minus Garfield and Hipster Puppies followed suit. Today, the trend is still going strong, showing more variety, depth, and support from Tumblr than ever.

Tumblr gives them a place to put their work and if it's great, we will get it discovered." -Rachel Fershleiser, Tumblr literary community manager

One recent Tumblr-to-book success is Suri’s Burn Book, which plays with the mystique of celebrity children. Allie Hagan, the voice behind the Tumblr and now printed book, didn’t have high expectations when she started the blog. She said via email, “I thought it was a funny idea and that, if I was really lucky, it would be one of those Tumblr blogs that makes everyone laugh for two weeks and then fades away, like bindersfullofwomen.tumblr.com or the amazing textsfromhillary.tumblr.com.” But that hasn’t been the case. Hagan’s average post continues to amass several hundred to more than 1,000 likes and reblogs — Tumblr’s primary measures of engagement.

Hagan said the first obvious step in turning a Tumblr to a book is finding a publisher. Hagan worked with publisher Running Press to develop a specific concept for print. Whereas her Tumblr posts utilize a photo-and-caption format that capitalizes on news of the day, the book aims to impart more “timeless” content through longer chapters.

But where to find a publisher? First of all, get your work out there — which is easy to do on Tumblr because it’s designed to encourage content discovery. “[Tumblr’s] both a blogging platform and a social network, so if you write a post that other people like, all they have to do to share with their readers is hit the reblog button — as opposed to copying the URL and pasting it to Twitter or Facebook or email,” Hagan said. And with a community of more than 80 million blogs, there is already an audience eager to taste new projects everyday.

Tumblr recently amped up talent discovery as well, bringing on board full-time literary community manager Rachel Fershleiser. Fershleiser works in the middle of the platform’s publishing space, often connecting Tumblr authors to publishers. “Sometimes I’ll talk to someone who’s interested in getting a book deal. I’ll give them advice or I’ll take a look at their book proposal. Sometimes I’ll pass something along to an agent,” Fershleiser said in a phone interview. And for those already with book deals, she also provides publicity advice.

This is a book trailer for recent Tumblr-to-book success, “F*ck! I’m In My Twenties.”

When it comes to actually inking a book deal, there is more than one ideal Tumblr mold. According to Fershleiser, sometimes the Tumblrs with book deals are “just a bunch of compelling images” — sort of ready-made books. Others introduce a fresh perspective. Emma Koenig’s F*ck! I’m In My Twenties, for example, chronicles a young woman striving for career, love, and friendship success in the city, which resonated with large audiences within Tumblr and beyond; the print book was released this past August. For the writers who have talent unbeknownst to themselves, or who lack traditional access to publishers, Fershleiser said, “Tumblr gives them a place to put their work and if it’s great, we will get it discovered.”

When Tumblr book deals first trended a few years ago, there were questions about whether Internet diversions should be immortalized in print books at all. This doubt still looms. But far from dying down, the “Tumblr book deal” trend is producing a hierarchy of value. On level one, there is a literal value: Print books allow entertaining online content to be accessed offline, shared as gifts, and kept forever. But level one still raises the same question: Why produce a bunch of attractive coffee-table books — which, in the age of Tumblr, mean quick compilation jobs that merely regurgitate memes? How to capture more than the typical online reader’s “temporary attention” is a problem most Tumblr book authors have to tackle. And if addressed, the Tumblr books achieve a second level of value: content with more staying power and emotional impact. Like Suri’s Burn Book, Tumblr book My Parents Were Awesome also adopted a modified concept when going into print. Whereas the Tumblr is just a collection of photos, the book offers narrative essays about the parents behind each photograph. Similarly, Pitchfork Reviews Reviews started out as a Tumblr about Pitchfork, the online music publication. But in the upcoming print edition, the author will write about his life experiences and observations on culture as well.

title=”The Tumblr Prep book release party connected Tumblr authors to their readers and to each other.” />

Tumblr books’ third level of value has less to do with the format of the content, and everything to do with the liveliness of Tumblr’s creative community. When a Tumblr book is published, the Tumblr staff goes beyond promoting on Twitter. The editorial team may cover the book deal on Storyboard, Tumblr’s editorial arm launched in 2012. Tumblr also organizes community events, such as readings and launch parties. In November, Tumblr hosted Tumblr Prep, a school-themed party that brought together new book authors and the public, a school-pictures photo booth and snacks in brown paper bags. With increased support from Tumblr itself, each new Tumblr book is another opportunity to expand the platform’s creative network and its influence.

Just as Fershleiser connects and creates opportunities for talented writers, the rest of Tumblr’s growing outreach staff does the same for the art, music, gaming industries and more. Tumblr-grown projects can therefore expect a promising cross-platform future, perhaps a stronger Tumblr-to-TV movement. F*ck! I’m In My Twenties and Hollywood Assistants both landed TV scripts in the last year. Fershleiser offered two more observations going forward: “People are using Tumblr to discover these amazing voices and then reimagining what these voices can do in terms of a book, or a TV show, or a radio show, or a web-series. I think it’s going to be less and less about discovering individual projects and more about discovering voices.”