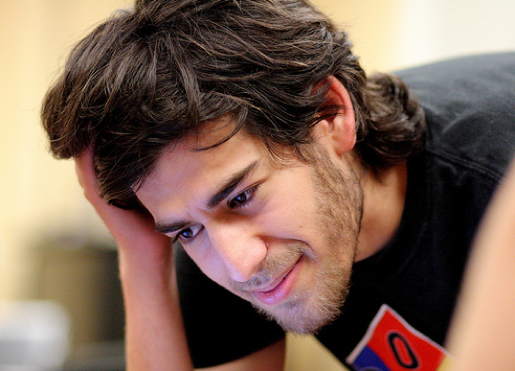 Aaron Swartz in 2009 at a Boston Wikipedia Meetup. Credit: Wikipedia

The following is the opinion of Lawrence Lessig and is a post that first appeared on his personal blog shortly after news broke that Aaron Swartz — activist, writer and Reddit co-founder — had committed suicide.

(Some will say this is not the time. I disagree. This is the time when every mixed emotion needs to find voice.)

Somehow, we need to get beyond the 'I'm right so I'm right to nuke you' ethics that dominates our time."

Since his arrest in January 2011, I have known more about the events that began this spiral than I have wanted to know. Aaron consulted me as a friend and lawyer. He shared with me what went down and why, and I worked with him to get help. When my obligations to Harvard created a conflict that made it impossible for me to continue as a lawyer, I continued as a friend. Not a good enough friend, no doubt, but nothing was going to draw that friendship into doubt.

The billions of snippets of sadness and bewilderment spinning across the Net confirm who this amazing boy was to all of us. But as I’ve read these aches, there’s one strain I wish we could resist:

No doubt it is a certain crazy that brings a person as loved as Aaron was loved (and he was surrounded in NY by people who loved him) to do what Aaron did. It angers me that he did what he did. But if we’re going to learn from this, we can’t let slide what brought him here.

First, of course, Aaron brought Aaron here. As I said when I wrote about the case (when obligations required I say something publicly), if what the government alleged was true — and I say “if” because I am not revealing what Aaron said to me then — then what he did was wrong. And if not legally wrong, then at least morally wrong. The causes that Aaron fought for are my causes too. But as much as I respect those who disagree with me about this, these means are not mine.

But all this shows is that if the government proved its case, some punishment was appropriate. So what was that appropriate punishment? Was Aaron a terrorist? Or a cracker trying to profit from stolen goods? Or was this something completely different?

Early on, and to its great credit, JSTOR figured “appropriate” out: They declined to pursue their own action against Aaron, and they asked the government to drop its. MIT, to its great shame, was not as clear, and so the prosecutor had the excuse he needed to continue his war against the “criminal” who we who loved him knew as Aaron.

Here is where we need a better sense of justice, and shame. For the outrageousness in this story is not just Aaron. It is also the absurdity of the prosecutor’s behavior. From the beginning, the government worked as hard as it could to characterize what Aaron did in the most extreme and absurd way. The “property” Aaron had “stolen,” we were told, was worth “millions of dollars” — with the hint, and then the suggestion, that his aim must have been to profit from his crime. But anyone who says that there is money to be made in a stash of ACADEMIC ARTICLES is either an idiot or a liar. It was clear what this was not, yet our government continued to push as if it had caught the 9/11 terrorists red-handed.

Working for the Public Good

Aaron had literally done nothing in his life “to make money.” He was fortunate Reddit turned out as it did, but from his work building the RSS standard, to his work architecting Creative Commons, to his work liberating public records, to his work building a free public library, to his work supporting Change Congress/FixCongressFirst/Rootstrikers, and then Demand Progress, Aaron was always and only working for (at least his conception of) the public good. He was brilliant, and funny. A kid genius. A soul, a conscience, the source of a question I have asked myself a million times: What would Aaron think? That person is gone today, driven to the edge by what a decent society would only call bullying. I get wrong. But I also get proportionality. And if you don’t get both, you don’t deserve to have the power of the United States government behind you.

For remember, we live in a world where the architects of the financial crisis regularly dine at the White House — and where even those brought to “justice” never even have to admit any wrongdoing, let alone be labeled “felons.”

In that world, the question this government needs to answer is why it was so necessary that Aaron Swartz be labeled a “felon.” For in the 18 months of negotiations, that was what he was not willing to accept, and so that was the reason he was facing a million dollar trial in April — his wealth bled dry, yet unable to appeal openly to us for the financial help he needed to fund his defense, at least without risking the ire of a district court judge. And so as wrong and misguided and f***ing sad as this is, I get how the prospect of this fight, defenseless, made it make sense to this brilliant but troubled boy to end it.

Fifty years in jail, charges our government. Somehow, we need to get beyond the “I’m right so I’m right to nuke you” ethics that dominates our time. That begins with one word: Shame.

One word, and endless tears.

Lawrence Lessig is director of the Edmond J. Safra Center for Ethics at Harvard University and the Roy L. Furman Professor of Law at Harvard Law School. Lessig is a founding board member of Creative Commons and the founder of Rootstrikers, and is on the board of MapLight. He is on the advisory boards of the Sunlight Foundation and Americans Elect. Previously, he was a professor of law at Stanford Law School and founder of the Center for Internet and Society.

NY Times: Aaron Swartz: A Data Crusader, a Defendand and Now, a Cause