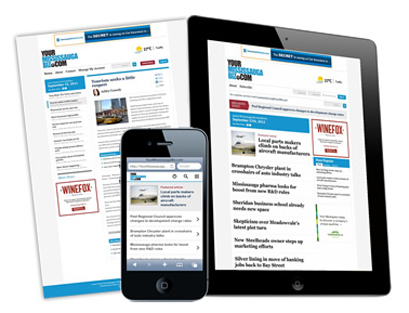 Canada’s largest newspaper company is launching two hyper-local business sites in a bid to duplicate the success of one of Canada’s only profitable online news operations.

YourMississaugaBiz.com launched several months ago, and YourHamiltonBiz.com will go live this month. Both are the creation of Torstar Inc., which owns the Toronto Star, Metroland, and Metro newspapers. The industry has been shedding jobs and centralizing operations, but Torstar executives are betting local business people will pay to read about each other.

The industry has been shedding jobs and centralizing operations, but Torstar executives are betting local business people will pay to read about each other."

“Business news has been more sort of leading edge because I think the information is more valuable to the audience,” said Bruce Leslie, publisher and editor of YourMississaugaBiz. “If we can do stories on a company’s competitors or business environment, public policy that affects business, then that becomes important to them and it becomes valuable and they’re willing to pay.”

The sites seem to be modeled on AllNovaScotia.com, a Halifax-based business site that launched in 2001 with a hard pay wall and a subscription price of $20 a month. The site was profitable immediately, and today generates roughly $2 million in revenues a year and employs 11 full-time journalists. Former managing editor of AllNovaScotia Kevin Cox seems skeptical of the Torstar experiments.

“They’re doing it all at once, they’re hiring all their staff and saying: We’re just going to put this thing out,” he said. “There seems to be this belief that they can just boilerplate it, and I’ll be really interested in seeing if they can.”

AllNovaScotia, YourMississaugaBiz, and YourHamiltonBiz all produce (or will produce, in the latter’s case) in-depth, original, focused stories for a targeted audience in a specific community. The articles can only be read with a paid subscription, and each subscription can be accessed by up to three people. The layout for the websites are simple, with minimal pictures and little to no advertising. A staff produces 8-15 articles every weekday. The content is what drives the readership.

“Our model will live and die by the quality of our journalism: We have no other revenue stream to pick us up. We have to produce content that people see as valuable to their business,” said Mark Cripps, publisher and editor of YourHamiltonBiz. “So we’re going to be responsible as journalists for this model.”

The subscriptions cost $9 per week each for YourMississaugaBiz and YourHamiltonBiz, while AllNovaScotia now charges $30 a month.

The organizations differ in their approach to hiring the news team. The initial YourMississaugaBiz team of six started work a week before the first publication. YourHamiltonBiz’s newsroom will be staffed with “mainly a lot of younger journalists” rather than veteran reporters, Cripps said, because “often experience comes with attitude and an idea of how things should be done.” He said he’s looking for people who appreciate the business model and have an understanding that ambition and hard work will lead to the company’s success.

Cox said while he has faith in a lot of the managers running the sites, he doesn’t think a new team can be brought into a city and know enough about it to write in-depth about it. “You need to have people who know what they’re talking about and who are trusted,” he said. “We kept an eye out for people that we were interested in.” The Halifax Herald had a buyout, and AllNovaScotia swooped in to pick up municipal affairs reporter Amy Pugsley Fraser. When the Daily News went down, Parliamentary reporter Brian Flinn was hired. “If you’re going to write for a specialized audience you have to know your specialty.”

Niche journalism for a niche audience

The model calls for specialized journalism to attract certain readers. “Uber-niche” sites behind a pay model, such as Embassy, PoliticoPro, and The Daily Oil Bulletin, target readers who have a more vested interest in the subject. These business startups, however, go a step further in narrowing the audience to one geographic community.

The content on YourMississaugaBiz compared with the Toronto Star’s business section for example, will be quite different due to the focus on Mississauga businesses, Leslie said. And according to Cripps, that focus is extremely important. “The idea is that this is business news for Hamilton, for this community,” he said. “That’s the model, is that it has to be hyper-local to be successful.”

A greater attention to detail is also needed to be successful, Cox said. Business people know more about the field than reporters in a lot of cases. “If you’re writing about a property development story, most of the developers reading it, he or she knows exactly how a building goes up and what the hoops are that you have to jump through. So you better be right. You can’t guess; there’s no guesswork.”

With 50,000 businesses in Mississauga and a market of 1.3 million people when nearby Brampton and Oakville are factored in, Leslie is reluctant to call his audience a niche. “It’s a substantial market — it just hasn’t had a daily news operation.”

Hamilton is known for its steel industry, but health care is the biggest employer in the area, Cripps said. Its population is about 520,000 people — closer to 700,000 in the Census Metropolitan Area — which is a good size, Cripps said. “The good thing about Hamilton, which is really exciting, is Hamilton has a real sense of community.”

Cripps and Managing Editor Roger Gillespie have a combined 35 years of media experience in the area, and Cripps said he thinks their reputation and contacts will help build buzz around YourHamiltonBiz. Word-of-mouth is mostly how AllNovaScotia became known, said Cox. In addition, a try-before-you-buy mentality is in place at both Star Media entities. Thirty-day trial subscriptions are offered in hopes that those who sign up will be converted to paid subscribers. In the early days at AllNovaScotia, a month-long free subscription was offered only to interviewees so that they could see the published article.

“We’ll definitely make significant investment on the marketing side,” Cripps said. And if it follows YourMississaugaBiz’s strategy, that will include sponsorships, promotions with the board of trade, attending events, a direct mail campaign, an email campaign, and social media outreach.

Something unorthodox in AllNovaScotia’s marketing was that reporters actually sold subscriptions. “People were very critical of us at first,” Cox said. “And I said, ‘big deal.’ I said, ‘I put it out; don’t I think its worth something?’ Of course I do.” The only time YourMississaugaBiz reporters do something like that is when they ask the subjects of the story if they would like to see what’s published, Leslie said.

Long-term sustainability and adapting the model to other areas

Cox said the key to viability is to make the product worth the customer’s while, and that business journalism works because it relies on corporate budgets. However, he said he would have preferred independent operations across the country rather than corporations like Torstar moving in. “If people’s goals are too grandiose, if they’re pushed by the … accounting department to come up with results; to come up with growth; to come up with subscription numbers, you don’t have the chance to have that organic growth,” he said.

But it seems that organic growth is still part of Torstar’s plans. “This is a bold venture into a new way of delivering information, so you can’t really look at any benchmarks to sort of guide you,” Cripps said. “You’re kind of developing it as you go along, which is really exciting as well.”

As for using the blueprint for other topics, arts is out of the question, Cox said. “There isn’t any money there. Artists may want to read about each other, but they’re not going to pay $28 or $30 a month to do it.” But if the model of having a dedicated team covering local, specialized news is successful, Cripps said he sees it expanding into a lot of other streams over time.

“Star Media is making a significant investment in these projects,” Cripps said. “Any time I see an investment in journalism, it makes me a very happy person as a journalist because I think we’ve seen a lot of people going the other way.”