VIDEO: In Battleground of North Carolina, Social Media on the Minds of Voters 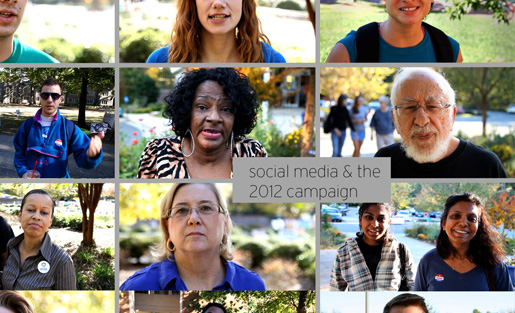 I like to talk politics. So during the final presidential debate, I found myself circled around my television with friends, dissecting the minute details — from the slow pace of Barack Obama’s speech to the sweat on Mitt Romney’s lip — that make such an event worth watching.

And then it happened. Obama told Romney, “We also have fewer horses and bayonets,” in response to an attack on the size of the Navy. I needed to know what people outside my small group of friends were saying about this. So I grabbed my phone, scrolled through my Twitter feed, and read an endless stream of tweets about the line.

Some voters tried to avoid political chatter online, and were even quick to de-friend someone who posted too much or about a candidate they oppose."
ADVERTISEMENT
Click here to read entire series

One of the most significant developments in the 2012 election is that people are using social media both as a source for news and for political discussion. From links and headlines being tweeted out by news organizations, to political chatter being posted by everyday users on Facebook, people are engaged with politics on social media.

I was curious to see just how widespread this development had become. So I set out near my home in the diverse Raleigh-Durham-Chapel Hill region of North Carolina, one of the so-called battleground states, and I asked voters about how they used social media for campaign information. Their answers revealed some unexpected trends.

People have become more engaged with politics through social media. The voters I interviewed spoke about everything from interacting with campaign websites, to posting their own opinions, to sharing satirical images — or memes — with their friends. Some voters tried to avoid political chatter online, and were even quick to de-friend someone who posted too much or about a candidate they oppose.

Perhaps the most significant development this election is on Twitter. In 2008, Twitter reported 100 million tweets per quarter. Today, that number hovers around 400 million tweets — per day. And with this exponential growth, Twitter has become a hub for political dialog. The voters I spoke with relied on Twitter as much or more than they did on traditional news to get reactions and analyses from the debate. Just check the hashtag #horsesandbayonets.

Joshua Davis is a multimedia journalist and documentary videomaker. His work has been honored in the FotoweekDC Awards, the College Photographer of the Year Awards, and North Carolina Photographer of the Year competition. Joshua recently earned his master’s degree in journalism from the University of North Carolina at Chapel Hill, and previously worked as an editor on projects for RollingStone.com, PBS Frontline, Arte and the Travel Channel. He has served as adjunct faculty at New York University, coached the 2012 Carolina Photojournalism Workshop and taught courses as an Apple Certified Final Cut Pro editing instructor. In his free time, Joshua enjoys traveling and practicing Spanish. Follow him on Twitter @joshabla and see his portfolio of work here