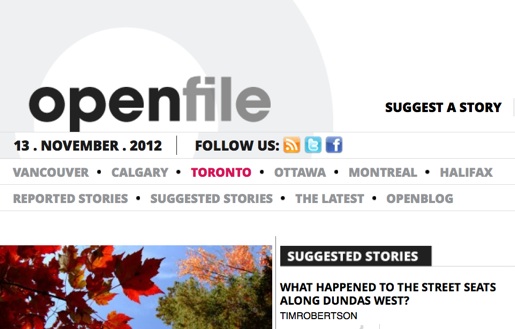 OpenFile announced Sept. 28 it was stopping publishing for a few weeks to reorganize.

The bank accounts of OpenFile, the Canadian “community-powered news organization,” are frozen and freelancers still haven’t been paid, but founder Wilf Dinnick says the innovative journalism network will return in 2013 — or before.

“People have counted us out very early, and I would say we are still working really hard to figure this out in the best way,” Dinnick said.

We were chasing stories that weren't our expertise. We became more of a traditional publisher. That's what I'm trying to avoid right now." -Wilf Dinnick

OpenFile stopped publishing Sept. 28 for what Dinnick called a “pause” for a “few weeks.” More than six weeks later, many employees — including Editor in Chief John Ferri — have found other jobs, the site is still silent, and auditors are still reviewing the company’s books. In a wide-ranging interview with J-Source, the Canadian Journalism Project, Dinnick talked about what OpenFile learned in its first 30 months and how it will focus on custom content and corporate Canada in the future.

Too big, too fast

The importance of keeping accurate financial records was one clear lesson.

“Things were a bit of a mess in the bookkeeping, and we have to solve that obviously,” said Dinnick, who blamed money problems on growth and on an ambitious promise to pay freelancers within 30 days. “Too fast growth, too much. We spent too much money too fast.”

Most of the outstanding bills are $100 and $200 for individual blog posts, said Dinnick, but 10 freelancers are each owed more than $500. Dinnick said auditors have physically removed all of the books from OpenFile offices, so he couldn’t look up how much money the company owes overall, or how many freelancers are waiting for payment.

“We hope to have that money released very soon, probably in the next few weeks, but again it is up to an auditor when that is done and when the accounts are loosened and I can write those checks,” he said.

Let the audience guide you

The biggest lesson, said Dinnick, was that the audience is better at directing content than journalists. OpenFile was built on the premise that readers should suggest stories, not journalists. The website allowed readers to register and then suggest a story; OpenFile editors then assigned the story to a professional journalist.

Reader-suggested stories always drew more traffic than stories thought up by a reporter or editor, said Dinnick, but OpenFile sometimes lost sight of its mandate to follow readers, and tried to lead them instead.

“We were chasing stories that weren’t our expertise. We became more of a traditional publisher. That’s what I’m trying to avoid right now,” he said.

OpenFile’s audience connection can be measured several ways. The news site operated in six cities before it stopped publication. On average, readers suggested three to four stories a day — fewer than one story per city per day. On the other hand, traffic to the site was strong and the amount of time spent by readers on the site was extraordinary. In its last 80 days of publication, readers clicked on stories roughly a million times, said Dinnick, and each visitor stayed an average of six to eight minutes. That is much longer spent on site than the average for an online news portal. The next generation of OpenFile will abolish the registration system, said Dinnick, to make it easier for readers to suggest stories.

What’s next: focus on custom content and corporate brands

The biggest shift for OpenFile in the future may be the emphasis on serving corporate brands instead of just Canadian communities.

OpenFile is pursuing custom content deals in which it would provide stories for websites of media companies, consumer brands and other corporations. Dinnick said the Openforum site by American Express and the Coke 2020 YouTube videos are examples of the direction OpenFile is heading.

“What the brands want is to participate with the audience,” said Dinnick. “They would like those suggested stories.”

Dinnick also hopes to sell stories to major media companies in Canada and the United States, particularly custom content that is directly sponsored by advertisers. OpenFile sold content to the Ottawa Citizen and Postmedia before it went on hiatus, as well as DX3 Canada.

“We are producing content at a third of the cost of the newspaper,” said Dinnick. “And for the first time in publishing history, the content is just as good.”

Dinnick is looking for two things: clients for OpenFile content and a new media partner with an established sales force.

He said he has been talking for a month with two U.S. media companies about investing in OpenFile.

“We want to find a strategic partner, someone who has sales channels.  When we look at growing OpenFile, I don’t want to invest heavily in my own sales network. That’s ridiculous for us,” he said.

In the meantime, the first task is to pay the bills.

“People say, ‘When is OpenFile going to come up and start again?’ I can’t in good conscience get OpenFile started again and hire people until we have everything balanced out,” he said.

Dinnick said he hopes to have the accounting issues resolved within a month, but isn’t making any promises about when freelancers will be paid or when the news organization will relaunch.

“It’s like juggling 13 balls and all of them could fall or one of them could fall — I have no idea. One thing I have to say about this experience: Running a startup is like being punched in the face every day. You have to wait to see what’s going to hit you next.”

Kelly Toughill is associate professor and director of the School of Journalism at the University of King’s College in Halifax, Nova Scotia. Prof. Toughill is an award-winning journalist who has worked at newspapers in California, Florida and Ontario, and was deputy executive editor of The Toronto Star until 2006, when she shifted her focus to journalism education. Prof. Toughill has a Bachelor of Arts (Journalism) from San Francisco State University and a Master of Business Administration from Queen’s University in Kingston, Ontario. Her research area is the intersection of business model design and editorial mission. She is the editor of the Business of Journalism section of J-Source.ca.

This article was originally published on J-Source. J-Source and MediaShift have a content-sharing arrangement.