Why Newsweek Needs More Than Just a Digital Shift 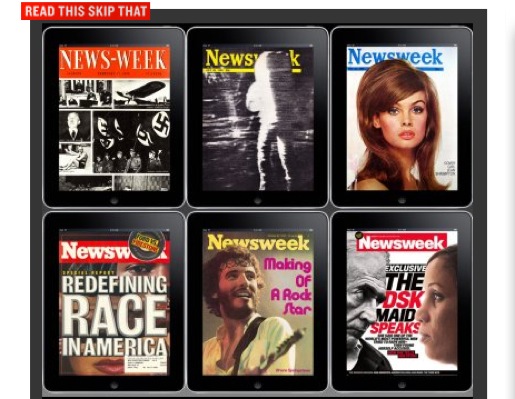 Editor-in-chief Tina Brown and CEO Baba Shetty announced Thursday that Newsweek will halt publication at the end of the year to shift to a digital-only publication.

Newsweek’s cover story last week declared that “Heaven Is Real,” at least according to a previously skeptical neurosurgeon who recovered from a near death experience, and lived to write about it.

As they turned themselves into a retread mix of hype, polemics, and celebrity book excerpts for the sake of competing with web-journalism, and/or with Time, they lost the plot."

After the announcement on Thursday that it’s killing its print edition at the end of the year, I can’t help but wonder whether the newly disembodied, spectral Newsweek will ascend to that Heaven, or will instead be hurled into the fiery depths of hell for sins against journalism.

And they’re not likely to sort out their salvation by going digital.

The summer of sin (journalistically speaking)

Newsweek’s covers this summer may have boosted circulation, but, nonetheless, the vultures were circling. Newsweek announced that the Internet was making us crazy, that President Obama was a failure, that Lance Armstrong was a hero, and, finally, that Heaven is real. Although Tina Brown’s Hail Mary pass, or serial lateral passes, were sensational enough to momentarily drive grocery store aisle and newsstand sales, they were too quickly debunked to be truly controversial, to drive debate, or to make the magazine relevant again.

That their recent stories are contrarian isn’t the problem. It’s that their claims are wrong, their writing’s trite, and, as was well-noted when they ran the Obama hit piece, they don’t fact-check. It’s as if Newsweek sought to move toward American supermarket Tabloid-style, with a capital T, in the hope that someone with a cart full of groceries would glance at the bad angel, National Enquirer, that promised the modern equivalent of “Elvis is Alive” on the left, and then buy the somewhat better, if not particularly good, angel, Newsweek, on the right. That the covers managed to validate the deep, dark, subconscious fears, fantasies, and desires of under-informed, yet news-hungry, Americans was all likely part of a cynical marketing plan.

Truth be told, in their abandonment of serious reporting, in their increasingly brief stories, and in their lowest common denominator opinion passed off to the unsuspecting as fact, they abandoned print, and the conventions of print on which they’d built their circulation, a long time ago. It’s just that nobody told the guys running the presses.

Casting their fate to the digital wind, and realizing that they had nothing left to monetize, except for the steadily fading residual cachet of the brand itself, wasn’t a brave choice, as much as a desperate one.

In fact, aside from the clearly economic, we should look at their motivations for going digital-only. And, perhaps more importantly, we should consider what the Newsweek situation can tell us about what’s at stake industry-wide with the looming death of print.

Does an all digital Newsweek mean that they’ve escaped into a realm where there’s even less expectation of fact-checking, where errors can be corrected in real time on the fly, and where hits are driven by gaming SEO and rehashing celebrity gossip?

Or are they truly trying to get back to basics?

Will Newsweek once again run credible reporting, or will it be some sort of zombie, undead, altered daily beast that lives by regurgitating other people’s reporting?

There might be some hope if Brown and company take a break from listening to the owners and the consultants, and tune in to what readers want: news.

As for the rest of us?

Is there a lesson in the Newsweek story for the rest of us? Rumors are circulating that the Guardian is also considering going digital only. They might possibly pull it off, given their newsgathering infrastructure, and their commitment to quality reporting. That said, my fear is that we’ll be left, for the most part, with traditional newsgathering institutions reduced to brands, and with upstarts, that have no structural ability, training, or desire, to treat complex or breaking news.

Newsweek’s struggle is instructive. They gave up on the basics, ceded the battle, and invited the barbarians inside the gates, even while they were still publishing conventionally. As they turned themselves into a retread mix of hype, polemics, and celebrity book excerpts for the sake of competing with web journalism, and/or with Time, they lost the plot.

They may well rectify these issues. But they don’t necessarily have to in order to be economically viable. They might be seeking solace in cyberspace because the old rules don’t apply there. Or they may in fact be trying to make a lean and fast product that can be taken seriously again. We can certainly hope that they’re motivated by the latter rather than the former.

Andrew Sullivan’s excellent piece on Newsweek’s move to digital notes that the transition was the right thing to do now (and, possibly years ago). But, like most critics, he doesn’t acknowledge that the shift to digital is, unfortunately, more often than not, accompanied by a stylistic and methodological shift (and decline) of the sort that Newsweek’s already been engaged in.

Print Can Die – But Not Ethics

Print can die. But what can’t die is print infrastructure, apparatus, methodology, and ethics. Even in the face of the ruthlessness of publishing economics, a digital-only publication must find a way to sustain the print newsgathering methodology — and not just as a non-profit entity.

When Sydney Harman bought Newsweek from the Washington Post for a dollar, he did so because he understood that good reporting was vital to society, and, particularly, to democracy.

This fact seems to have been lost on Brown and the magazine’s other stakeholders.

When Harman died, his family didn’t want to throw any more money down a bottomless, and increasingly mediocre, pit. Nor were they keen on investing in what was essentially a hard copy of Internet noise.

Whether anyone will pay for its particular flavor of Internet noise, when it exists only on the Internet, remains to be seen.

What Can Newsweek Learn from Gourmet’s Move to Digital-Only? by Susan Currie Sivek