What Can Newsweek Learn from Gourmet’s Move to Digital-Only? 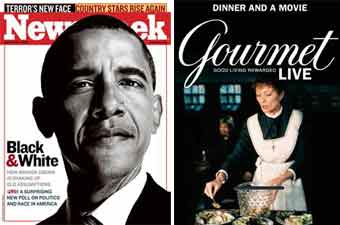 Will Newsweek's digital-only transition suffer the same fate as Gourmet's?

The big news in the magazine industry last week was that Newsweek, founded nearly eight decades ago, is moving to a digital-only product after a final print edition on December 31. The timing is remarkable.

Three years ago this week, I wrote my first piece for MediaShift about a similar announcement from much-beloved food and dining magazine Gourmet. After almost 70 years in print, owner Condé Nast decided to end Gourmet’s print edition and re-launch the brand in a variety of digital formats — including the app Gourmet Live, which I also covered here in 2010.

Though a newsmagazine and a food magazine differ, Gourmet's somewhat lackluster transition into these digital formats is relevant to Newsweek's possible fate."

So what’s happened since then to Gourmet — and what can Gourmet’s destiny tell us about what may happen to Newsweek as it joins Gourmet on the road to all-digital publication?

Gourmet lives in a few forms today: Gourmet Live, which is both an app and a website; Gourmet.com, another website; and special seasonal print editions.

Gourmet Live, the app released less than a year after the end of the print edition, promised a regularly updated stream of food content, plus intriguing social and “gamified” features. Juliana Stock, then the creative marketing director for Condé Nast Consumer Marketing, told me in 2010 that the app would “parallel the social aspects of a meal.” (Condé Nast initially scheduled, but then canceled, an interview about the current state of the Gourmet brand for this story, maybe because of another round of layoffs and reshuffling now underway.)

In 2012, however, the Gourmet Live app is a quiet dinner companion. According to a Condé Nast representative, the free Gourmet Live app has been downloaded 355,000 times, apparently during the app’s entire two-year existence. That seems a low number for a magazine that once had a print circulation of over 900,000. It’s worth remembering also that many people who download apps never revisit them after an initial download, so the actual engagement with the Gourmet Live app may be much lower.

A reward in the Gourmet Live app.

The content of the app — a weekly installment of articles and recipes — appears to be duplicated in installments on the Gourmet Live website (which itself looks like a relatively simple blog) and on Gourmet.com. These sites may be more successful than the app. The Gourmet Live website’s media kit states that the website receives an average of over half a million unique visitors per month. Gourmet.com, which mostly contains Gourmet Live content and magazine archival content, had over 1.6 million page views in September 2012. (Many visitors probably find the sites through searches for “Gourmet magazine recipes Thanksgiving” or similar terms, based on auto-completions Google suggested.) These numbers are miniscule compared to the site metrics for Bon Appétit and for Condé Nast’s Epicurious recipe site.

The number of visits to each of these sites demonstrates the residual strength of the Gourmet brand. Yet there seems to be little opportunity to interact with or engage with the sites. There’s a basic commenting feature that’s little used. For sites created by a major publisher with such a well-known brand, Gourmet.com and the Gourmet Live website feel much less dynamic and intriguing than the sites of many independent food bloggers.

Gourmet’s Facebook page is a more vibrant place. With more than 99,000 fans, there is plenty of activity on this page, with posts of archival material from the magazine, the occasional mention of new Gourmet Live material, and promotions of the seasonal special print editions of Gourmet. There aren’t immediately apparent connections to the Gourmet Live app. The Facebook fans represent only 10 percent of the print circulation the magazine boasted.

Is Condé Nast satisfied with the digital reincarnation of Gourmet as it exists today? There are still quite a few people using the app and websites, but these products aren’t especially intriguing, especially if a new reader has no special allegiance to the Gourmet brand. Gourmet fans might wonder if endlessly recycled archival material in various formats will be all the brand represents in the future.

Though a newsmagazine and a food magazine differ, Gourmet’s somewhat lackluster transition into these digital formats is relevant to Newsweek’s possible fate. Food content and news content are both now widely available, often in more intriguing and attractive forms, like searchable, customizable aggregation websites and a wide variety of innovative apps. The magazines face similar challenges in making digital content unique and appealing for an audience that is at once similar to and different from the audience they reached in print.

Though readers and critics appreciated the quality food coverage in Gourmet’s print edition, even that quality doesn’t seem to have attracted them to engage strongly with Gourmet’s efforts to innovate online under that brand. However, Condé Nast already had other interests in food media — not only print magazine Bon Appétit, but also an investment in food aggregation and apps with Epicurious, which pulls together food content from across Condé Nast and other sources. And food content is timeless, unlike news.

Newsweek is in a tougher position. As Devin Harner described here on MediaShift, the quality of Newsweek’s content declined in recent years. The well-produced hard news and opinion content it still contained was bundled with overwrought and soft news stories. That mixed bag of content was plastered with sensationalistic cover images that editor Tina Brown told The New York Times were intended to be “conversation starters,” but that critics and readers criticized.

Retaining print readers during a transition to digital will depend not just on quality, but also on emotional attachment to the brand. Gourmet’s readers had a strong attachment to the magazine and even continue to mourn the print edition. An August 2012 New York Times Media Decoder story asked readers to nominate the magazines they missed the most. Even after three years, Gourmet “was the dearest of the dearly departed — appearing in more than a quarter of the comments left.” Will Newsweek leave such a hole in readers’ hearts?

So, even though both magazines’ content has to some degree become a commodity available elsewhere, Gourmet probably had a better shot than Newsweek has at retaining readers through the print-to-digital transition. Newsweek has the advantage of three more years of audience movement toward digital news consumption, but also enters a crowded field of digital news products with established audiences who have already developed news consumption habits. The question is whether Newsweek’s brand alone, with its already diminished reputation, will be enough to disrupt those habits and build an audience.

Newsweek Needs to Stand Out

Newsweek’s proposed digital content — a tablet magazine called Newsweek Global, which will be offered as a substitute for current print subscribers, along with some free articles on The Daily Beast website — will need to be truly phenomenal to attract and maintain an audience willing to pay for digital news. The audience Newsweek says it wants for Newsweek Global — “a highly mobile, opinion-leading audience who want to learn about world events in a sophisticated context” — probably won’t be interested in its recent histrionic tendencies.

It’s helpful to look at a magazine with a reputation for strong journalism for comparison. The Economist now has over 100,000 digital subscribers, but it has also seen dramatic growth in its print subscriptions (with a circulation of over 1.5 million) and in its general visibility in recent years. Whether Newsweek is able to achieve anywhere near that level of digital success — without the name recognition and marketing opportunities a print edition provides — may depend on whether and how quickly it’s able to revitalize itself as a publication dedicated to serious, deep, solid reporting.

In the meantime, Newsweek continues its nine international print editions. Print media are still popular and growing in many parts of the world where digital technologies are less accessible. These international editions may sustain Newsweek during this time of transition as it tries to re-establish its U.S. brand in the digital world.

Gourmet’s diminished current presence has reduced Condé Nast’s costs and focused its food offerings, though its fans may pine for the magazine’s better days and wonder about other digital futures for the brand. But Newsweek will need to develop digital excellence rapidly to keep audiences interested — and paying — if it’s going to survive for long.