The Case for Unity Among Non-Profit, Community, and Public Media 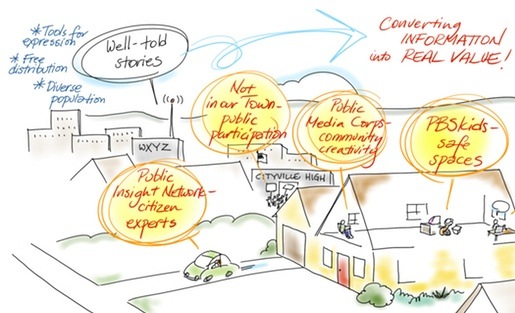 An illustration of the evolving public media ecosystem, courtesy of Jessica Clark and Ellen Goodman and made available via a Creative Commons license

The radically shifting landscape of media and technology has sparked a renaissance in non-profit and public media in the United States. As a perfect storm of economic and technological changes shakes the foundation of commercial media, journalists, funders, and local citizens are looking to public interest-oriented, mission-driven news organizations as a critical part of the solution. People who might never have considered a non-profit business model before — like longtime journalists and tech entrepreneurs — are launching vibrant, non-profit startups across the country.

As the non-commercial media sector grows in influence and importance, it's time to build a more connected and collaborative vision for non-profit media in America."

Making the Case for Unity

A new report by Free Press argues, however, that despite all of this attention, non-profit media has yet to become greater than the sum of its parts. They serve different, albeit intersecting, audiences. Their membership and funding varies. They focus on different topics or geographies. Having a diverse media system is important, but too often these groups also define themselves through these differences. Surveying the different models, missions and approaches in the non-profit journalism sector makes it feel less like a unified whole, and more like a collection of parts.

The report, “Greater than the Sum,” argues that we need to begin constructing a new identity for non-profit journalism and media in America, one that illustrates the central role these institutions play in our nation. In addition, we must examine the media policies that have for too long served to divide non-profit media by platform instead of connecting them around purpose.

The Changing Face of Non-commercial Media

When most people think of non-profit and public media, they picture NPR and PBS. In reality, America’s non-commercial media sector has long encompassed more than just those national brands and is growing more diverse and multifaceted every year. To understand the whole picture, we have to view public media as a network of non-commercial and non-profit institutions that share a similar mission: serving diverse, local communities by providing alternatives and filling the notable gaps left by commercial media. It’s a diverse and innovative network of online and offline outlets, professionals and ordinary people, who are serving communities and re-envisioning public service media.

Non-profit journalism and public media face very real threats in terms of legal challenges, political battles and other hazards on the path to sustainability. The ongoing attacks on public broadcasting funding in Congress threaten to undermine the very idea of the public trust that public media is based on. If Congress succeeds in de-funding NPR and PBS, it will send shockwaves through the entire non-profit journalism community.

Similarly, while recent events suggest that the IRS may be starting to approve non-profit news organizations after a long delay, there is still a lot of uncertainty regarding how their eventual decision will impact future organizations. At the same time, important local community media efforts like Low Power FM radio stations, Community Access TV and municipal broadband networks are locked in thorny political fights. As the non-commercial media sector grows in influence and importance, it’s time to build a more connected and collaborative vision for non-profit media in America.

We at Free Press envision at least six key categories of organizations that would be included within this newly expanded vision connecting non-profit and public media:

Each type of organization brings vital and complementary skills, expertise and infrastructure into the public media world.

United by Function, Not Divided by Platform

Ellen Goodman and Anne Chen, researchers at Rutgers University, offer a framework for rethinking public media through “a layered model of public media that maps onto the realities and capabilities of digital networks.” While public media policy has traditionally been structured around specific platforms — specifically radio and television stations — Goodman and Chen call for a “functions”-based approach that emphasizes: infrastructure, creation, curation and connection. A functions approach calls on news organizations to understand their strengths and collaborate around their weaknesses in service to the larger media ecosystem.

Thinking about the field of non-profit journalism in terms of functions rather than platforms encourages a kind of openness and collaboration we need right now. Whereas platforms divide media organizations into “radio people,” “TV people,” or “web people,” a functions approach recognizes that local communities need a range of different kinds of information and services. We all have a stake in the communications infrastructure that connects us to our communities. We are all creating content that crosses platforms, and increasingly we are all curating and being curated. And, especially in the non-profit space, we all understand the need to deepen our connection to community. In a networked age, it becomes even more critical for mission-driven news organizations with different approaches and focuses to collaborate (or at least communicate) for maximum impact.

Even the language we use feels imprecise for discussing these changes: non-profit, non-commercial, public, community, civic … to name a few. Instead of defining media organizations by their tax status or business model, we should define them by the function and focus that drives them: their commitment to serving the public.

It has been more than 40 years since the introduction of the Public Broadcasting Act, and technology, culture, society and the media have changed dramatically since then. We are at a unique moment where the energy and passion of America’s entrepreneurial spirit have begun focusing on non-profit news organizations and community media centers. We must seize this opportunity to rethink and re-imagine public media as a powerful public network. Now, more than ever, we need a vision we can begin working toward — and that vision should help unite public and community media, not leave them more divided.

Do you agree that it’s imperative to create a more unified non-profit media sector? What opportunities do you see for creating more unity? What obstacles might prevent organizations from collaborating more closely?