Social Media a Hotbed of Political Debate, Engagement – For the Good? 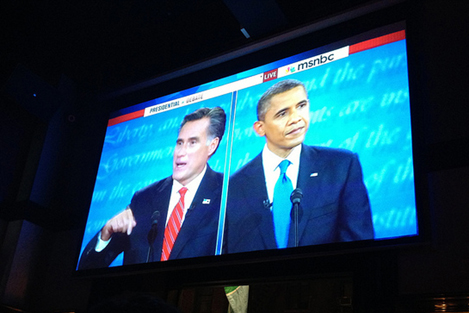 Since the last presidential election in 2008, the proliferation of social media users and mobile devices has brought a corresponding surge in political activities on social networks and Twitter. Two recent surveys from the Pew Research Center confirm this unmistakable reality: Social media is an increasingly active channel of civic and political engagement for Americans. And arising from this environment is an engaged, pro-active, and extremely influential group of social media users.

The presidential debate creates an environment conducive to the convergence of all the major ways of civic and political engagement on social media."
ADVERTISEMENT
Click here to read entire series

The “Social Media and Political Engagement” survey from the Pew Internet and American Life Project identified eight major ways Americans use social network tools (Facebook, Google+, LinkedIn) and Twitter to participate in civil and political activities. To Aaron Smith, senior research scientist at the project, the survey numbers are indicative of a growing segment of the public using social media vocally and pro-actively.

“People like talking about politics, and [social media] is another venue for them to share their excitement, interest, passion … about something that they think is important,” Smith said in a phone interview.

The segment Smith describes consists of 66 percent of social media users, which is 39 percent of all American adults. The eight major activities are summed up below, qualified by tendencies of specific demographic groups, if any. (Percentages are out of total social media users.)

The presidential debate creates an environment conducive to the convergence of all the major ways of civic and political engagement on social media. After the first debate, polling by the Pew Research Center for the People & the Press found that of the viewers who watched the debate live, 1 in 10 were “dual-screeners” who followed simultaneously on TV and a computer or mobile device.

Chris Peterson, a graduate student and research assistant at the MIT Center for Civic Media, is a member of this population segment engrossed in social media, actively creating political content on social networks and dual-screening the presidential debates. Peterson likens the experience of dual-screening televised political events to that of dual-screening sporting events.

“If it’s a football game, I’ll watch every play, but look down between plays to read analysis, laugh at GIFs, or post a reaction of my own. If it’s politics, I’ll probably spend most of my time looking at the thread and listening to what’s going on while commenting and reading other comments,” he said via email.

Peterson follows “Gameday Threads” on sports and politics forums, which he said “tend to be full of smart, funny people who are watching the same thing I’m watching.”

The likeness of sports and politics on social media is a widely observed condition. Smith from Pew said, “What we see in our social media research more broadly is that [social media] offers an avenue for really engaged people to go out and root for their team basically, and try to support their team and accomplishing some objective.”

Dual-screening allows discussions — celebration, outrage, determination of winners and losers — to manifest and spread in real time, a process that caused the Big Bird controversy to tsunami through the Internet before the first debate had even ended.

There are sensible advantages to dual-screening, i.e., sharing opinions and fact-checking in real-time, assessing diverse perspectives before the conventional wisdom is formed, etc. However, the merits of dual-screening are lost to some users, even those immersed in the social sphere.

Brian Feldman, a senior at Harvard University and a former BuzzFeed intern, is one such example. Feldman has previously live-tweeted TV events but more recently turned against it, especially towards political events.

He said via email, “It is easier than ever to find people who agree with you, and to shut out those who don’t. So if people are watching the debates and using Twitter only so that their political stances can be validated by others, I think that’s incredibly problematic and one of the biggest challenges in political discourse today.”

Feldman also points out problems endemic to Twitter as a communication medium. He said, “Some news outlets didn’t even wait until the first debate was over to declare a winner. To me, that’s like ending a game at halftime.”

Twitter’s 140-character limit is also a cause for concern.

“The constrained form of a tweet doesn’t lend itself to verbose, well-crafted arguments; it lends itself to contextless memes,” Feldman said. He’s referring to parody accounts such as @SilentJimLehrer and @FiredBigBird and the recent firestorm of mockery involving #bindersfullofwomen.

Feldman dual-screened the first debate, but was turned off by the jokes. “It now just feels like everyone in my feed is saying the same thing and trying to out-funny everyone else,” he said. He put away the laptop for the second debate.

title=”While only 5 percent of real-time debate watchers shared reactions online, the substance and reach of their comments matter.” />

The “1 in 10” dual-screening statistic is not large and only 5 percent of the overall debate audience reported sharing their own reactions to the debate online. Yet as evidenced by the explosive memes still propagating through households, the social media reactions of this small group of users are regularly achieving a much bigger reach.

“A small number of really engaged people can in many instances, at least from the point of an election campaign, be more powerful than a large number of people who are either passively engaged or are only marginally interested,” said Smith.

In fact, the Pew Internet and American Life survey found that liberal Democrats and conservative Republicans are more likely than any other group to post stories, articles, and their own comments for others to read. This certainly begs the question: how much of social media is influenced by polarized views?