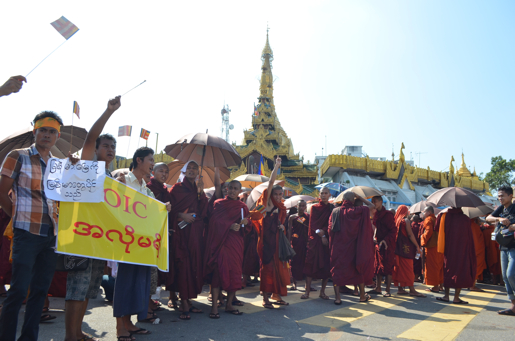 RANGOON, Burma — Even near-100-degree temperatures could not deter about 1,000 saffron-robed brown umbrella-carrying Buddhist monks from marching through Burma’s biggest city and commercial capital Rangoon last week, utilizing new freedoms to express their views in public in a way that wouldn’t have been permitted not so long ago.

The monks — accompanied by several hundred plain-clothes protestors — were railing against discussions between the country’s government and the Organisation of the Islamic Conference, over plans for the multi-national group to open an office in Burma after deadly June riots between Buddhists and Rohingya Muslims in the west of Burma.

Those riots were accompanied by an upsurge of vitriolic online commentary by ordinary Burmese, condemning some of the Muslims in harsh and often racist terms."

That violence was accompanied by an upsurge of vitriolic online commentary by ordinary Burmese, condemning some of the Muslims in harsh and often racist terms on Facebook and on blogs, highlighting what for some amounts to a darker underside to freedom of expression in Burma — freedoms that had been long-suppressed by government restrictions.

Speaking in the shade of the Sule Pagoda, a major Buddhist shrine and downtown Rangoon landmark, protestor Tun Tun, who described himself as “a Buddhist, from Yangon” (the official name for Rangoon), told MediaShift that “we don’t accept the OIC here; we don’t like them.” He alleged that “OIC supports terrorists. There are many terrorists in our country,” he said, referring to the Rohingya.

Some protests, such as last Monday’s, have been allowed under Burma’s reformist government and new freedom of association laws — though several other protests were not allowed recently — as the country’s reforms continue and the army takes up more of a background role but retains an effective veto in parliament through holding 25 percent of seats.

And as Burmese have relative freedom to express their views in public, Burma’s media too is operating under a less restrictive regime. A new press law is expected to be put in place by the end of 2012 or early 2013, meaning that private daily newspapers should be permitted in Burma. It remains unclear, however, whether ongoing restrictions — such as a ban on criticizing the state — will remain after the new law comes in.

Anticipating the new code, The Irrawaddy recently opened an office in Burma after almost two decades working from Thailand as an exiled media organization, unable to operate openly at home under Burma’s military government. But now the magazine has followed other once-exiled Burmese media such as Mizzima, and opened its office in Rangoon after the release of political prisoners and the holding of free and fair by-elections, among other relaxations.

CHANGED IMAGE FOR THE MONKS

Times have changed in other ways in Burma, however. Famously, monks in Rangoon and Buddhist-majority Burma’s other cities made world headlines in 2007 when bravely protesting in their thousands against military rule before being beaten and shot off the streets by the army. Hundreds were arrested and jailed in the aftermath of the protests, despite speculation at the time that the army would not dare touch the sangha,or Buddhist clergy.

But rather than getting driven from the streets, the monks are now driving policy, it seems, on the back of new-found freedoms to shout their views in public. In response to the protests, and in an attempt to show the world that it listens to freely-expressed public opinion, the Burmese government backed out of a deal to allow the OIC to open an office in Burma, known officially as Myanmar. Responding to the demonstrations — which took place in several cities in the country — the President’s Office issued a statement that the proposed OIC presence in Burma “goes against the will of the people.”

In turn, the OIC reacted angrily, telling The Irrawaddy, “We have already signed an agreement, but it seems the government of Myanmar [Burma] is not serious about humanitarian issues.”

The OIC visited the conflict zone in Arakan state in September and planned on opening an office to deliver humanitarian aid to the displaced, which include tens of thousands of Rohingya, a Muslim ethnic group that is denied citizenship by the Burmese government, and the subject of the protestors’ “terrorists” depiction.

While not reversing the decision to stop the OIC opening an office in Burma, President Thein Sein said on Sunday – in a rare press conference – that he acknowledged the need to allow humanitarian assistance into the country to help the displaced, before posing for photos with dozens of Burmese journalists.

For some analysts, however, the protests and ensuing reversal by the government smacked of a conspiracy and fait accompli — that the protests were instigated by government which could, in turn, justify stopping the OIC from opening its office.

Ingrid Jordt is a scholar of Buddhism in Burma and frequent visitor to the country. She told MediaShift that Burma’s military — which ruled the country for five decades and is still a powerful behind-the-scenes force in politics — legitimized itself by claiming to protect Buddhism against perceived foreign threats. “That was the principle expression of political legitimacy in the past by the regime. I would not be at all surprised to learn that this tactic is being employed again,” Jordt said.

MUSLIMS NOT KEEN TO TALK

Many streets near Sule Pagoda, such as this, are home to Muslim businesses. Photo: Simon Roughneen.

However, despite the relaxations of restrictions on press and public protests, Burma’s reforms are simultaneously allowing a more open venting of sectarian spleen and apparent brinkmanship. Monday’s demonstration wound up at the Sule Pagoda, which though a Buddhist shrine, sits close to some of Rangoon’s main Muslim mosques and community centers, on streets where skullcaps and adam’s apple-length beards are a common sight — all lending the event a triumphalist and provocative air.

Freedom of expression has its limits in Burma for some, it seems, as not everyone is convinced that it is safe to speak one’s mind. At several mosques and Muslim-owned businesses near Sule Pagoda, people were not inclined to talk about the march, or sectarian relations in Burma. “Everyone is away on hajj,” said a staff member at the Rangoon Jamaat-e-Ulema office, refusing to give his name or an interview.

Around the corner, inside the Iranian-built Mogul Shiah mosque, a Burmese Muslim man — who asked that his name not be published — said that despite the protests, relations were generally good between Burma’s different religious groups.

“Here we have mostly Buddhist, maybe 70%, and the rest 10% Muslim, 10% Christian, and others, but we always get on,” he said. Burma has not held a census since 1983, but estimates put its 55-60 million population at around 90% Buddhist, with Christian, Hindu and Muslim minorities making up much of the remainder.

But for the long-oppressed Rohingya, thought to number around 800,000 but denied civil rights in Burma, and subject to some vitriolic condemnation from ordinary Burmese on social networks in recent months during and after the June riots, there seems to be scant support from other Burmese Muslims.

“Only around 10% of the Rohingya are really citizens of Burma,” said the interviewee at the Mogul Shiah mosque. “The rest are all immigrants from Bangladesh, and they push too hard on the people there (in Arakan state) for citizen rights for everyone,” he added, a softer echo of a line peddled on anti-Rohingya blogs and in some Burmese media in recent months.

Simon Roughneen is a southeast Asia-based journalist who has reported from Burna several times this year. He writes for the Christian Science Monitor, The Irrawaddy and others. He is on twitter @simonroughneen and you can Circle him on Google+.