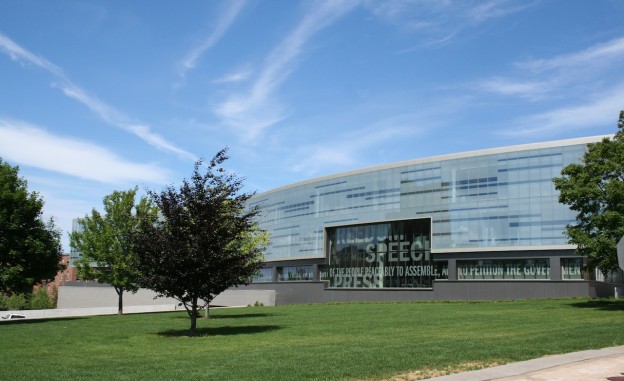 The Newhouse Center for Digital Media Entrepreneurship at Syracuse University was launched last March, and offers courses, mentorships and connections to startups. Image by rachaelvoorhees of Flickr.

Across the country, the news faithful are building entrepreneurial ventures from scratch, turning ideas about the future of media consumption into tangible operations based around revenue projections and audience targets.

That much is undeniable — and growing fast. Even newer than the emergence of this fresh crop of pioneers, though, is the concept of teaching what they’re doing as an academic discipline and attaching a set of curriculum to the pursuit.

I don't know how I could teach students how to create new, innovative projects and even startups when I'm not doing it myself." -Dan Pacheco

Media entrepreneurship is the shift of the moment at journalism schools, but as I’m learning, very much a work in progress.

“Like any startup, we’re a startup too,” said Jeremy Caplan in explaining the pivoting going on at the Entrepreneurial Journalism program at the City University of New York, where he’s the educational director.

CUNY is one of the first to tackle an entrepreneurship degree program from a specific journalism perspective. This month I started classes at an other nascent program, at American University.

And while scanning the syllabi for my first two classes, I decided to check in with Caplan as well as the leaders of Syracuse University’s visionary Newhouse Center for Digital Media Entrepreneurship to see how their efforts were faring.

Though CUNY and Newhouse’s programs started at roughly the same time, their approaches and setups diverge, reflecting that there’s no one-size-fits-all solution — nor should there be — for media entrepreneurship study.

Hitting the Ground Running with Ideas

Caplan said the Master’s degree is for mid-career journalists who want to get a more traditional graduate education with a concentration of their choice. That will be the crux of their first three semesters and the final one is centered on a handful of entrepreneurial and business-centered topics. For that semester the courses are: New Business Models for News, Fundamentals of Business, New Business Incubation, Technology Immersion and Media Apprenticeship.

With the certificate program, participants are particularly passionate about starting something new, whether it’s an app or never-before-seen platform for information. They’ll spend the semester devoted to making their idea happen and only take the above-noted courses.

“We like for them to come in with an idea,” Caplan said. “We expect that they’ll improve it and pivot as the program goes on but with just one semester it’s important to hit the ground running. This way they’re spending the time building and refining rather than just dreaming up something raw. Really, the execution is what matters most in the end.”

For instance, Caplan mentions student Ashley Milne-Tyte, whose project “The Broad Experience,” evolved into a podcast about women in the workplace. Going into the program, Milne-Tyte had a rough concept in mind about the subject matter but wasn’t positive about the form and whether a podcast set-up would be best, he said. She was able to flesh it out over the 15 weeks. (You can read more about Milne-Tyte and other CUNY entrepreneurial projects here.)

By the end of the semester the class works up business models for their ideas and pitches their concepts to potential investors. Caplan makes a distinction between business plans, which he sees as more drawn-out and traditional with precise numerical calculations, and business models, which focus on how the product will work, the customer base and some financial projections.

“We try to emphasize that it’s a process and a journey, so it doesn’t end one way or another,” he said.

Even though each student is responsible for coming up with and executing his or her own project, collaboration is a big emphasis. Caplan cites the fact that some of the entrepreneurs have more experience with the presentation aspect of explaining their ideas, others less. Some possess more extensive business resumes. A substantial number have writing, editing and more traditional media backgrounds, yet having a seasoned product developer in last year’s group, Adda Birnir, gave the journalists a different perspective and skill set to tap into.

“Part of what they’re learning is who to partner with, how to do project management, when to outsource,” Caplan added.

In terms of backgrounds, CUNY also allows its entrepreneurial journalism pupils to hail from and return to mainstream media companies, such as newspapers and magazines, or strike out on their own, depending on their individual goals. According to Caplan, it’s a way for the school to have a wider impact than just educating a small group of students; they can return to existing media companies and inject a sense of excitement and innovation.

The Newhouse Center for Digital Media Entrepreneurship, based out of Syracuse University’s School of Public Communications, was born last March. Sean Branagan, a 1980 Newhouse graduate and serial entrepreneur, is at the helm.

Unlike CUNY or my campus, American University, there’s not a strict degree program — at least not yet. The center offers courses, mentorships and an opportunity to connect with not only alumni who have created startups, but a wider net of entrepreneurs without any formal Syracuse ties. In a sense, people can get as much out of the Center as they’re willing to put in.

Branagan said he detected several years ago that the media market was changing, shifting to a “leaner, smarter startup culture.” In 2009 he talked to Newhouse Dean Lorraine Branham about putting the school’s mark on that shift with a center devoted to media entrepreneurship. Branham agreed.

It helped that Syracuse, as a wider university community, has had a strong entrepreneurial, startup focus for some time. As such, other programs, including the business school, were devoting classes to similar themed subjects; it was just a matter of doing the same thing within communications.

Through these courses, students looks at “tremors that would lead to trends,” trying to understand the larger media and information ecosystem, he said. There’s also an involved study of the types of startups it’s possible to develop so that students know what type of business best suits their idea and who is ideal to pitch for funding.

Not All Will Be Startup Founders

The culmination of this learning is to fully form the startup concept into a business.
Branagan said about a quarter of students really want to start something new, another quarter want to work for a startup in some capacity but not necessarily as the founder, and the other half “feel like they better know what the future of media will look like” and are preparing for the new realities of the market.

Unlike CUNY, Branagan, especially as someone who has launched new venture after new venture, really wants to move students in the direction of a startup.

“Some programs emphasize more of the innovation side or the academic,” he said. “We’re about the startups. You have to pick your focus and that’s ours.”

Besides Branagan, Newhouse has put a firm focus on bringing in entrepreneurs — not just in the past tense, but active ones — to teach. Dan Pacheco, who is a new instructor in media entrepreneurship (and contributor to MediaShift Idea Lab), said in an email exchange that the school made it clear that they wanted him to remain involved with his venture, Bookbrewer.

“First, my startup is still growing and I didn’t want to leave it and the user base in a lurch,” he said. “Second, I don’t know how I could teach students how to create new, innovative projects and even startups when I’m not doing it myself. This way I can always bring the most current information and skills to the students and know that I won’t be out of date.”

Newhouse also will be debuting a new course for visual journalists looking to understand the business end of their specialty.

“It’s designed to be an entrepreneur class for creatives,” said Bruce Strong, chair of the school’s Multimedia Photography & Design department. “A lot of our competitors produce visual communicators but leave the business part out of it, and that’s where the field is headed.”

Dena Levitz is the manager of digital strategies for the Newspaper Association of America while also pursuing a master’s in Media Entrepreneurship at American University. This is an introduction to a regular column she’ll be writing about what it’s like inside one of the nation’s new entrepreneurial journalism programs. Dena has freelanced for publications like the Washington Post and The Atlantic’s Cities website, been a news writer for the Washington Examiner and the Augusta Chronicle, and worked as a weekend White House stringer for Bloomberg News. In her spare time she enjoys drinking a hoppy beer, chomping on a cheeseburger or quoting from one of the Rocky movies.