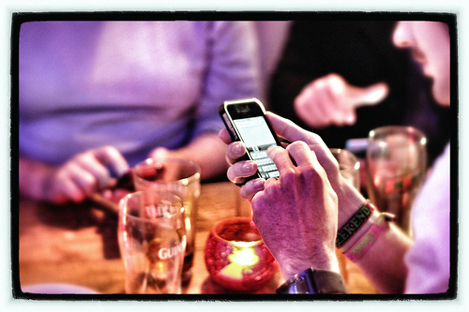 Think you’re the only one ready to throw your cell phone out the window the next time you have a dropped call or text spam? You’re not alone, according to a new report from the Pew Research Center’s Internet & American Life Project. The survey found that cell phone problems are a common reality for the 280 million users in the United States.

There are several ways people may attempt to remove cell phone nuisances from their daily lives. Step one is to contact your mobile carrier and request the available spam-blocking services.

University of New Hampshire student Feier Liu uses a non-smartphone and first called her mobile carrier to block a spam number about three years ago. The service was free, but only blocks individual numbers. Liu said she hasn’t received a spam call since. She is certainly a lucky one.

Another service introduced back in March also counts on mobile users to vigilantly report spam text messages. North American mobile carriers have adopted a centralized spam-reporting service, which collects spam complaints into a shared database to help carriers identify and stop spammers. In practice, users forward spam texts to the shortcode 7726 (or SPAM), prompting the carrier to request the spam number.

Allin Resposo, a web designer and smartphone user, has been reporting every spam text to 7726 since the service was introduced. Resposo hasn’t seen an obvious decrease in spam and said that the spam texts are never from the same number.

While smartphones experience more problems, they paradoxically enable more possible solutions. A search for “block spam” on Google Play brings up dozens of apps created to block spam calls and texts. Most of these apps have ratings of four stars or more and could be worthwhile efforts for Android users. However, because of Apple’s restrictions on developers, similar apps are not available for the iPhone, which, according to a prior Pew report, is used by some 53 million people in the U.S.

The Pew report stated, “It is against the law in the U.S. to place unsolicited commercial calls to a mobile phone when the call is made by using an automated random-digit dialing generator or if the caller uses a pre-recorded message.” Yet spam phone calls, like those offering free cruises to the Bahamas with a pre-recorded “[fog horn] This is your captain speaking” are as real as ever. Clearly, spammers are evolving faster than legislation.

In fact, they may be piggybacking on our mobile dependence. The report also noted that non-white cell owners experience all four of the common cell phone problems at higher weekly rates than white cell owners, possibly due to the fact that “African-Americans and Hispanics are more likely than whites to rely on their cell phones as their primary or exclusive phones for calling and for Internet access.”

Does all this indicate that more mobile usage equals more problems?

In a world where there are 14 million spam accounts on Facebook and probably similarly disturbing figures on other social networks, it’s not hard to imagine that spammers on these mobile-enabled networks will find a way to spam our mobile devices.