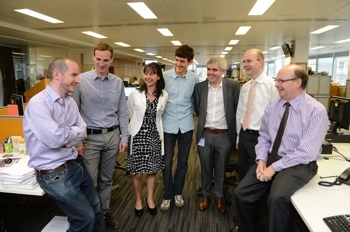 Do we define the future of the newspaper based on the product and its medium? Or do we look to the interaction between the product and the reader, and ask the digital realm to reinvent the relationship?

These are big questions, and the fundamental ones underlying the The Irish Times Digital Challenge, the latest attempt to transform the newspaper.

The Irish Times must think beyond the next website or product of 2012 or 2013, and beyond updates and iterations. It must literally invent the post-newspaper product."

The eight-week project follows five startups brought into the print institution’s offices. One winner will be named in September and awarded €50,000 (about $62,700) in investment, in the form of a convertible loan note.

Johnny Ryan, author of “A History of the Internet and the Digital Future” and the chief innovation officer at the paper, said they have already learned lessons from the process and want to be an example for others.

The Irish Times was founded 153 years ago thanks to the innovation of telegraphy, said Ryan, and must capitalize on the “new wave of disruption.”

“I think we must build on this success, and we want to help other media organizations beyond Ireland to learn from our experience,” he said by email. “Internally, we need to widen our bandwidth for working with startups further yet. Startup activity is booming in Ireland. And [the paper] can help support this ecosystem by using its customer base to support the best of the new startups to grow.

“The Irish Times was one of the first half-dozen newspapers in the world to launch an online edition in 1994. The Irish Times Digital Challenge is part of a process of re-harnessing this spirit of invention,” he said. “Bringing young entrepreneurs who think big and have no investment in the status quo into our building is an important stimulant to our own inventive spirit.”

Ryan said their request for proposals, which garnered them 81 submissions, looked for ready-to-run ideas from teams with “strong technical skills and working products.”

In the long term, he hopes to develop an R&D program that will involve The Irish Times in a research consortium and get startups involved at the paper even earlier in their lifespan.

Storyflow, which has already changed its name from the original Topify, creates a chart of related articles, “allowing the reader to quickly grasp the bigger picture behind any news story.”

PicTurk is a “fun way to run photography competitions online” and the founder, Paul Geraghty, said the Digital Challenge was a “win-win” because they are under-resourced.

GetBulb helps produce data visualization for both print and online, while MyiFli is designed to easily create marketing flyers for mobile devices.

Knockon.ie is an attempt to tap into the huge support for rugby and build a community around amateur clubs of the sport.

Ryan said The Irish Times is looking for two criteria for success: the “greatest impact on reader experience, and the greatest revenue potential.”

But he said the commercial success for the paper group is pegged to sustaining the editorial product. Since it adopted a charitable trust approach in the 1970s, he said, this changes the commercial drive behind such a digital venture.

The example for the Digital Challenge came from a more commercial one, with the PepsiCo and Mashable pairing in 2010, called PepsiCo10. This was designed to bring together digital startups and industry mentors and brands.

Ryan said he took an example from even further back.

“The RAND Corp., established in 1948, contributed much of the underlying
thinking to what would become the Internet,” he explained. “The RAND campus was built so that people of different disciplines and different teams were forced to cross each others’ paths.

“The idea was that they would cross-fertilize. I experienced this myself at the University of Cambridge, where the college system forced thinkers and experts in different fields to live and work together. Pixar’s headquarters follows a similar principle,” he said. “For The Irish Times, introducing highly motivated external startup teams to the building, and giving them a license to engage with anyone anywhere, is one step toward this cross-pollination model — a first step.”

The need to redefine newspapers

The newspaper challenges in Ireland are no different than anywhere else in North America or Europe. Last year, The Irish Times Ltd. made a pretax profit of €2.1 million ($2.6 million), compared with a loss of €28.3 million ($35.4 million) in the previous year, despite the fall in advertising revenues being suffered by all papers currently. But circulation fell by 6.2 percent in July-December 2011 compared with 2010, to just less than 100,000 copies.

Digital startups have yet to halt declining print sales, but do benefit businesses. And in the case of The Irish Times, they’re encouraging change.

“The presence of some of the startups exposed deep challenges inside our organization,” Ryan admitted.

“One in particular has a solution that should, in my view, revolutionize how we produce graphical content across different media,” he said. “However, there are blocks in our own internal structure that prevent it from doing this. Now, as a result, there is a general understanding that we have to change.”

So is the “new” digital reinventing the relationship with readers and customers for the “old” Irish Times?

“I suspect that there are no ‘old’ or ‘new’ media,” Ryan said. “There are only media. The question is one of mindset: Are you an inventor, and is your organization open to invention? The Irish Times is pivoting in this direction. “We need help from startups, and from benefactors and advertisers who recognize the importance of invention, who know that it yields dramatic, market-redefining results. The Internet has made information (of a certain quality) a plentiful and cheap commodity, but at the same time it has made trust and insight increasingly scarce and valuable.

“We are concerned about something far more profound than ‘going digital,’” he said. “We must define the future of the newspaper. The challenge facing newspapers is such that The Irish Times must think beyond the next website or product of 2012 or 2013, and beyond updates and iterations. It must literally invent the post-newspaper product. Having very early stage digital startups in the building has taught us some key lessons. It is clear that working with startups for the first time was a good idea for us, and should be good for other large organizations.”

Ryan said that four of the five startups will be working with the Times in the future, and that the Digital Challenge forced the Times to make some painful adjustments.

“The first step is to open your building to outsiders, and suffer the pain that causes,” he said. “This will highlight problems and opportunities that must be grasped.”

The winner of The Irish Times Digital Challenge will be unveiled on September 6.