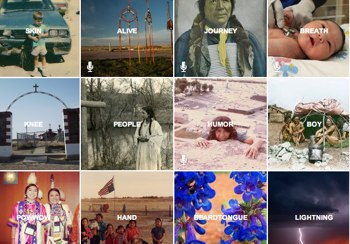 Sometimes, it takes more than one storyteller to get a story right — especially when the subjects of the story are members of a community that often feels misrepresented by media.

We found a way [with Cowbird] to make the story infinitely expanding. The only limitation is apathy." -Aaron Huey

The Roots of a New Storytelling Approach

After working with the Oglala Lakota people for seven years, Huey felt their stories couldn’t adequately be conveyed in the pages of a magazine.

“To make a really great narrative [in print] often means only telling the story of a couple of people, and trying to use those stories to tell the larger story of the community and where it’s going,” Huey said. “That’s often confusing for the community itself. People always asked me why I couldn’t fit in something about the all-star basketball team, or the scholars going on to college. Everyone wanted something specific and claimed that I was missing the entire story because I didn’t have those things. They felt like they were misrepresented. They felt like for decades in the media, they’d been misrepresented.”

While on a John S. Knight Journalism Fellowship at Stanford University, Huey reflected on this storytelling dilemma. He tried to build a multimedia platform himself that could be used by National Geographic, but he realized quickly that he didn’t have “the money or the expertise” for the job. But when he discovered Cowbird, an online storytelling tool developed by Jonathan Harris, Huey knew it was just right for the stories he wanted to tell.

“It was obvious that it was the perfect collaboration. I didn’t need to reinvent the wheel,” he said.

Cowbird allows people to tell stories with photos, audio, timelines, maps, and other media. Working together, Huey, Harris and the National Geographic team crafted a Cowbird story interface and embedded it into the magazine’s website.

Each block on the page tells a different story, from bits of tribal history to an account of one boy’s encounter with racism. One photo, titled “Rez joke #2,” shows Lakota men in line at a convenience store with the caption, “Pine Ridge traffic jam.”

Submissions continue to roll in. Huey screens each story to ensure that it connects to Pine Ridge or the Oglala Lakota in some way; stories are otherwise unedited.

“National Geographic was incredibly brave to run this unedited content and to trust me to do this right,” Huey said.

The magazine’s editor-in-chief, Chris Johns, said Cowbird and the “unfiltered voice” of the Pine Ridge storytellers were a natural fit for National Geographic. “This is a future that we’re terribly excited about and fully embracing. This just suits our DNA perfectly.”

For a magazine whose goal is representing often new, distant and unfamiliar places and cultures, this partnership has inspired thinking about new storytelling possibilities.

“I believe in the importance of letting people have their voice,” Johns said. “We want to hear the voices of others, the voices of those who were photographed, to hear what they feel about the work we are doing.”

Huey said this style of storytelling will continue in his own work, and he hopes it’s something more journalists will embrace.

“We can’t just put stories out there that are filtered through one or two people’s vision anymore,” he said. He noted that tools like Cowbird that enable multifaceted storytelling are especially useful for telling stories about a community likely to feel misrepresented by media.

“It’s the right tool whenever there is a possibility for people to feel misrepresented — when we as journalists are talking in big brush strokes about whole peoples or ways of thinking,” he said.

Huey hopes that the Pine Ridge project will contain more than 500 stories by the end of 2012.

“We found a way to make the story infinitely expanding,” he said. “The only limitation is apathy.”