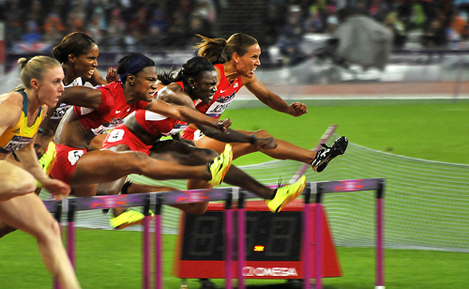 The London Games bred various controversies, including how three U.S. hurdlers are dealing with media tension. Photo by "Tom Kelly on Flickr":http://www.flickr.com/photos/tkellyphoto/7736572226/ and used with Creative Commons license.

The last medals of the 2012 Summer Olympics were presented this past Sunday, closing in on what could be the most controversial, drama-filled Games ever, especially online. From NBC and Twitter, to athletes and judges, virtually every party involved in the Summer Games has been written and tweeted about over the past two weeks — and not always positively.

Now that media coverage encompasses social media, athletes' task of managing their public image will only get harder."
ADVERTISEMENT
Click to read our whole series

The wide array of social media channels became an important instrument to gauge how the world felt about every element and moment of these Games, and because of that, the gripes that manifested and propagated on social media give interesting insight into how digital media has changed the way we experience the Olympics. Here’s a rundown, via Storify, of some of the more interesting controversies at the Games and how the social media world reacted.