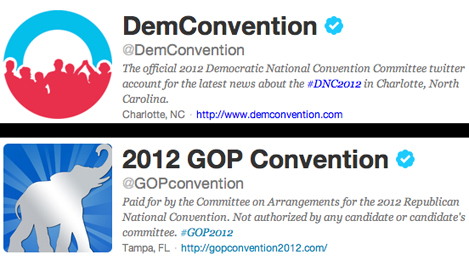 In anticipation of this year's Democratic and Republican conventions, both parties have opened up to the nation's social media constituency on a variety of platforms. These screenshots show the party conventions' Twitter presence.

The 2012 election season will gain a lot of momentum with the upcoming party conventions — the Republicans up first in Tampa, Fla., this week and the Democrats the following week in Charlotte, N.C. As with any major event happening in the past year, a lot of attention is given to how the online population will factor in.

As they bring out a platter of social media accounts, both parties are looking forward to engaging the masses in political discourse."
ADVERTISEMENT
Click to read our whole series

The party conventions are no different. All the networks, including PBS and C-SPAN, will be streaming the conventions online, and TV coverage will again connect viewers with what’s happening on Twitter. Also, as they bring out a platter of social media accounts, both parties are looking forward to engaging the masses in political discourse.

There is lot to anticipate as these party conventions unfold, and the following resources will help you follow along on the web and mobile.

Everything Changing For Convention Coverage

If you know a resource that should be on this list but isn’t, please share in the comments, and we’ll add them!