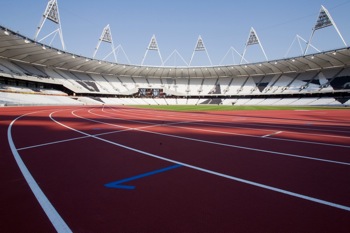 Amid the thousands of professional journalists gathered in London for the start of the Summer Olympics will be a handful of journalism students with the unusual opportunity to work in school-sponsored teams to cover the high-profile games.

Several U.S. universities have launched new programs to bring journalists-in-training directly to the scene of the giant international sporting event, where they have set up working newsrooms to create content for news media partners, school outlets, and in one case, for the U.S. Olympics Committee itself.

It's a great exercise for the students. The idea is to give them a great education in how to cover an international event, cross-platform." - BU's Susan Walker
ADVERTISEMENT
Click to read our whole series

News outlets the BU team will be reporting for include Boston’s CBS network affiliate WBZ TV and Radio. Boston.com, MetroWest Daily News, WBUR’s Only a Game, and other outlets in Providence and Worcester, Mass. The BU students will also tweet to their own Twitter account, and post to their own website, which launched July 25.

“We’re trying to teach real reporting…It’s a great exercise for the students,” said Susan Walker, an Emmy Award-winning TV journalist who teaches at BU and is supervising its London newsroom. “The idea is to give them a great education in how to cover an international event, cross-platform.”

[DISCLOSURE: I’m a graduate of Boston University’s journalism program, but have had no formal and little informal contact with the program since graduating 30 years ago].

The student team — made up mostly of broadcast journalism majors, with a few print journalism majors and one or two photojournalists — will operate as a multimedia newsroom for the partner sites and its own outlets, Walker said. That means tweeting, blogging, and filing video reports, still photos and audio slideshows, as well as written articles.

Walker also added that the first three weeks of the program were organized as a for-credit summer course into the history, politics and issues surrounding the Olympic Games, with the final three weeks of coverage structured as working internships.

“Student[s] need to learn the context before they go out to cover [the Games],” she said. For example, students learned about the history of women in the Olympics prior to covering one of the first female members of the Saudi Arabian team. They also did classroom work on the Munich massacre, Olympic judges, doping, and presidential politics around the Games, to create long-form reporting projects prior to the start of the games.

But Walker said her team is focused on carving out coverage of Boston’s “backyard heroes” at the games. One example is a video report on a Rhode Island boxer who barely missed making the U.S. team and must now decide whether or not to go pro. Another is a report on a local high school choral group that is raising money to go perform at the Olympics.

Walker is under no illusions her student journalists will get big stories that other journalists can’t, if only because her reporters could not be credentialed by the International Olympic Committee.

But the challenge of sidestepping Olympics security has already been the source of much resourcefulness in the team’s coverage, she added. For instance, students are getting information directly from Olympic athletes who are using social media to share their views on their housing, the Olympic Village, and more. They’ve also pigeonholed athletes crowding a nearby shopping mall in the days before the Opening Ceremonies. And numerous stateside interviews were also arranged, some with athletes even before they made the U.S. team.

A similar team of 16 students from the Scripps School of Journalism at Ohio University has also formed an Olympics summer abroad newsroom in London, where they will be reporting for a school-sponsored news site and Twitter feed.

Hans Meyer, a one-time community newspaper reporter who now teaches online and multimedia journalism at Scripps, called the school’s Olympics initiative “the perfect opportunity for students to take risks. They’ll be in an environment where there are a wealth of stories and reporters. I’m urging them to tell different stories than all their counterparts.”

His students will report a range of spot news, long-form features, and sidebars on local athletes, and he said he’s encouraging students to use as many multimedia tools as possible to experiment with backpack journalism. The stockpile brought on the road include digital SLRs with boom mic attachments, digital audio recorders, and video editing laptops.

Meyer said, “I’m pushing them as much as I can to think differently about their work… I really want them to try something they haven’t, such as video if they are primarily a writer, or social media tools, such as Storify.”

Like their BU counterparts, Meyer said the Scripps students dedicated themselves ahead of time to researching athletes of local interest, along with issues affecting the games. As part of the preparation, they took a spring semester course covering Olympic history, issues and media coverage, and Meyer worked with them on web-first reporting approaches.

Also like BU, Scripps reporters lack credentials, something Meyers said almost derailed the program before he got offers of help to submit one-off media requests for individual events and was reassured by sports journalist alumni that there were many stories beyond officially sanctioned events; students just needed to keep their eyes and ears open.

For instance, Meyer said he and student Melissa Wells were on a tour bus that was diverted off a bridge, so the two of them jumped down to start reporting, and then put together a soon-to-be-published story on a London cabbie protest.

Meyer added in an email from London shortly after arriving and getting online: “The most important measure of success for me, and I hope for the students, is the experience. As a reporter, I attended only a handful of events where there was more than one media outlet present, but I always remember those events as good gauges of my reporting ability. I could compare my coverage against those of more seasoned professionals and identify what I did correctly, and on what I could improve. For students, I think this opportunity is invaluable. I’ll consider the program a success if students come away knowing how they stand in their preparation for a journalism career.”

Testing the waters at Olympics trials

Among other Olympics-related programs is one at Penn State, where the John Curley Center for Sports Journalism has a sent a team of five undergrad and grad students to London to produce feature material for the U.S. Olympics Committee’s press service, as well as for a school outlet and as freelancers for news organizations (More here, plus a video).

Another initiative involved the University of Oregon. Prior to the games, the school’s Daily Emerald had a small team covering the Olympic trials in Eugene, an experiment publisher Ryan Frank wrote about earlier in a PBS Mediashift column.

Frank explained that for the project, “Our big focus was local athletes, especially ones with UO ties. Most of the fans were from within our region.” But he added that the team also tried to cover major news and tried to compete with the local professionals and the nationals for the big stories.

The project also aimed for a 50-50 digital-print mix, said Frank. One or two longer daily print stories were matched by a series of what he called short web-based “stub” pieces for each significant event as it concluded. He added that the team live-tweeted almost every development, that by the end it was live-streaming every press conference, and that it developed a stream of user-generated Instagram pictures of the action.